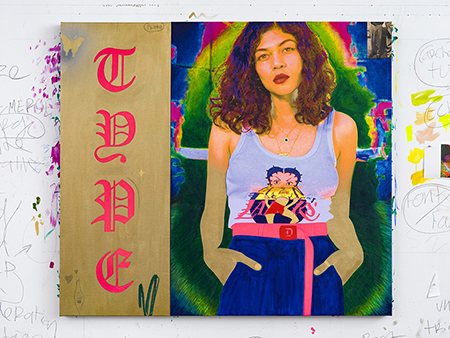 “Partial Pictures” explores family issues of class, race, addiction and serial imprisonment, while the sweep of the exhibition demonstrates Gabriella Sanchez’s profound aesthetic sensibilities. Her paintings, writings made with sharpies and graphite, sculpture, video and photographs address themes and styles from the past several decades. Working with portraiture, abstraction and graffiti writing, she mines her inner psyche to address the travails of her L.A.-based Chicano family.

For this first solo museum exhibition of 17 artworks, Sanchez describes artmaking as “a tool for survival” that she discovered in a college art class, while majoring in child development. After segueing to studying graphic design, she worked in this field for major manufacturers, for the Obama Administration and Planned Parenthood, honing her illustration skills while creating her own art in her spare time.

The selection of work here, created from 2017 to 2021, centers on investigations into often-painful family issues. Her portraits, several with abstracted, non-specific faces, are amalgams of people she has known. They tell of their harrowing life incidents and the concurrent pain, along with her personal self-reflections. Several paintings contain abstract backgrounds derived from Rorschach test images. All of the paintings contain words; her artistic approach is to write first and paint later. From essays of her personal life experiences, she incorporates words into her paintings. All the while, she is considering how particular words relate to images in the paintings.

“Enter/Home/Street,” one of Sanchez’s earliest paintings, depicts a man in profile, surrounded by the words of the title and by a prison inmate number. She created this piece while dealing with her father's history of going in and out of jail. The word “enter” reflects the fact that she was never certain if he was entering jail or coming home, or if he was in a dark place or coming out of it. “Open,” completed the same year, is a straightforward likeness of herself. The word “open” suggests that she is coming out of a tunnel, that she is striving to stay rooted, to maintain a level of self-determination, while staying connected to her family and roots.

One of the more complex paintings in this show is “First and Second.” It contains a cropped photo of her father in profile, a larger drawing of his face in dark green, an abstract image of a man’s legs wearing jeans, and a cropped photo of a Degas painting. The man’s legs and the legs in the Degas painting are in ballet’s first and second positions, elucidating the title of the work. (Ballet is a theme that she explores in other work, including the video “Baile Final" in this exhibition.) The painting also has an inkblot shape and the word “bail” in Gothic lettering. “In my work, aesthetic choices like font styles become political because they are considered in a cultural light,” she explains.

The compassionate “Proto/Type/Diana” is based on a photo of a friend. Sanchez partially flattens Diana’s face to conceal her identity — a characteristic of several other pieces. The painting also contains the words “Proto” and “Type” and a Rorschach test image in the background, which she explains evokes religious images. “From/Veronica/Form” is a classic portrait, based on a photograph, of a good friend who was pregnant. The words “from” and “form” refer to how she creates meaning within culture and art.

“So Much/Too Much” is influenced by photos of her grandfather and his brothers, with their faces fading into the pastel background, for protection, says Sanchez, as they have passed on or have police records. “Self Determination in Five Colors” is an abstract depiction of her uncle and his friends. The title portends a better future of hope and transformation for the artist and her family.

Sanchez’s “Flag (We Reap What We Sew),” a flag made from traditional Mexican textiles, contains photos of oppressed SoCal-based Chicanos, including those evicted to make way for Dodger Stadium over 60 years ago, and others who have been exploited economically. The title of the piece “can be an ominous statement or a rallying cry,” she says, adding that the artwork is about resistance and persistence, themes she has wrestled with throughout her life, that have enabled her to achieve so much by age 33.

Sanchez displays little or no influence of her Chicano artist predecessors: Carlos Almaraz, Frank Romero, Gilbert Luhan and others. She looks beyond their energetic brushstrokes, iconography, references to Aztlán, the mythical home of the Aztec people, and their mural practice, forging her own path as a contemporary Chicana artist, which involves delving into her personal and family psychological issues.