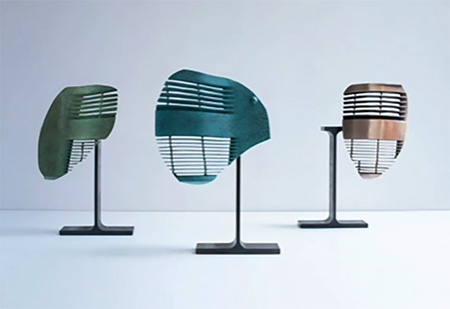 In “Low Fidelity” An Te Liu’s bronze, ceramic and steel sculptures juxtapose various packing materials and sports equipment into forms that feel at once familiar yet unexpected. Many of the works are cast from complex molds. Through cropping and selection, Liu fashions these materials into evocative sculptures that draw from his childhood while simultaneously referencing ancient artifacts and modernist sculpture.

Alberto Giacometti comes to mind when first taking in the installation. Carefully positioned in front of a central white wall are four works from Liu's “Stele” series that appear to emerge like poles or plants directly from the concrete floor. These thin, human-scale cast bronze pieces have different patinas and are slightly anthropomorphic. Although they have no discernible body parts, the sculptures allude to headless stick-figures.

In botany, the stele is the central core of a stem, while in archaeology it is a stone or wooden slab, taller than wide, erected as a monument. These pieces cleverly reference both meanings. While they are without doubt formal free-standing objects, they take their cues from nature. “Cactoid I” and “IO (Verschlimmbesserung III)” have plant-like associations. “Cactoid” resembles a desert cactus while “IO,” though more abstract and cartoon-like, also has cacti color and form.

The pieces in Liu's “Verschlimmbesserung” series are derived from the heads of massage guns. They have been enlarged, glazed in earth-tones, turned upside down and placed on pedestals, turning them into sensual and organic presences. By titling the series “Verschlimmbesserung,” a German compound noun that refers to "an attempted improvement that only makes things worse," Liu questions not only the desire for self-improvement, but also the process of making art that transforms one kind of object into another. There is also an implicit self-critique as to whether or not his sculptures are an improvement on the source objects at all.

Sporting equipment finds its way into “The End,” where a deflated bronze soccer ball coated with copper leaf intersects with a steel beam as if placed there to block the ball's trajectory. In “Over Time,” Liu casts the form of a disintegrated Nerf football (the first piece of sports equipment he recalls owning), which simultaneously evokes a pinecone or chunk of coral. “Restraint” is a bulbous leather and bronze shape cast from two boxing speed bags joined at the center to form a roughly hourglass shape. Like many of his recent sculptures, the source is easily identifiable. While the alterations are quantifiable, their purpose remains ambiguous.

Liu's sculptures often have distorted head-like shapes that can be seen as contemporary interpretations of ancient masks. In “Spleen,” a boxing helmet is set askew to conceal an unidentifiable mass. The green, blue and copper hued “Martin, Bruno and Felix” are head-like forms cast from the vent of an air conditioner and attached to metal stands. Presented together on a pedestal, these disembodied heads have an archaic appearance.

While the title, “Low Fidelity,” highlights imperfection and deterioration, these are actually beautifully crafted sculptures meant to draw our attention to strange configurations of everyday objects. Liu imbues throwaways like Styrofoam packaging and deflated sporting equipment with new purpose and implied meaning. He transforms mass-produced materials and products into unique and at times wondrous objects that reference Modernist as well as ancient aesthetic sensibilities as the means to root them in the present.