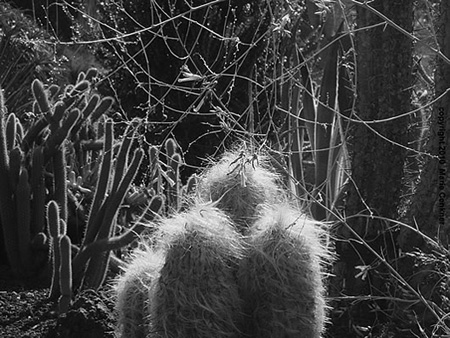 “Wilderness Mind: Dissolving Duality” starts from the assumption that we live on a planet where every place from the Antarctic to the deepest ocean is accessible and affected by mankind’s “civilizing” actions. As a result, what exactly 'wilderness' now means is a provocative thought.  Curator Deborah Thomas posits that old concepts about wilderness as a territory removed from humanity can no longer stand. Whether regarded as pure nature, wasteland or sacred space, she believes these traditional ideas represent a dangerous dualism of thought. It is an outmoded, even dangerous way of thinking that allows us to plunder and trash the environment because nature’s wild reality remains idealized and thus unscathed.

That’s a strong premise, and to address it in this exhibit Thomas offers us art whose scope and focus is on places near and far where detritus and detail reveal a wilderness under assault. Selecting artwork by fourteen of the Southern California Caucus for Art’s Eco-Art group, of which she is also a member, this show uses their various engagements with nature’s sights, sounds and denizens to probe the idea of wilderness. Rather than an isolated territory however, wilderness here is strictly a borderland where man and nature actively engage.

The premise can be felt most keenly in Marie Cenkner’s large-scale photographic installation of the body of a dead Barr owl. Offering us intense enlarged close ups of talons and feathers she presents the beautiful, seldom-glimpsed small bird as a kind of mythic phoenix rising above an image of its own body. However we are knocked forcefully from our aesthetic reverie by reading her speculation that the tiny owl was probably “caught in the back stream of a big-rig truck”, only found by the artist as she was trying to rescue baby turtles unsuccessfully crossing the same road.

Ulla Barr’s lush photograph of the kelp, bright plastic and silt at the tideline of Doheny State Beach after a raw sewage pipe rupture shows us the edge of the ocean as a landscape no longer benign but still visually enticing. A similarly potent mixture of the foul and the beautiful is caught in Sandra Muller’s lovely small, iridescent inkjet prints of Green Valley Lake’s gleaming, oily surface.

Water itself is one of the central threads in the exhibit and a clear battleground - be it the loud, burbling gush freighted with strange, unidentifiable floating pink objects in Carolyn Applegate and J.J. L’Heureux’s  “Water Wars” video; Hiroko Momii’s abstracted painting of vibrantly colored endangered corals or Annemarie Rawlinson’s tiny mixed media diorama made of skeletons of abandoned baby shorebirds that starved after an oil spill. Meg Madison’s juxtaposed pictures of rampant running sprinklers and a man buckling under the weight of five gallons of water he’s carrying home from the store powerfully opens questions not only about present water use, but also civilization’s future.

These and other haunting questions about survival are raised by the artworks that each approach wilderness as an intimate experience, rather than something somewhere else. The show’s suggestion that nature’s wild soul is a beleaguered presence in our incautious, civilized world is troubling. Yet that suggestion is essentially affirmed as we leave the exhibition site. Angel’s Gate is at an abandoned World War II army base, located on top of a windy bluff in San Pedro.  To one side are magnificent views of the wide-open ocean, on the other the steaming, streaming Port of Los Angeles. In a nutshell that seamless visual panorama is perhaps the most poignant argument to be made for the wild as a threatened borderland.