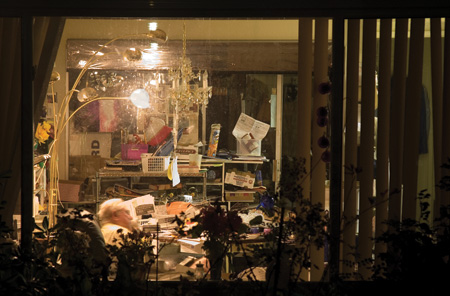 When Paul McCartney wrote his legendary, rooty-tooty ditty, “When I’m Sixty-Four,” he was a mere 16 years old. A born music maker and storyteller, pondering what life might be like for someone 50 years his senior seems apropos for one possessing such gifts of creativity and conscience. For the rest of the teen and under 40 population, however, considering the elderly usually goes only as far as determining how annoying it is to be stuck behind one of them in a checkout line or on the freeway.

In an exhibit that takes its title from Sir Paul's original, curated by Rebecca Trawick, eight artists eschew that type of pettiness and explore the various realms, elements and incarnations of the aged: depressed, lonely seniors and vibrant, never-giving-up the ghost folks; losses that come with advancing years; things left behind when souls are relocated (to facilities or to the afterlife); and the reality that, contrary to popular myth, not everyone becomes wiser with age.

That last item is particularly disturbing in "Loss Prevention," Jeanne C. Finley’s video piece on her mother, who, at age 79, was picked up for shoplifting at Walmart. Blurred images of the mother edited to voiceovers from her and Finley tell the story of a woman who’s been a sticky fingers since adolescence. Strict parents who denied her trinkets led to pubescent petty theft; this dregs of motherhood was given a thrill by shoving razor blades and non-dairy creamer down her children’s pants; and finally, the aged lady defends her current kleptomania: “I’ve worked hard all my life, and I think I deserve a little something extra.” It’s a moving and tragic tale worthy of a magazine or NPR essay, filled with powerful exposition – in particular, the response Finley receives when she asks if her mother’s made any friends at “shoplifting school” (one of the government-imposed punishments for being caught): “Who wants to get friendly with people who are thieves?” she says, rather shocked, and then vows to be more careful next time.

Peter Riesett’s series of digital prints of the interiors of an apartment recently vacated by a senior (for reasons unknown) are equally troubling. Empty walls are stenciled with dusty outlines of extracted pictures and religious icons. The dining room sports an untouched oval of bright green carpet where the table once sat. A garment bag sitting in an otherwise empty closet is filled with gorgeously dark fur coats that are no longer needed.

Taking us into the solitary worlds of the elderly, Gina Genis and Nancy Macko touch on isolations both external and internal. Genis’ series of digital prints look as though they were shot from the vantage point of a nighttime prowler at a senior community: looking in at the glowing little rooms we observe a man barricaded within a lifetime of memorabilia (when he passes to be referred to as “junk”), and a lady's apartment that is draped in handmade, flowery garlands in a fruitless attempt to warm the static, stucco box. The focal point of Macko’s series of collaged prints is a photograph of her mother back in the 1940s before she was snatched by the cruel hands of Alzheimer’s. Vivacious and beaming, the glamorous gal is at the height of life, and Macko celebrates what once was by adorning the images with dynamic and sensuous flowers, illuminating the soul that was, and that still remains.

Troy Aossey’s photographs of peppy Sun City senior cheerleaders spark a laugh, yet also pangs of discomfort. On one hand, it’s quite awesome to see spunky women in satin and sequins full of vigor and sass, but old ladies dressed up like youngsters inevitably turns them into silly novelties, and even the nicest “oh, look at that cute old lady trying to act young!” chirp doesn't come out the compliment it’s intended to be.