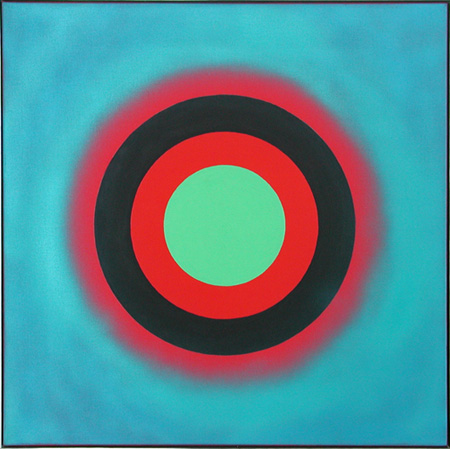 Kenneth Noland (1924-2010) is counted as one of American art history’s finest Color Field painters, a distinction well supported by this presentation of circle paintings from the “Mysteries” series. An attendee of Asheville, North Carolina’s bohemian and too-short-lived Black Mountain College, Noland was deeply influenced by instructors Paul Klee and Josef Albers.

From early on, Noland painted stripes, squares, and chevron shapes, imbuing those simple forms with radical color combinations and bold, contrasting hues. The development of his astonishing aptitude for color application and arrangement is often attributed to a visit he made to Helen Frankenthaler’s New York studio in the early 1950s. Noland was so inspired by her practice of staining raw canvas directly with acrylic paint that it led him to experiment  with similar methods, forging his own path of both ecstatic color and deliberately, sometimes fastidiously organized compositions.

"Mysteries" consists almost exclusively of concentric circle paintings — a total of eleven works done between 1999 and 2002. The colors are spare and sparsely applied so that pigment is gloriously central to the composition. Indeed, the wash of color leaves traces of penciled outlines that the artist later filled in and fleshed out. They have a calm air about them and are extraordinarily pleasurable to behold. Most of them contain brilliant colors, which instead of competing, form a clever and beautiful balance. Looking at the concentric circles of “Red Image” is like looking down onto a spinning top. Radiating from a subdued mint central circle are alternating rings of crimson, black, and fuchsia. The contrast between black and reds makes the work practically hum with energy; the painting’s tempo gathers strength as it reaches the staticy outer layers.

The marvelous large painting “Blues” is a (literally) shining example of Noland’s singular facility with contrasting, yet ultimately triumphant, color arrangements. It also highlights why, in the digital era, it’s crucial to see paintings in person whenever possible. Digitally, the work is a blue disc with a deep brownish-red color for a background. But up close, this background is a bewildering mahogany, a complex color that’s warm and otherworldly, rich and strange and utterly hypnotizing.

The late critic Robert Hughes noted of Noland that “his circle paintings, in particular, seemed to expel everything ‘inessential’ to painting ... since the circles were centered in square canvases, their form seemed gravity-free.” The broodingly blue “Indigo” is the darkest work of the bunch. It’s a painting that feels playful when considered alongside others that uniformly rely on strong contrasts. “Indigo” sends the retina down something of a rabbit hole; it’s not monumental like many others in the show, but its modest size belies a disarming, even ominous intensity.

As shapes go, the circle is geometrically basic, but Noland made each of his captivating, utter departures from the simple sphere, exciting and exacting in both their washes of unexpected color and in their precise, deliberate arrangements.