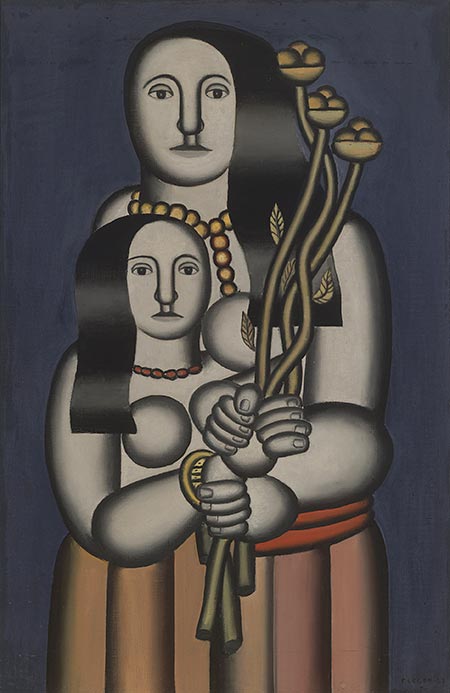 “Flesh and Metal: Body and Machine in Early Twentieth Century Art“ may conjure up a titillating mixture of science fiction and S&M; of exquisite torments and superpowers; of Robocop, Darth Vader, and the Robot Maria. But this is a selection of seventy-plus classic modernist works from the permanent collection of the San Francisco Museum of Modern Art, and perhaps (with a few exceptions) more sedate than titillating. Now closed for the construction of a new wing, SFMOMA has opened its vaults to Stanford University. Like the similar partnership show at the Contemporary Jewish Museum in San Francisco a few months ago, dealing with the spiritual aspect of modern and contemporary art, this show, curated by the staff of both institutions, with the assistance of Stanford art history teachers and students, recontextualizes old SFMOMA favorites that have historically been presented — historically. Here they are presented thematically, in four major groupings that define the modernist endeavor of reconciling art and mechanization.

The four categories are derived from iconic individual works: “The Object: Box in a Suitcase” from Marcel Duchamp’s traveling-salesman portable retrospective of greatest hits (attention must be paid, especially to the three-inch tall porcelain Fountain, sweetly whispering to its full-sized parent nearby); “The Imagination: Unsatisfied Desires,” from Salvador Dali’s oil-with-sand-and-seashells rumination on sex (or sexy thoughts) on the beach; “The Body: Human Concretion,” from one of Hans/Jean Arp’s biomorphic metal blobs; as for “Urban Landscape,” alas, I could not decipher my notes (scrawled with a borrowed kiddie pencil, as there were no checklists) well enough to find an artwork of that name. This last certainly sums up the mixture of utopian hope and dystopian fear that greeted modernity — a combination that remains relevant even in our postindustrial age. If the four categories sometimes seem a bit Procrustean, forcing the guest artworks into postures of unnatural extension and abbreviation, that’s part of the creative ferment of re-imagining (more on this later).

The phrase “flesh and metal” comes from Franz Roh (1890-1965), a photographer and art theorist who believed that reality did not have to be transcended by mysticism, but that, according to scholars (quoted in Wikipedia) analyzing his conception of Magical Realism, “the autonomy of the objective world around us was once more to be enjoyed; the wonder of matter that could crystallize into objects was to be seen anew." The world around us is already magical, i.e., worthy of aesthetic appreciation, could we but see it.

Museums are a microcosm of that living universe, of course, even if the modernists thought of them as mausoleums rather than treasure troves. (Maybe they can be both?)  In any case, this show encompasses major themes explored by modernism in an engaging, informative way; and the cultural treasures, many quote anthropomorphic, within an abstract form vocabulary, look as good as ever, and the huge number of issues raised by the show make it well worth the trip.

The war/dance between the sexes appears in some of the strongest works. Two Picasso oils in the “Objects” section, “Jug of Flowers” (1936) and “Still Life: “The Coffee Pot” (1944), despite their very different moods, depict still life subjects as pairs of male (jug, coffee pot) and female (fruit bowl, coffee cup) personages, with a sly erotic tension befitting the “Desire” section. Male obsession with the enchanting other also seems to be operant in Diego Rivera’s “Symbolic Landscape” (1940), depicting a colossal toppled tree trunk anthropomorphized into a kind of mutilated torso, accessorized by a fallen gauntlet, a blood-tipped dagger piercing a wedding ring, clenched-fist boulders, and undulating dead trees, in the “Concretion” section. In Paul Klee’s lithograph, “Man Without Love” (1923) a male contemplates coitus, past or present, by gymnastic puppets trapped inside his thought-balloon head. The most overt example of Freudian fantasy is Hans Bellmer’s “The Machine Gunneress in a State of Grace" (1937), a large tinted photograph of a disjointed-puppet sculpture that he made during World War II that combines the pathos of Chirico's mannequin-like figures — as seen in his “The Vexations of the Thinker” (1915) — with the aggressive, even misogynistic anatomical reconstructions of Picasso.

The newly restructured reality of modern life as shaped by the machine and mass communications is well represented. Fernand Léger’s “Two Women on a Blue Background” (1927), with its calm, composed subjects, serves as the centerpiece for the show, but so might have been his untitled mixed media collage, which deftly melds printed (an array of furnaces, a piano keyboard) with painted (stair-steps, a perforated drain) imagery. Stuart Davis’ painting, “Deuce” (1954), Joseph Stella’s “Bridge” (1936) and Lyonel Feininger’s “Manhattan, The Tower” (1944) each make a compelling case for modern urbanity and excitement. So do industrial abstractions by photographers Margaret Bourke-White, Paul Strand, Edward Weston and Charles Sheeler, who used his 1927 photographs exalting Ford’s River Rouge factory as elements for his cinematic painting, “Aerial Gyrations” (1953). Its flattened, overlapping high-contrast shapes are painted as impeccably as the industrial design of a Model A. Cameraless photograms (which might almost be said to constitute selfies of objects) by Man Ray and Laszlo Moholy-Nagy similarly elicit the magical, numinous aspect of everyday reality invoked by Joseph Stella (“I felt deeply moved, as if on the threshold if a new religion or in the presence of a new DIVINITY.”), Charles Sheeler (“It may be true as has been said that factories are our substitute for religious expression.”) and Marcel Duchamp, whose delving into the depths of the intellectual and the erotic has overflowed into contemporary art for decades. Having once said, "The only works of art America has given are her plumbing and her bridges," Duchamp would be gratified at what time has wrought.