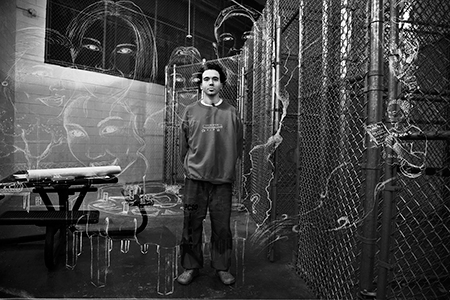 Social Practice has come into its own as an art genre, fueled by the tenets of engaging with marginalized communities and seeking social justice. This principle is exemplified in the work of Suzanne Lacy, Theaster Gates, and other contemporary artists who cross over into activism.

Right in step with Social Practice but on a smaller scale is Jane Lindsay, an associate art professor at Texas Tech University and a former counselor to parolees, whose cause is the disenfranchised community inside prisons. In gathering the visuals for her installation “From the Outside In: Sustenance and Time,” Lindsay spent several weeks visiting male and female inmates at the Adult Detention Center in Pinal County, Arizona. She taught them how to draw, she engaged them in conversations about their families — even spending five hours in a cell at one point. Just as important, she brought her camera.

The result is a moving exhibition that puts a human face on an otherwise forgotten prison population, reminding viewers that despite their crimes, they left behind loved ones and any semblance of a normal life. Lindsay’s art-making stems from “forgiveness and understanding,” she says in her artist’s statement. That takes on a certain resonance when viewers learn her story of forgiving the man who assaulted her child many years ago.

The installation consists of three parts, the most visually arresting being a taped-off section of the gallery that is about 10-feet-square, the usual size of a prison cell. The viewer enters the cell to see that the “walls” are several pieces of Plexiglas onto which composited images have been laser-cut. The resulting, ghostlike pictures superimpose portraits of the prisoners onto line-drawing depictions of their families, creating an empathy for their isolation and loneliness without becoming too maudlin.

A second part of the installation is a dining room-size table metaphorically reuniting prisoners and their families by displaying their letters and drawings for each other and through place cards. A birthday greeting from a child to her mother, for instance, is a reminder of the milestones in life that prisoners miss. On the walls surrounding the table are Lindsay’s intimate black-and-white portraits of various prisoners along with drawings contributed by the prisoners themselves.

The third part allows viewers to see the prisoners that they’ve gotten to know through Lindsay’s photography as they share their stories on video. Ben, for instance, who is Anglo and whose face is entirely covered with tattoos, reveals that the ink gives him “street cred.” In other videos, prisoners ask for forgiveness, understanding, and a return to their families, which goes to Lindsay’s burgeoning role as an activist, asking society to rethink its practices regarding incarceration.