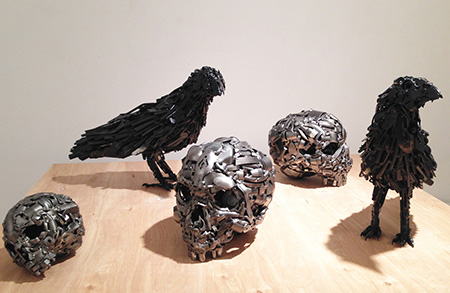 For his solo gallery debut Portland-based artist Travis Pond delivers 17 steel-assemblage sculptures. The San Francisco Art Institute graduate (BFA, 2001) works in an industrial park in Portland that makes it easier for him to collect all manner of metal detritus which is then transformed into cut-up pieces collectively titled “Northwest Wildlife.”

At first glance, Pond’s sculptures seem to recall numerous public artworks comprised of turned-in illegal guns, such as those by Victor Hugo Zayas (Los Angeles), Michael Kalish (Hartford, CT) and Sandra Bromley and Wallis Kendall (Edmonton, Alberta, Canada). However the resemblence is fleeting; gun violence is not the content of Pond’s art, nor are guns used. Rather, the perhaps more enduring issues of recycling and environmental pollution are evident.

Thus, unclaimed stolen bicycles from the Portland Police Department, materials from second-hand junk shops, leftovers from automotive repair shops, and even bullet casings are interpolated into the sculptures — but only after they have been cut up into much smaller, modular components. Along with such extensive material preparations, Pond then welds the thousands of elements into animal shapes. In this sense the works here resemble those of Seattle sculptors Sherry Markovitz and Rachel Denny, who glue and sew beads and feathers to taxidermy animal-head molds, which also happen to draw attention to gun violence against animals, not humans. In another sense, his accretive technique has been anticipated by a long pedigree of modern and contemporary artists from John Chamberlain (auto-wreck parts); Deborah Butterfield (wood scraps); and John Bisbee (steel nails). In each case, such strengths and novelties risk devolving into monotony and overfamiliarity. Since this is only Pond’s first show, it’s too soon to tell how long he will stick with this particular craft process.

After fusing the repurposed fragments into animal shapes — bear, fox, deer, elk — of varying sizes, the artist applies black patinas with a lacquer finish to seal each work, unite their disparate parts, and give each figure an eerie, semi-industrial or mechanical glow.

Appearing almost as if penned in or held in uneasy detention, the sculptures are mounted on unpainted plywood plinths so they appear both on display and ready to escape (or attack) at a moment’s notice. Besides those on the sculpture stands, three works are mounted on the wall à la Markovitz as trophy heads. “Bear Rug” is splayed out, already a victim. “Trophy Bear Head” and “Trophy Deer Head” have solemn, black-steel backdrops that reinforce a memorial tone.

Despite their slightly irritating, smaller scale that pushes a few too close to stuffed toy status, the black color symbolizes death all over the place. “Standing Bear 1 and 2” are, respectively, 19 and 16 inches high. “Teddy Bear Green” (with some spots of green) at 27 inches high straddles toy and actual-size proportions. The black paint reinforces doom, only to be undercut by the works' dainty, manageable sizes. “Cougar” and “Fox” are bigger, more dangerous and mysterious.

As one strolls into the smaller back gallery, a startling tableau of two crows and three gnawed-over human skulls counterbalance the potentially diminutive, cute factor in the front. Dignified yet gruesome and creepy, the crows own the plinth, proud of their human plunder. Seen together in this sort of grouping, Pond’s sculptures introduce a welcome dimension of narrative: human presence in nature is often at the mercy or behest of the wildlife.

The show is over-installed. Fewer of them would make the too cute works feel more monumental. The artist’s upcoming challenge may be to move beyond individual objects toward another kind of assemblage, that of installation vignettes that can exist outside the gallery, raising possibilities of meaning beyond recycling metals to draw attention to the precarious state of wildlife.