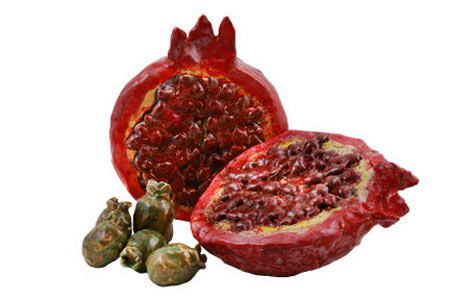 Four artists offer differing views of the domestic world in “Food For Thought.”  A special pleasure is Desiree Engle’s earthy ceramic fruits and vegetables that suggest the sensual delights of a garden plot in the backyard. These are chunky, humble pieces of hand shaped stoneware dripping with rich colored glazes that separate and clot on the molten the surfaces of produce on the edge of decomposition. If Ken Price’s recent ceramic works have refined the notion of the organic into a wonderfully liquid abstraction of oozing forms pimpled with skins of ultra controlled color, Engle’s naïve sculptures return the organic to the enervating messiness of overripe fruit fallen from the trees.

Kathy Breaux’s mixed media paintings of women placidly moving through tidy neighborhoods of red tile roofed bungalows, clipped lawns and well trimmed trees also have a naïve sensibility. Each clearly rendered suburban scene is vaguely childlike, presenting the doorways, plants and women’s faces in simplified, flattened, and richly colored shapes. Some, like the women’s hair, have the paint literally combed into the surface to produce a delightfully direct sense of texture to the liquidity of the artist’s paint against the flatness of the form. Reminiscent of Henri Rousseau, Breaux’s paintings exude a faintly magical sense of obscure narrative with odd abstract shapes drifting through the skies like symbolic ambient sound or fragments of words or fortune cookie papers rising like half remembered thoughts imbedded in the surface of the paint itself. It’s a peaceful, domesticated world.

The same can’t be said for Janice DeLoof’s paintings on paper of embossed chairs facing off like silent gunfighters in colorful but starkly empty living rooms. The artist has been exploring the tense silence of the domestic arena for years. These new airbrushed pieces pump up the color, adding to the work’s inherent theatricality and the tension created by a large, depopulated room marked with raised welts of low relief made by silhouettes of small pieces of furniture pushed into the surface. Less suggestive and more cryptically illustrative is the way the artist has begun using the room’s normally vacant paintings and TV screens as Kandinsky-esque emoticons. By adding an array of small, hand drawn abstract linear shapes to these rectangular voids the artist seems to be trying to ‘speak’ further emotional content into the scene. However that visualized effort only makes the quiet room’s overall suggestion of an internalized narrative seem less reliable.

Janet Adam’s multi-media paintings on paper of birds, bugs and landscapes allude to the magic of recognition and wonder. Small and intimate they present us with charming images that we want to muse over. Adam’s paints in a watery, thin scrim of color that seems to be losing hold on the surface of the paper. That delicacy adds a note of tender vulnerability to images of a single cloud floating above an intensely green hill, a white heron standing on one leg beside a long highway or a gold crowned bird ‘found’ in the black and white bark of a winter aspen tree. More than the roughly painted, found-lumber cruciform assemblages that accompany them, in these paintings we sense the unscripted, delightful ‘suchness’ of the mountains where the artist lives.