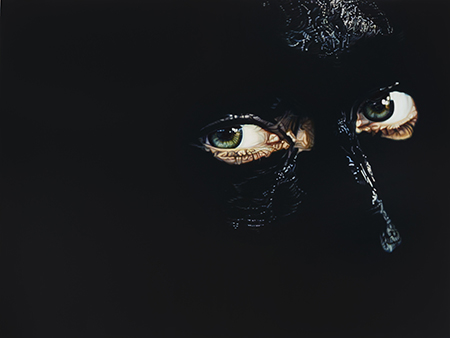 Political art is generally a tough sell in an art market that tends to favor safer, “timeless" subject matter. It’s also hard for artists to convincingly balance the sociopolitical and aesthetic aspects, so that they balance and, ideally, merge indissolubly. Art as sloganeering shortchanges the need for visual impact, while art that leans too heavily toward the formal aspect can be accused of exploiting (even with the best intentions) the issues of the day, like the disease-of-the-month TV dramas of yore.

Ana Teresa Fernandez aptly manages those competing imperatives, making art about feminism and immigration without falling into the traps of art-celebrity worship or academic obscurantism. Fernandez is a very good painter, and avoids the hectoring tone of overly theoretical art. The artist herself is both charismatic and down-to-earth. At a recent talk at the San Francisco Art Institute, a former teacher recounted how her fellow students unanimously volunteered to help paint a mural during a rainy Bay Area winter.

Her current body of work, “Erasure," examines the social invisibility of those deemed marginal by media tastemakers, like the recent black victims of African terrorism, who do not rate the coverage accorded to white victims in European tourist towns or the American homeland. Cited in the gallery press release, Bay Area cultural critic Rebecca Solnit writes: ”… ‘Erasure' derives from the 2014 disappearance of 43 young male students from Ayotzinapa, Mexico, ... presumably killed for staging protests that disrupted that small town. Fernandez pays tribute to these people, still missing and unaccounted for,  ... hinting that the lack of justice ... is intentional.”

The erasure (or purification) of troublesome minorities is nothing new, of course, but just when we think we’re out of danger, the darker side of human nature and politics pulls us back in. Fernandez has made a video exploring the censorship of opposition or otherwise marginalized groups, depicting a performance work of literal denigration. In almost total darkness, Fernandez, dressed in a black tango dress (her signature outfit since the early, feminist works), paints herself black, the close-up shots accompanied by a soundtrack of amplified processed sound that emphasize the physicality of the dark muck and the inhumanity of the process. The glistening black paint runs down or is splattered on the artist’s arms, legs and shoulders, reading as blood or oil. Blackened shots of her face, with only the eyes or mouth recognizable, evoke a feeling of claustrophobia of suffocation. Anyone who has seen Henri-Georges Clouzot’s classic 1953 thriller "The Wages of Fear" will remember the oil-covered man run over by his desperate co-driver.

Fernandez has isolated stills from her video, expanding these into large oil paintings. In one, one hand paints the other, in what could be interpreted as a sardonic version of M.C. Escher’s lithograph of reciprocal hands drawing each other. In another, the artist runs a paintbrush through her long hair. In a third, the artist, only her eyes visible, regards us sidelong, as if in reproach. Solnit compares the black backgrounds (derived from the video) to the black rectangles used on social media to protect protesters’ identities. I would go further back in time, to the darkness of Caravaggio and Goya, where human cruelty and folly generally prevail, though all too rarely shot though with beams of light and enlightenment.

Also shown are an installation and a sculpture. The former consists of cut-out letters in sheetrock exhorting the reader to listen as well as hear with “the labyrinth of the ear;” behind the letters are mirrors. The sculpture, a hand-built pine ladder of a sort found throughout Mexico, sits atop not four legs, but two rocking-chair runners: it takes teamwork for anyone and everyone to ascend, buckaroos.