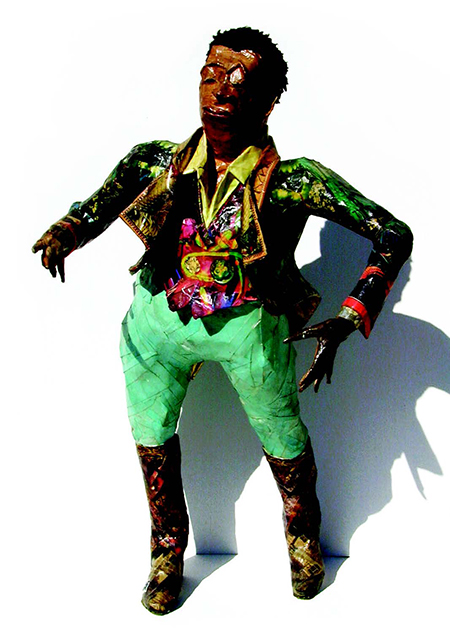 “Friendly Fire" is a selection of powerful and engaging pieces by some of Houston’s best sculptors. The exhibition opened as part of Sculpture Month 2016, whose purpose is to heighten the public’s exposure to art in three dimensions. According to Station Assistant Curator Ashura Bayyan, “Friendly Fire” is “a guidebook for survival and building communities. It’s an exhibition about compassion, resilience, and above all, resourcefulness.” Other words that come to mind are political, spiritual and idealistic.

The phrase “friendly fire” refers to an attack by a military force on its own men or women, usually by mistake. The artists, for the most part, seem to have used this opportunity to show some of their more social issue-oriented work. Forrest Prince continues his critique of consuming meat and fish with a table for two set with black plates, black goblets, even a black fish on a platter. He uses his familiar cross motif to express his spirituality and criticize various negative aspects of society. The latest cross is a large standing sculpture housing some 200 law books reconciling justice with the law. There are also several signature mirrored pieces containing quotes such as “The life you live conceals the light you are” or just the word “love.”

A massive installation by Noah Edmundson fashioned from rusted metal and found objects draws attention to society’s obsession with guns and violence. The dominant piece is a collection of weapons created from panel saw blades mounted on metal poles. An altar-like pedestal displays a war helmet containing a desert crucifixion scene, complete with hovering angels. In another part of the gallery are several monumental towers holding aloft large airplanes, think 9/11. Edmundson continues to push physical and social boundaries with these raw and muscular pieces.

Installation artist Kaneem Smith’s contribution is a cone of fabric suspended from the ceiling that we enter to hear a sound collage of remarks by President Obama, Hilary Clinton, Bernie Sanders and others. Robert Hodge’s large paintings with collage contain incendiary images that evoke racial protests, alongside figurative sculptures suggestive of Roman emperors. Hodge also contributes an ambitious installation titled “Few of my favorite things.” The centerpiece is a piano and bookshelf containing black literature and albums. Images of African-Americans hang on the wall or rest on the piano. An integral part of the work is an exhibition soundtrack he made by recording each of the artists in the show speaking, and in some cases singing.

Major works by Alabama Song, Regina Agu, Gabriel Martinez and Lovie Olivia complete this impressive show. Agu is a partner at Alabama Song, a collaboratively run artist space located in the historic Third Ward. The experimental collective believes that culture should be free to all, so their space features exhibitions, performances, workshops and screenings programmed with input from the surrounding community. The curator along with the participating artists are activists, all using their creativity to express their belief in the power of art to inspire and galvanize the community to do the right thing.