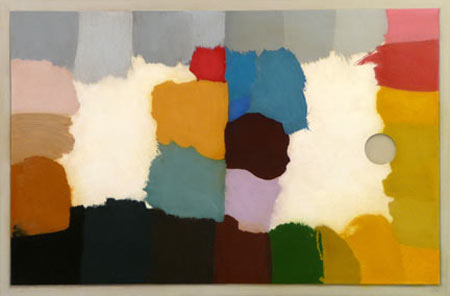 Like many in their retirement years, Boise painter and printmaker Charles Gill has shifted gears, i.e., living life at his own pace and focusing on personal priorities. For Gill, those priorities center around his Idaho studio, to which he returned in 1998 after 35 years of teaching at California College of the Arts in Oakland. In that time he has enhanced his reputation as an innovative artist by drawing on a lifetime of influences, mentoring, and experimentation. Despite awards, a fellowship, and museum recognition he remains stubbornly unpredictable and blasé about art market concerns.

Gill’s exhibit of recent paintings at Stewart Gallery is only his latest detour. A long-ago student of Richard Diebenkorn, he would later be associated with California photorealists like Robert Bechtle, and other Bay Area painters. But whereas his eccentric figurative subjects and architectural “drywall landscapes” remain his most familiar work in recent years, Gill’s investigations of middle-class visual culture has also found its way into conceptual mixed media and assemblage art in which he blurs the boundaries between abstraction and realism, memory and imagination. In this current body of work, Gill abandons realism altogether in a series of paintings which revisit his years as an Abstract Expressionist in the 1950s, an early period of his career in which the paintings of the New York School and non-objective art in general commanded his attention.

It speaks volumes about this artist that the source material for this series, which Gill calls “chip paintings” are simple index cards on which he daubs pigment to test hues for works in progress. These color notations often suggest works in their own right, and Gill’s eye for the cadence of colors and forms enunciates the formal implications of these apparent throwaways. In a technique borrowed from Chuck Close, Gill makes slides of selected cards, projecting them, flaws and all, on the working canvas.

Gill has described these abstractions this way: “paint chips as still life.” It’s right in sync with his propensity for turning houses, interiors, even people into still-life compositions. Indeed, several of the works here, like “Chips 102” and “Chips 103,” with their subdued tones and irregular contours, evoke the crowded, rough-hewn vessels in Giorgio Morandi’s still-life masterpieces.

But for the most part, these paintings have the vibrant presence of American abstract painting fifty years ago. Fresh and original, they hum with suggestions of Clyfford Still, Helen Frankenthaler, Morris Louis, Mark Rothko and others in orchestrations of earth tones, sensual pastels, robust blues and reds. In “Chips 206” and “Chips 207” dark, intruding forms recall Robert Motherwell’s somber “Spanish Elegies” series. In all there is a subtle and inviting light that seems to emanate from the work.

“Chips (kebab) 408” is perhaps the most commanding work of the group. A 5-foot long painting comprised of two adjoined canvas-covered panels, it is a richly painted, rhythmic composition anchored by a Guston-esque stack of abstract forms along the fault-line where the panels meet. Its serene, sensitively balanced design testifies to Gill’s ability to transform the humblest of subjects into something sublime.