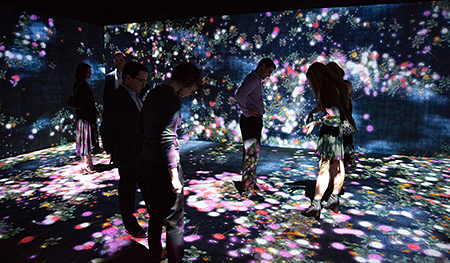 It’s magic. There is no other way to explain teamLab’s immersive installation “Flowers and People, Cannot be Controlled but Live Together – A Whole Year per Hour.” The Tokyo-based collective is not interested in explaining how they do it. All they share on their website is that the collective was founded in Tokyo in 2001 by Toshiyuki Inoko. The Center describes them as “operating at the frontier of art and technology,” and the piece as “an interactive installation: sensors respond to visitors’ movement, causing flowers to sprout, bloom and wilt in an ever-changing cycle.” teamLab calls itself an interdisciplinary group of ultra-technologists. The installation is neither a pre-recorded animation nor a continuous loop; the ever-changing digital installation is being created in real time by a computer program reacting to movement in the space.

The box-like space is relatively small, so only 10 people at a time are allowed in. One enters a short hall, turns 180 degrees and walks down a longer hall, which ensures that no exterior light enters the room. The next turn leads to a room filled with the images of flowers being projected onto the walls and floor, accompanied by a score created by Hideaki Takahashi. The constantly changing blooms create complex floral patterns on visitors’ clothing and faces, which compels them to take pictures of themselves and one another with their mobile devices.

The teamLab collective is made up of digital artists, programmers, engineers, CG animators, mathematicians, architects, editors, and web and print graphic designers, all collaborating on this remarkable production. Known worldwide, they are represented by major galleries and are in the collections of museums as diverse as the Borusan Contemporary in Istanbul, the Asia Society Museum in New York and the Art Gallery of South Australia in Adelaide. In 2015, one of their computer-generated pieces was even projected onto the façade of the Grand Palais in Paris.

Advances in technology make these types of multi-sensory installations increasingly complex and popular. The Museum of Fine Arts, Houston, offers an interactive exhibit each summer (last summer it was Yayoi Kusama’s "At the Edge of the Universe;" the summer before Philip Worthington’s "Shadow Monsters"). Venezuelan artist Magdalena Fernandez currently has a sound and light installation in a century-old cistern near downtown Houston. teamLab, however, is in a class of its own when it comes to these types of multi-sensory installations. Both brilliantly conceived and readily accessible, their work appeals to all ages.