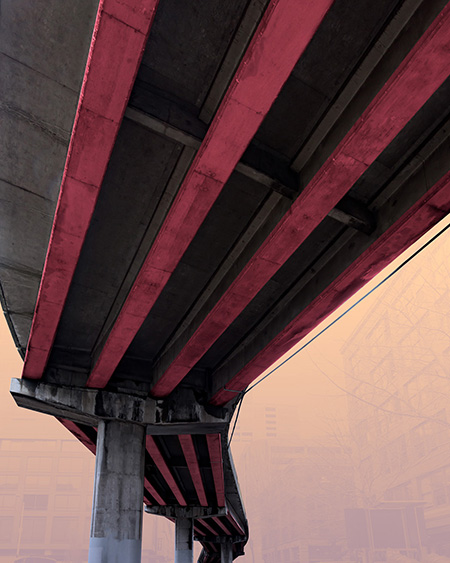 Before the art scene got going in the late 1970s in Seattle’s Pioneer Square, there was a bigger scene among young preservationist architects to rescue the post-Great Fire of 1889 architecture of Pioneer Square itself, which they succeeded in doing with 1975’s National Historic Landmark designation and subsequent flowering, decline and, now, resurgence of the iffy neighborhood.

Parallel to Elliott Bay, but perpendicular to this quarter of protected heritage facades and buildings, lies State Highway 99 — Alaskan Way viaduct (1954-2018). Artist Paul Komada, working on a King County 4Culture grant for 18 months, is showing the results of his deep excavations using performance art, painting, photography, video documentation, sound recordings, flag-making and hand-knit safety cone hats. Positing the notion that the viaduct is already gone, he is memorializing it in ways that will remain fresh and suitable after the scheduled 2018 demolition is completed.

The oscillating chaos and calm that Komada evokes is an entertaining antidote to the dreadful, endless construction and gigantic hole-boring sounds the high- and low-income residents of Pioneer Square have had to endure. The replacement tunnel is being built before the viaduct is removed. Komada’s two videotapes, one an artful documentary and the other a document of art-making, show sides to the legacy and inspiration of the 1.5-mile long structure that curves in an elegant way just north of the Pike Place Market.

Editing footage shot out of his car while driving over a year-and-a-half period, Komada turns road trip footage into glistening, mysterious art. When demolition and replacement by tunnel were announced, a two-decades-long campaign to preserve the groaning, seismically unretrofittable viaduct ground to a dying halt.

As ameliorative and clever as Komada’s strategies are — the other video is of the painting and sewing of a giant memorial banner based on the imagery of the beams and posts — it’s worth remembering in passing the ideas of the visionary Austrian architect Klaus Otto Bodenmüller, who lived in Seattle between 1973 and 1994. He returned to Vienna disgusted and discouraged at the city’s lack of practical futurism. Over the entire period of his Seattle practice he worked on a super-plan for repurposing the viaduct that was more ambitious and do-able than any of the other preservationist suggestions. In addition to a job-producing Datsun factory at the south end, there was to be a sculpture park on the upper level, a pedestrian boulevard linking the Pike Place Market and the stadium; housing for all income groups; and plenty of room for small businesses, restaurants and shops. It would have been a natural extension of the Market’s purview, but with a grand vista and outlook that breathed with communities and commerce.

The Bodenmüller plan haunts Komada’s meditations through its absence, the viaduct now condemned to misguided urban-planning oblivion except on one final level: it is the furthest northwest example of the deranged influence of New York City mega-planner Robert Moses, whose neighborhood-busting shadow is cast on Alaskan Way to this day. The problem with the viaduct is that it severed downtown links to the life-giving waterfront area, the city’s oldest area of industry and commerce, not to mention site of first encounters between settlers and indigenous Salish tribes.

Without the viaduct, new links, hinted at by Komada, could heal the 63-year rift between town and bay, hence the celebratory banner, “Bounty of Duwamish,” suspended at the axis of the L-shaped gallery space. One side is polygons painted over the blue tarp surface; the other is sewn, interlocking triangles and rays of blue, orange, red, white, purple and black. Behind the flag, hanging above one video monitor, is an inverted tent acting as flashing chandelier and symbol for the otherwise ubiquitous absence in the exhibit: the homeless population. We hear sounds of the tunnel drilling, mostly the unending dripping of water in the background.

The other monitor, wall-mounted, shows Komada dressed in white painter’s suit creating the banner. This alternates it with shots of viaduct de-construction and a huge redwood tree that reads as a symbol of the original site before the arrival of settlers, Indians and urban development. Komada wears one of the hand-knitted orange-and-white-striped “safety cone” hats on either side of the other monitor. All interconnected, like layers of the history of the viaduct — from Robert Moses to Klaus Bodenmüller to Paul Komada — the exhibit poses questions while entertaining and disrupting our expectations of how such subjects are dealt with: heritage preservation, urban planning, and the present dizzying rate of downtown development in Seattle. At least with art, the questions remain largely unanswered and are open to analysis and interpretation by the viewer.