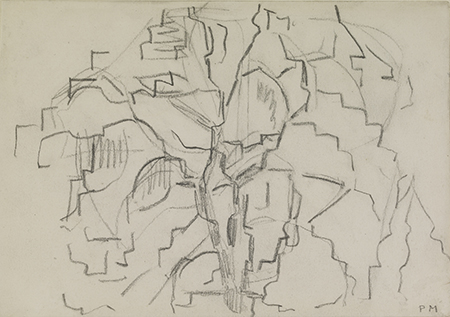 “A line is a dot that went for a walk,” Paul Klee once said. Replace “dot” with “thought,” and you have a deft thesis statement for this exhibition of 70 sketches that gusted across the pond from the British Museum’s collection of over 50,000 drawings. The formidable folio encapsulates five centuries of wandering charcoal and graphite sticks, with Michelangelo at one and contemporary artists such as Rachel Whiteread and Frank Auerbach at the other.

This very long line zig-zags and loops, eschewing chronological or stylistic groupings in order to examine different ways that drawing inspires and actualizes thought. The divisions are designated “The Likeness of a Thought,” “Brainstorming,” “Enquiry and Experiment,” “Insight and Association” and “Development and Decisions.” This format allows titans of Western Art such as Leonardo da Vinci, Albrecht Durer, Paul Cezanne, Pablo Picasso, Henry Moore, Barbara Hepworth and Franz Kline to cross pencils across the ages.

The show’s title recalls another recent exhibition, the Metropolitan Museum of Art’s “Unfinished: Thoughts Left Visible,” which presented artworks in various stages of completion. With the crossroads of creative decision-making laid bare, viewers were challenged to guess which gestures would have endured and which would’ve faded to ghostly pentimenti.

The artworks in “Lines of Thought” reside one stage further back in the artistic process — or at least a traditional conception of it. In these sketches, the lines were never meant to vanish under layers of pigment. Drawing is commonly considered a utilitarian bridge to other media, but here doodles are presented as vital skeletons that will support the flesh of masterpieces. It’s a small but surprisingly powerful thought pivot that gave me goosebumps when I came upon a 1913 drawing by Piet Mondrian.

“Tree Study” depicts a trunk and branches, marked out in faint lines that form the right angles of a loose but unmistakable grid. The piece represents an exquisite strand of sinew anchoring Mondrian’s early studies of nature and his mature geometric compositions.

Other dazzling entries show Michelangelo sketching out ideas for the “Last Judgement,” Durer playing with the position of Adam’s hand as he clutches the apple, and Peter Paul Rubens conjuring a winding chain of Italian Peasants lost in a lively dance.

To curate the show, the British Museum invited art students to explore its drawing collection and riff on its greatest hits. “Since the Renaissance, drawing has been the foundation of any artistic education,” read the show’s press materials. “Yet shifts away from representational art in the twentieth century have led many art schools to neglect a previously fundamental part of their curriculum.”

One would imagine that drawings by the stars of art history would form the foundation of this argument. It’s true that their centuries-old lines feel just as electric as those of the contemporary artists, though I’d argue that the newer work is what solidifies the show’s conceit. Behold the meandering crosshatching of “Study for Floor” by sculptor Rachel Whiteread, and the billowing lines of “Untitled, study for ‘Arrest’ series” by Op art pioneer Bridget Riley. Works like these present myriad ways that drawing can fit into the transdisciplinary practice of today’s experimental artists. In a world that has tumbled past post-irony, their marks represent simple, refreshing play.