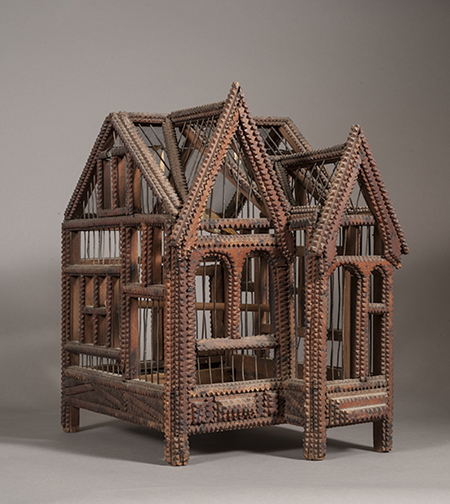 When it comes to art historical misnomers, the term "tramp art" is delicious. Originally deployed by artist and writer Frances Lichten in a 1959 article for Pennsylvannia Folklife, the expression describes a style of art that has little to do with ideas that label invokes: transient artists or craftsmen. Since Lichten applied the term, however, those allusions have been devilishly hard to shake. On a stroll through the 150 or so objects of "No Idle Hands” — all carved with supreme skill from the crudest of materials — it's easy to get swept up in a fantasy of industrious hobos setting up secret woodshops in rattling boxcars.

The aesthetic, which emerged in the late 19th and early 20th centuries, is characterized by the use of thin sheets of inexpensive wood that has been intricately notched and layered to form functional and ornamental household objects. Fruit crates and cigar boxes become the building blocks for furniture, wall hangings and even musical instruments, disguised with painstaking fretwork. Working class artists from the Northeastern and Midwestern United States, along with Northern and Eastern European artists, were the primary practitioners of tramp art. Despite its free-wheeling name, the style is in fact rooted in domesticity.

This is the first major exhibition of tramp art since 1975, a dizzying amount of time that is not surprising considering the art establishment’s general scorn for the aesthetic. Tramp art has been called garish in appearance, Byzantine in design and tacky in constitution. These judgments echo a larger clash between fine art and folk art, and explain why a lot of tramp art ends up in antique shops rather than museums. Lichten, author of the fateful essay, first stumbled onto an example of tramp art in a garbage pile and rescued it from disposal. Whether you like the aesthetic or not, this revival makes a powerful argument that tramp art deserves more respect.

The show is arranged somewhat chronologically, a format with clear trade-offs. It's charming to see the earliest examples of tramp art first. They're simple and crude but no less inventive than what came later, and they're also more obvious palimpsests of quirky, cast-off materials. Later examples of tramp art are considerably more complex, and harder to date because the labels from the boxes and crates are often fully obscured. The word "circa" peppers the wall text, exposing the show's primary flaw.

Contemporary examples of tramp art that conclude the show are by self-taught artists from across the nation, including Freeland Tanner and Angie Dow. If these objects — which invite us to consider the form's relation to other contemporary sculptural practices — had been woven backwards through the exhibition's historic displays, their effect would be greater. It's invigorating to consider tramp art as an aesthetic that's very much alive, carried on by artists whose stories align with those of their forebears. Tramp art is still created in garage workshops by regular people with extraordinary skills. However, on the far side of modernism and postmodernism, there's a new niche for this type of work in the fine art world. It's time for tramp art to revamp its reputation — and perhaps its name, as well.