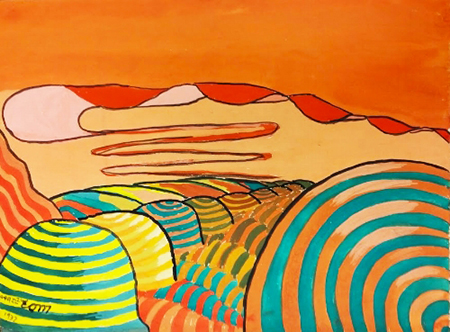 Eddie Owens Martin began the construction of his compound, Pasaquan, in Buena Vista, Georgia around 1955. In 2016, 30 years after the artist’s death, the Kohler Foundation, the Pasaquan Preservation Society and Columbus State University restored the site to its original glory. Painted in kaleidoscopic color, elaborately molded concrete walls connect a series of equally vivid buildings, adorned with Martin’s own visionary language. From the renewed fervor over Pasaquan’s restoration comes the current exhibition, “In the Land of Pasaquan: The Story of Eddie Owens Martin,” a series of the artist’s paintings, drawings and designed objects. While the exhibit does not epitomize the spectacle of the actual Pasaquan site, the works here provide insight into the nuances of the aesthetic practice and conceptual framework from which Pasaquan emanated.

Martin’s unusual life story is omnipresent in discussions of his work. Born to poor sharecroppers, he eventually fled his rural upbringing for almost three decades of living and working in New York City. Along with his artistic life of painting, drawing and studying museum collections, Martin also engaged in the underside of urban life, supporting himself through prostitution and selling drugs, then eventually fortune telling — a business that he relied on for the rest of his life. As a young man, Martin fell very ill, and in a feverish state, he had his first visions: individuals from a future realm anointed Martin the first “Pasaquoyan” on earth, and instructed him conduct his life within the peaceful credos of their homeland, Pasaquan. After these initial visions, Martin renamed himself St. EOM (pronounced “om”), and created artwork for over 50 years.

Like the Pasaquan site in Georgia, St. EOM’s oeuvre of art objects illustrates a fusion of the visionary and the concrete, the extraordinary and the recognizable. The artist’s self-education in New York’s museums resonates through the Western art references that pepper the show. “At the Ballet, New York City” (n.d.) recalls Degas’ blue dancers, while “Pasaquan Dancers” (n.d.) with their flattened, outlined forms, reminds one of MoMA’s 1909 Matisse masterpiece. Likewise, cues one would recognize from Eastern visual traditions and of the early Americas figure largely here, and in the architecture of Pasaquan: various mandalas, numerously-limbed figures like Hindu deities, pre-Columbian-ish geometry and metalwork.

Despite the familiar characteristics, St. EOM’s work is by no means a mere pastiche of historical lexicons. “In the Land of Pasaquan” is equally abundant in imagery that is entirely original. In a pyramidal installation of three watercolors, Pasaquoyan faces are rendered with high cheekbones, and sharp, delicate features. The hairdos of the figures, however, are integral to the artist’s intended meaning. Like a series of instructional illustrations, these detailed paintings are demonstrative of the artist’s belief that uncut, vertically wound tresses are antennas of sorts to the other realm, and a crucial tenet of St. EOM’s Pasaquan lifestyle.

Among the decorative grandeur and the exotic air of the Pasaquoyans throughout this exhibition are peppered exquisitely mundane moments: a pair of flowers in a vase; a simple, domestic interior. “A Bartender at an Outdoor Bar” depicts a man leaning casually on tiki bar, a calm, direct gaze directed at us, as if waiting patiently for a drink order. Everyday imagery like this tempers the fantastical nature present in other surrounding works, injecting a suggestion of plausibility — a glimmer of a train of thought that could lead one to ponder Pasaquan’s potential. Through this selection of artworks, the exhibition effectively explicates the journey by which St. EOM transitioned from making paintings about his visions, to making his visionary experience a physical reality in Buena Vista, Georgia.

Intuit: The Center for Intuitive and Outsider Art
LISTINGS