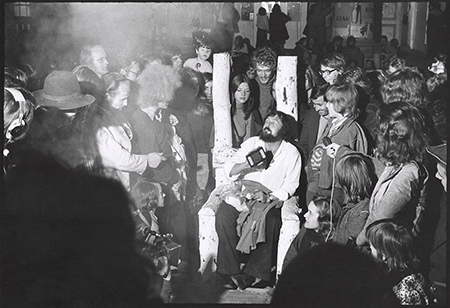 “Grandfather: A Pioneer Like Us” is a to-scale re-creation, displaying over 1200 objects, of the apartment of Swiss curator Harald Szeemann's (1933-2005) grandfather. Installed at the Institute of Contemporary Art, Los Angeles this exhibition is presented in conjunction with the exhibition “Museum of Obsessions” at the Getty Research Institute. Szeemann's grandfather was a hair stylist and a collector, after whose death in 1971 Szeemann gathered and stored the contents of his apartment, thinking it could become an intriguing exhibition someday. In 1974, Szeemann was able to stage such a show in a curator's flat in Bern, Switzerland. Now viewers can wander through a few rooms and hallways from the reconstructed apartment that contain such artifacts as hairdressing tools, family photographs, costumes, furniture and other ephemera of the time. The exhibition functions as a quasi-wunderkammer filled with personal objects that have both historical and universal resonance and appeal. Like many of Szeemann's exhibitions, it makes the personal public and gets us to think outside the box.

The “Museum of Obsessions” takes us on a fascinating journey through Szeemann's life and achievements, as culled from thousands of documents, objects and images from the Szeemann archives, which were acquired by the Getty in 2011. Curators Glenn Phillips and Philip Kaiser have mined the archive to select objects and artifacts that trace aspects of his personal life and curatorial pursuits. The exhibition is divided into thematic sections which assist in cross-referencing Szeemann's curatorial pursuits with his more spiritual and mystical interests. Like many exhibitions here, “Museum of Obsessions” requires time and multiple viewings to glean Szeemann's impact and influence on curatorial practices. His career at the Kunsthalle Bern, as producer of Documenta 5 (1972) and the 1980 Venice Biennale, and at the Kunthaus Zürich produced new approaches to viewing and thinking about contemporary art in a global context. Perhaps his most noteworthy contribution to curatorial practice was his idea that it is an artist’s right to be free from style, to create their own “individual mythologies” (ICA LA, Downtown; and Getty Research Institute, West Los Angeles).