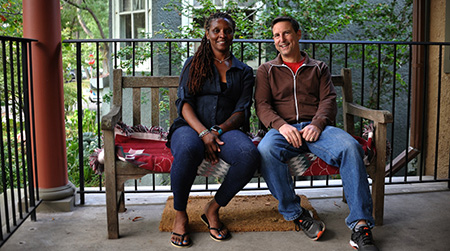 A squirrel crashes loudly through the bushes as a middle-aged white couple, Jon and Paula, answer Chicago artist Tonika Lewis Johnson’s questions about living in Rogers Park, a far northside neighborhood of the city. Next to them, Maurice, a young Black man, looks quickly over his shoulder before laughing, “In Englewood, that might be a dog!” The three Chicagoans are seated on the couple’s back porch on North Hermitage Avenue, and Maurice counters the self gratified answers of Jon and Paula with some critical points about the area around his home on South Hermitage Avenue, some 20 miles down the same street. Throughout Johnson’s video, other Chicagoans with correlating addresses on the north and south ends of Chicago’s city-long avenues, or “Map Twins” as the artist calls them, meet at one home or the other, providing personal, one-to-one accounts of life in such a segregated city.

While the “Map Twin” Interviews are the crux of this exhibition, “Folded Map,” Johnson’s photographs of properties on the northside and southside speak just as much to her message, though they’re mostly devoid of figures. “6925 N. Ashland” features a 100 year old church with cherry red doors and a matching fence that is decorated with playful, cut-out butterflies. “6900 S. Ashland” shows a bus stop in front of a bricked up, boarded up liquor store. “6329 S. Paulina” is a likewise boarded up two-story home with empty lots on either side; while “6330 N. Paulina” is carefully kept, with a leafy garden and an American flag flying. These pairs of property are architectural signifiers of Chicago’s well-known issues of class, race and geography as they pertain to the north and south sides of the city.

Across the back wall of the gallery, a mural-sized map of the city spreads floor to ceiling, edge to edge. Here, Johnson invites us to place a peg at their address, and run a string from their home to their “map twin’s,” winding around the center pegs at the north-south dividing line of Madison Avenue. A satellite image of the city, the map is packed with tiny buildings, conveying the enormity of Chicago’s population and the vastness of the ground it covers. As a viewer engages in the process of connecting her pin to that of her map twin, a simple and powerful realization occurs. Through this map, Johnson adeptly counters the conceptual boundaries of neighborhood lines with a more concrete connecting line: the very street we share. Imagining our own “Map Twin,” picturing this individual as our counterpart, is a potent emotional experience that eschews the rather detached rhetoric that abounds in the media, especially as it concerns discussions of the issues on Chicago’s south side.

Residents in Johnson’s “Map Twin” interview video speak about worries of hipsters and gentrification in Rogers Park and Edgewater; and of crime, food deserts and lack of recreational and cultural activities for young people in Englewood. The differences among the lives of the “map twins” are revealed in these conversations. Eyebrows fly up at the disparity in property values. Pangs of white guilt are palpable during discussions of peace and safety at home.

Each pair of the artist’s “Map Twins” quickly finds their common ground, too: pride in their homes and neighborhoods, and a desire for strong communities of neighbors. Johnson’s “Folded Map” project resonates because we can’t help but internalize the experiences recorded as our own, leaving us wanting to connect with our own “Map Twin” and learn their stories.