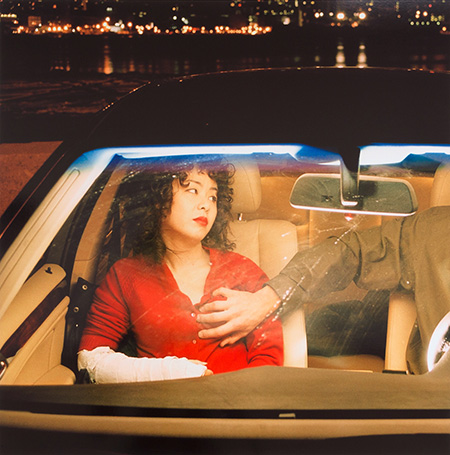 Nikki S. Lee’s photographs deliver a sly humor in their narrative fictions: if not always subtle, it’s a fun and funny romp through assorted cultural, sexual and racial contexts. In a dozen C-prints mounted on aluminum, titled “Parts,” from 2002-2005, Lee plays a different character, with different moods and affects in each mise-en-scène. In nearly every picture, however, she’s joined by a man, to a greater or lesser degree cropped out of frame. The settings are as benign as her own Jewish wedding, with her “husband” in full view, and as ominous as off-camera men feeling her up. Only an arm is visible in one, while in another all of the man, except his head, can be seen.

Now enter #metoo: these images from 15 years ago, dropped down into 2019, take on a fully reinvigorated relevance. In “Part (2),” in which the ingénue’s breast is being groped, it’s more caricature; but in “(14),” when an arm is around her shoulder in the back of the cab, and in “(28),” when her companion casually drapes his hand over the crotch of her skirt, we’re witnessing symbols of possession and submission. That may now sound outdated as described, but the images still bear significant potency and even complexity in their visual language.

“Parts” exude verisimilitude. We’re at least initially not even clear as to whether these are images of photo vérité; at least we may want to believe (in some cases, as in a celebratory moment with newborn child and partner, or petting a Golden Retriever sitting in a shopping cart in a Home Depot kitchen section) what we’re seeing is somehow a snapshot from Lee’s real life. It’s the degree to which Lee directs her male counterparts into such secondary, if not necessarily marginalized, status that really makes “Parts” something of a revelation. It’s one thing for an artist, a photographer, to make herself her own muse; it’s a not uncommon trope. But to so cleverly maneuver the patriarchal men in Lee’s characters’ lives into the margins, whether as supporters, collaborators or menaces, that make this work timeless.

The single-channel video “Scenes” (2014), which runs in the project space, features Lee making out in different settings with different men over the course of 48 minutes. The kissing scene that I caught, with a guy on a rooftop, possibly in Hollywood, felt like an endurance performance as opposed to anything filmic; it got hard to watch after just a couple of minutes. If the video, and Lee’s performance in it, shares anything with “Parts,” it would be commitment to going all in with the character. An odd twist to Lee’s career is that she apparently is back in Seoul, where she was born and grew up, working on films. It’s an appropriate close to this phase of her story.