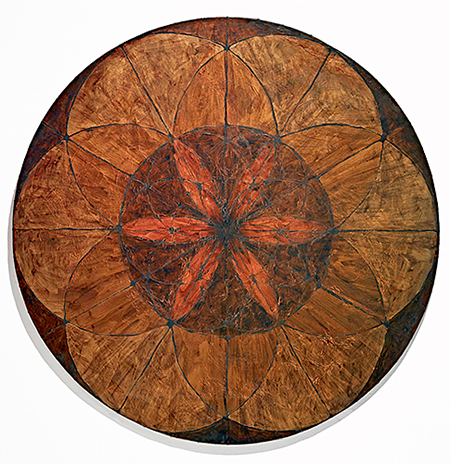 One of the curious by-products of our hurry-up-and-surf times is what might be called techno-nostalgia. The young hipsters in my neighborhood buy vinyl records and turntables. A remnant of photographers cling, or choose to return to film loading cameras and the darkroom. Such hankering for old technology is a rejection, at least in some quarters, of the easy proliferations of digital culture. More important than such residual resistance to present reality is the cultural embrace that translates outmoded irrelevance into a positive regard for the past. Swept away are the uninformed extremes of ironic condescension or excessive nostalgia. Appreciation for what once was not just new but advanced opens willing minds to fresh possibility and a more meaningful critique of what is dominant today. Let’s now expand this perspective as it applies to art. Or, more specifically, avant garde art.

San Francisco’s Dilexi Gallery (1958-69) was an integral part of the North Beach Beat scene in the storied 1950s and 1960s. Artists now legendary among aficionados of postwar California art formed its core. Its importance in showcasing avant-garde work made it the northern-California equivalent of L.A.’s Ferus Gallery. It helped develop a serious contemporary art market in then-provincial San Francisco. Coinciding with the recent celebration of Lawrence Ferlinghetti’s 100th birthday, the old — San Francisco’s countercultural art scene at a time when it was subversive, adversarial and genuinely bohemian — is new again.

Rebecca Solnit notes in her wonderful history of the era, “Secret Exhibition: Six California Artists of the Cold War Era,” that Dilexi, founded by Robert Alexander (a friend of artist Wallace Berman) and James Newman (a friend of curator Walter Hopps), took its name from the Latin, meaning “to select, to value highly, to love.” The exhibition “Dilexi Gallery: Early Years” is the first of a number of multi-venue retrospective exhibitions planned to be held at Crown Point Press in San Francisco; and at Parker Gallery, Parrasch Heijnen Gallery, The Landing and Marc Selwyn Fine Art in Los Angeles. Clearly, the profile of Dilexi’s West Coast heritage is about to receive a welcome reassessment.

The exhibit at Brian Gross Fine Art concentrates on works shown in the gallery’s first five years, from 1958 to 1963. Early paintings  and drawings by John Altoon, Joan Brown, Jay DeFeo, Sonia Gechtoff, Wally Hedrick, James Kelly, Craig Kauffman, Robert Morris (before minimalism and conceptualism), Ed Moses, Manuel Neri and Leo Valledor (before geometric abstraction) are featured, along with sculptures and constructions by Roy De Forest and Manuel Neri, and perhaps most pointedly a Berman Verifax collage from the series that uncannily predicts the universe-in-your-phone of digital culture.

The works here are from early in the careers of these still youthful and rebellious artists, not just the gallery’s. So it’s fascinating to see how the long careers of some would evolve aesthetically, some vastly over the years (DeFeo, De Forest, Hedrick, Morris, Moses, Neri). Conversely, for those artists who died relatively young (Altoon, Berman, Brown), we are left to wonder what might have been.

Moses’ “Rafe Bone” (1958) is pure abstract expressionism, with a cluster of brushstokes, brightly colored and subdued, creating a faux-sculptural tangle of filaments in space. It’s a far cry from his later bold geometric work, but not his gestural abstractions, which magnify the drama of this early work, immersing us within the painterly action. Two shaped-canvas oil paintings by Hedrick, the hexagonal “Heroic Image” (1959 and reworked in 1990) and the tondo “Love Feel” (1957), make use of non-rectangular formats, but in the service of poetic subjectivity, not Greenbergian formalist exploration. De Forest’s “Concerning White Elephants” (1960) is a hybrid of found-object assemblage in the Rauschenberg/Nevelson vein and AbEx painting, with the paint stirrer and rasp rather delicately decorated with the dots that would come to proliferate in his whimsical figurative works later. Neri’s “Collage Painting No.1” (1958-9) contrasts collaged strips of canvas with painted unifying brushstrokes; he would later employ the principle of stylistic conflict in his painted plaster and marble figures. Brown’s “Untitled (Woman Washing Floor)” (1958) came as she was transitioning from her early, heavily impastoed abstractions to the flat, bright-colored personal narratives that became her trademark style. The dark palette and the focus on manual labor tie this work to the socially progressive painters of the Depression. Attuned to ideals of social justice rather than the postwar advent of apolitical Abstract Expressionism, it makes you think about today’s embrace by so many artists of social practice. The more things change. . .