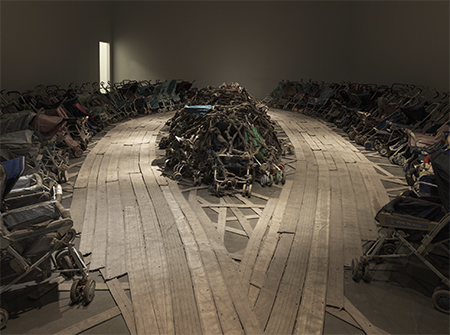 Throughout a career spanning more than 25 years, Nari Ward has created powerful and poignant sculptures addressing politically charged subjects ranging from poverty, political disenfranchisement and racism, to slavery, displacement and immigration. Although the Jamaican-born artist has previously presented installations in Houston, “We the People” is his first major museum exhibition in Texas. The original retrospective, which was organized by the New Museum earlier this year, included more than 30 pieces; here it is pared down closer to a dozen. The namesake title, “We The People” (2011), is spelled out with some 3,500 shoelaces puncturing a 27-foot-long wall, and references far more than the Preamble to the U.S. Constitution. Ward has said that all his work starts with the body and continues as a way to articulate relationships among people. In the language of shoelaces he conveys the active nature of our relationship to the founding document.

Ward’s sculptures incorporate various materials and objects that he has encountered, collected and transformed. “Amazing Grace,” first shown in 1993 at an abandoned firehouse in Harlem that would become his studio, utilizes hundreds of abandoned baby strollers. Encountering this installation in a darkened corner of the gallery to the sounds of Mahalia Jackson singing “Amazing Grace” is a deeply moving experience. Ward says that many of the strollers had been appropriated by the homeless, who used them to collect bottles and cans before abandoning them.

“Iron Heavens” (1995) is a collection of metal oven pans mounted on the wall reference the night sky, and sterilized bits of cotton nailed to fire-scorched baseball bats that denote the healing of wounds. “Naturalization Drawing Table” (2004) is a participatory work that evokes the intimidating process of applying for citizenship. It was created from Plexiglas windows that shield gas station attendants and convenience-store employees from would-be thieves. It is only fully activated when a notary public is present to help visitors complete actual immigration forms. Ward immigrated from Jamaica to Brooklyn at age 12, so “Naturalization” is both personal and reflective of the empathy felt for the displaced. If it was timely 15 years ago, the emotional and moral intensity has only grown.

A number of sculptures reference slavery and the Underground Railroad. “Breathing Circles” was inspired by the patterns of holes he saw in the floor of the First African Baptist Church in Savannah, Ga. Slaves traveling north along the Underground Railroad would hide under the floorboards during day and breathe through the holes. Another piece, “Ground (in Progress),” is made from 700 masonry bricks covered with copper and designed to reference slave-era quilt patterns that contained covert directions to the Underground Railroad. Ward begins his creative process with familiar objects and transforms them, imbuing mystery and meaning to narrative sculptures that seek to define relationships and comment on an ever-changing socio-political environment. Their lasting power is evident.