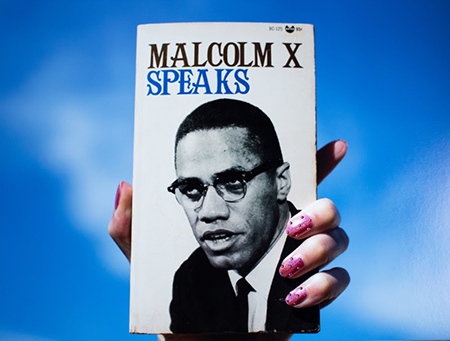 Tear gas. Shouts. Signs held high with the slogans and faces of personas holding the promise of change. The organized labor strike — a powerful, radical collaborative gesture — evolved from its origins in the 1800s train worker protests to become an enduring and potent political tool. The causes range wildly, from Greta Thunberg’s climate action teenagers skipping school on Fridays, to the masked millennials in Hong Kong, to almost 50,000 of General Motor’s automobile laborers stopping factory production cold by refusing to work.

“Solidarity, Struggle, Victory” shines a new light, in the form of contemporary works, on this collective, political gesture through artworks inspired by the huge student strike at San Francisco State University in the late 1960s. Lasting for five months, all classes ceased, the campus erupted in violence and arrests, and faculty were even fired. It was the longest college strike in U.S. history. But it also led to the first ever Ethnic Studies Department in the country.

“It was an epicenter for a lot of activism, a lot of organizing, a lot of culture, a lot of hippies, a lot of dope, a lot of poetry,” recalled San Francisco State University faculty member Jason Ferreira. In capturing that essence, curator PJ Gubatina Policarpio has deftly assembled artworks by seven artists that translate the strategies and spirit of the students’ passion in ways both clever and compelling.

In the main gallery, one first encounters Jerome Reyes’ gorgeous, dream-like drawing of the San Francisco State University quad. It’s deserted, with no signs of life save for a tiny computer screen that glows blue through the window of a nearby classroom. Decades ago, every day for five months between noon and 3pm, striking students would convene like clockwork at this site for a rally, then march en masse to the Administration building to confront the college leadership with their requests. Rendered in faint washes of ochres and blue and drawn with what looks like ballpoint pen on vellum, Reyes evokes a long-faded architectural blueprint of the square, a beautiful, apt metaphor of the strategic epicenter where it all began. One can almost detect the ghostly figures of the students uniting around the large star at the quad’s center, plotting their next move.

At the far end of the gallery, the exhibition showcases an essential, classic protest medium, the screen-printed poster.  A wary-looking Angela Davis peers out from one. In another, a young woman, arm upraised, beckons the audience towards “Solidarity with Standing Rock.” Rendered in vivid, saturated tones, these compositions by artist Dignidad Rebelde provide startling reminders of the power of a single persona, a single gesture, and even a single quote.

Patrick Martinez’s striking neon signs that hijack the medium of commercial advertising to instead blare bright slogans such as “NO STRUGGLE, NO PROGRESS” and “FREEDOM CANNOT WAIT.” These offer a nice counterpart to Dylan Miner’s homegrown minimalist approach, large fabric banners suspended from the ceiling, hand-quilted with simple but politically charged words and phrases such as “INDIGENOUS” and “MEET YOU HERE.”

The artwork that best manifests the power and endurance of collective action, however, is Sadie Barnette’s “Untitled (Malcolm X Speaks).” A crisp photograph portrays slender, female fingers grasping the 1966 paperback “Malcolm X Speaks” against the backdrop of a clear blue sky. Shiny pink rhinestone-studded fingernails, however, belie the youthful fashion of the 21st Century. Malcolm X is still speaking, and in the present tense. The image is a playful but sobering reminder that the need for inclusion, diversity and racial and social equality — valiantly fought for by the SFSU students decades ago — remains a critical cause.

By the end of five long months, the student strikers and the administration had negotiated an agreement to establish a college of ethnic studies and to open up admissions to encourage a more diverse student body. This October, the San Francisco State University Ethnic Studies Program celebrates its 50th anniversary. And since that strike, a multitude of Ethnic Studies programs have proliferated throughout the country.

Contemplating the exhibition in its entirety, I was struck by the poignancy of how it reflected the power of stubborn hope in the face of uncertainty. We’ve long witnessed the impact of distilling a movement into a single concept or visual gesture, from the Constructivist graphics of the Russian Revolution to Shepherd Fairey’s Obama poster. It’s a critical skill that artists are particularly suited for.  We don’t know how the protests of our current times will pan out. But we do know that for anything to happen, history teaches us that within the potent tools of creativity, expression and action lie the bright possibilities of catalyzing change.