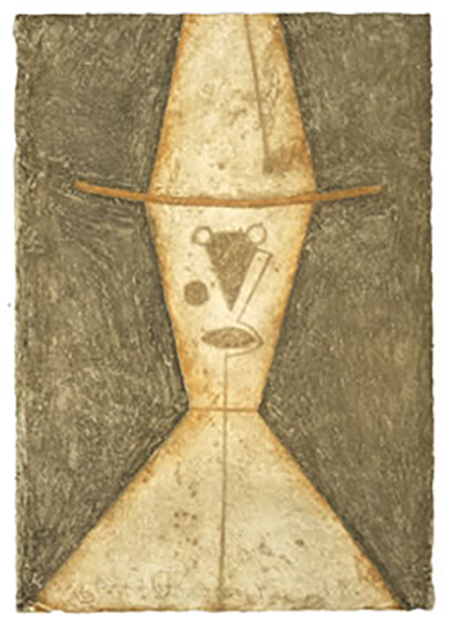 “Art is a means of expression that must be understood by everybody, everywhere. It grows out of the earth, the textures of our lives, and our experience. Do not set out to make Mexican art, or American, Chinese or Russian art. Think in terms of universality” – Rufino Tamayo

Great artists, in their work, are nothing if not brutally honest. So, it’s not surprising that this quote from Rufino Tamayo serves as a dependable, compact scaffold on which we can construct our own thinking and emotional responses to this exhibition of (mostly) Mixografia prints by one of the twentieth century’s Modernist masters. Tamayo (born in Oaxaca, Mexico in 1899) embraced an organic and universal aesthetic that separated himself from his Mexican muralist peers, Diego Rivera, Jose Clemente Orozco and David Alfaro Siqueiros. Modernist legends themselves, these three artists addressed social and political themes more directly in their work than did Tamayo in his.

The term Mixografia names both the three-dimensional printing process and the works of art it produces. Tamayo and Luis Remba developed the technique together in Mexico City in 1973. In 1984, Remba moved his family to Los Angeles, where the Mixografia gallery and workshop continues its lengthy history of producing Mixografias for well-known 20th and 21st century artists, including John Baldessari, Ed Ruscha, Analia Saban and many more.

Tamayo’s initial request or requirement of Remba in Mexico City was that the Mixografias they set out to create had to display the same richness of surface textures, details and depths, as well as the saturated color tonalities that the artist strived to produce in his oil paintings.  The overwhelming success of their project blooms joyfully in the nearly 50 Mixografias displayed here. The show also contains a few non-Mixografia lithographs, black and white film footage of Tamayo at work on the prints, and the large lithographic stone used to produce the spectacular “Dos personajes atacados por perros (Two Personages Attacked by Dogs).” Made in 1983, this work represented the largest print ever produced up to that time.

In the playful “El Perro Mueve La Cola (The Dogs Wags Its Tail)”, the mythic (and slightly terrifying) “Quetzalcoatl,” and the Salvador Dali-like “Reloj Sin Tiempo (Clock Without Time),” we can feel our eyes and being sink luxuriously into the receptive surfaces of the works’ Arches or handmade paper. Rich with the textured surface articulations that Tamayo demanded, all of these works radiate with the artist’s signature hybrid imagery drawn from his pre-Colombian ancestry and modern European forbears and influences.

With a confluence of humor, curiosity, metaphysics and valor, the figures and objects in each print rise to their surfaces with the kind of understated confidence and sturdy vulnerability that has made Tamayo’s work so readily recognizable. Collagraphy and embossing represent two other “3-D” fine art printing processes, though according to Mixografia Director Shaye Remba, “while they can produce depth, they cannot at the same time create subtle or finely pronounced surface details and textures, whereas Mixografias can and does offer both.” The process makes the printmakers who work the artist into de facto creative collaborators, as the exhibition’s wall text explains. The works are well-spaced with illuminating wall text throughout. Long, translucent screens scroll drown from the ceilings to separate the museum’s large galleries into smaller, more intimate viewing quarters. The curators further articulate these spaces by labeling and segregating Tamayo’s work into thematic categories, including “Race,” “Time and Space,” “Metamorphosis,” and “Dimensionality and Texture.”