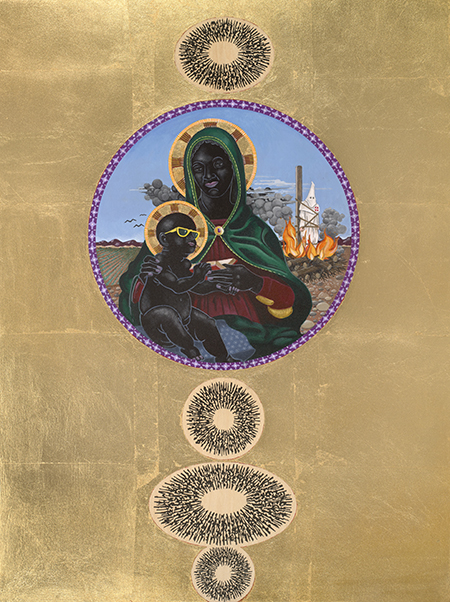 Although Mark Steven Greenfield and Mark Dean Veca are best known as figurative artists, curator Betty Ann Brown observes that both are also abstract mark makers. To illustrate her point, Brown assembled this first rate collection of works by the two artists from the past decade, allowing us to compare and contrast their approaches to mark making as a vehicle for reinterpreting historical or media imagery. Additionally, each artist created a new site-specific wall drawing.

As an extension of his ongoing meditation practice, Greenfield incorporates automatic drawings of calligraphic patterns into his compositions with the goal of diffusing his sensitive subject matter, racial stereotyping. Calling the allover patterns “mental maps,” he views them as representing the subconscious, with white energy bursts within them considered quiet mantras, states of solitude that tone down his jarring imagery. Such references to cosmic space are subtle reminders that present day challenges may seem less threatening when viewed within the context of the expansiveness of the space-time continuum.

The latter concept is particularly evident in Greenfield’s portraits of historic African American entertainers who were forced to wear blackface so as to conform to a black stereotype favored by the white audience. With their faces made entirely of black calligraphic marks, the white of the paper within and around them can be interpreted as the collective unconscious, the matrix of interconnectivity. In a series of small paintings that invert the historical roles of whites and blacks, mark making plays a supporting yet no less significant role. Centered in each work is a depiction of an Old Master Madonna and Child tondo where the principals are black rather than Caucasian. Historical reversal also occurs in scenes behind the figures, among them a Confederate house set aflame and a Klansman burning at the stake. To counter the depicted violence in each work, Greenfield painted sumptuous gold leaf backgrounds with centered vertical arrangements of his characteristic mantra emblems.

In large-scale paintings of advertising icons Tony the Tiger and Charlie Tuna, Veca employs symbolic color and details. Tony appears against a background painted in an acerbic yellow that symbolizes the overabundance of sugar and corn syrup consumed by the kids who regularly eat Kellogg’s Frosted Flakes. The background for Charlie is a hot vermillion, representing the high mercury levels in tuna. In both works, Veca depicts the mascot’s innards as made up of wormlike creatures, suggesting that the Tony and Charlie animated characters have themselves suffered the health detriments of the products they champion. A separate series can be enjoyed for pure optical pleasure. Three paintings of R. Crumb’s “Mr. Natural” set in motion like spinning discs are trippy depictions that wonderfully personify the spirit of Zap Comix.