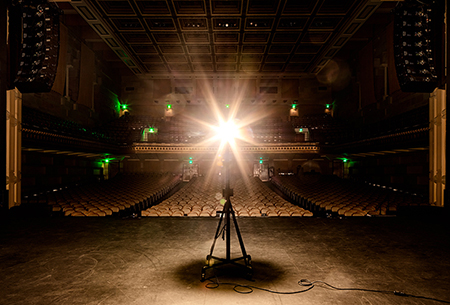 How will the current pandemic affect the arts in the future? This question was posed to Douglas McCulloh, Senior Curator, California Museum of Photography, UC Riverside. He responded that the pandemic presents a portal to the future, that there is another world emerging from this one, and that the future is already here. He added that plagues bring about dynamic societal and cultural changes, just as the Black Plague of the Middle Ages preceded and foretold the advent of the Renaissance.

McCulloh discussed the growing display of art online, of virtual viewing of exhibitions on websites, videos, Zoom and Facebook. But he acknowledged that these virtual shows will never replicate the experience of seeing art in person. The curator also talked about his previous show, mounted early last year. “Facing Fire: Art, Wildfire, and the End of Nature in the New West” was closed to the public soon after it opened, due to the lockdown.

“Museums are meant to be experienced, the exhibitions to be seen,” he said. “We have just had a remarkable moment with museums mostly closed for a year. So, what to do? Create an exhibition that operates in the online world. Not a pale imitation of a gallery experience, but an entirely digital exhibition, imagined, curated and shown online. Covid-19 has swept the globe and it makes sense that an art exhibition should follow the same global trajectory.”

He resolved to create a show based on this model and to call it “Art in the Plague Year.” The title and theme are inspired by the book, “A Journal of the Plague Year,” about the great Bubonic Plague in London, published in 1722 by Daniel Defoe, best known for the novel “Robinson Crusoe.” "Art in the Plague Year,” opened in January and received about 20,000 visits in its first week, more eyeballs than the UCR ARTS California Museum of Photography had for all of its other shows over the previous six months.

“This exhibition is built on a viral model,” McCulloh said. “It comes from everywhere and spreads anywhere. Theorist David Levi Strauss wrote, ‘Photographic images used to be about the trace. Digital images are about the flow.’ Pandemics are seeds of new and unknown futures,” he continued. “We therefore need more than art of isolation, confinement, tragedy, tedium, views from the window, colored curves of disease and death. We need art that surveys, even tries to define the territory beyond the hills of this virus. Artists as keen observers and virtuosic dreamers help humankind navigate into the unknown.”

To create “Art in the Plague Year,” McCulloh was joined by two other curators, Nikolay Maslov, Curator of Film & Media Projects, and Rita Sobreiro Souther, Exhibitions Manager, both at UC Riverside. The curatorial team reached out to 664 artists from all over the world, asking for submissions in photography, video, drawing, painting, sculpture, audio pieces, performance, multi-media art, text art and zines. They received thousands of artworks, and then proceeded, mostly through Zoom, to cull them down to 273 pieces by 55 artists from 12 countries, including Australia, Canada, France, Mexico, the Netherlands, Portugal, the UK and the United States. “We did a lot of arguing on Zoom,” McCulloh said. But the team did their work well, producing an insightful exhibition divided into eight categories: Body, Nature, Absence, Presence, Ritual, Encounters, Dystopia and Justice.

Mikael Owunna‘s “Infinite Essence” in the “Body” category features nude African American models that he painted with fluorescent paint, then photographed in the dark with a strobe transmitting ultraviolet light. The results are transcendent photos with 3-D sculptural aspects, particularly when shown on the web.

John Divola, known for seeking run-down environments for photos, contributed two images in the “Nature” category, both shot at the abandoned George Air Force Base in California’s high desert. For these, he hung blurred photos of 19th century landscape paintings, including Caspar David Friedrich’s “Wanderer above the Sea of Fog” on base walls. The resulting photos contrast sublime scenes from memories with our pandemic-induced malaise.

Wayne Swanson’s “Personal Inventory” photos appear in the “Ritual” category. They humorously document the type of objects that many of us collect, and perhaps discard when they seem to own us. One photo includes a collection of remotes. Another is of books, many of them old paperbacks, stacked to the ceiling. A third contains a variety of ephemera, including a classic old iMac and an empty box of Wheaties.

Sara Jane Boyers created “The Ghostlight Theatre Project” for the “Absence” category. She visited several vacant SoCal theaters and shot images from the stages looking out at empty seats, with each stage illuminated by a single lightbulb. While emptiness is evident, the artist also draws attention to the potential for change and transformation of the stage itself as we emerge from this pandemic.

“In the midst of every crisis lies great opportunity,” said Albert Einstein. McCulloh, along with his two curators, has employed this dictum with skill and artistry, resulting in an inspiring exhibition that portends a better world now and in the future.