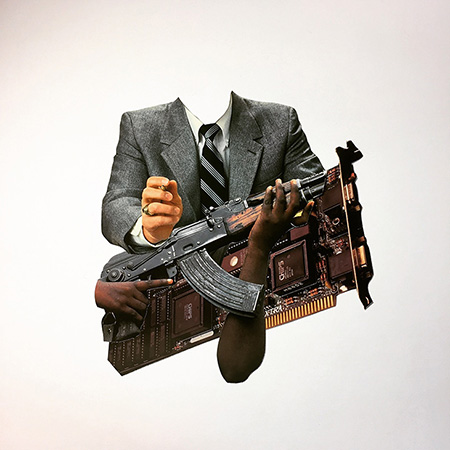 Honoring the 90th anniversary of Seattle artist Selma Waldman’s birth, “A Conversation through Time & Space” recently paired five examples of her art made between 1969 and 2006 with single works by ten members of Center On Contemporary Art. Each artist responded to Waldman’s legacy at the invitation of in-house curator Natasha Thornton. The results are uncanny echoes of and reverberations with the older artist, who became well known for her activist art on topics as wide-ranging as the Holocaust, South Africa, famine, and police violence. Waldman’s reputation during her lifetime was bigger in Europe than in the U.S., in part due to her radical subject matter, and in part due to her time spent in Berlin as an early postwar Fulbright Fellow. While there she researched and made art about the Holocaust, which was played down in West Germany during the years immediately after the War.

Since Waldman’s death in 2008, however, interest has grown, with three retrospective surveys of varying sizes and scope. Her vast oeuvre is managed by her son, Rainer Waldman Adkins at the Selma Waldman Legacy Project in Seattle. Originally educated at University of Texas, Waldman’s 1959-61 stay in Europe exposed her to the mechanisms of historical amnesia and how unresolved conflicts such as the Palestinian issue, apartheid and police violence against peaceful protesters here at home could become the fodder for an art of concerned engagement. Her agitated flurries of marks mimic the brash thrusts of batons and chains, channeling Käthe Kollwitz among others. Unlike Leon Golub (to whom she was often compared unfavorably), Waldman rejected the male monumentality of the New York School canvas size and concentrated on an intimate scale that uses slips of paper to force us to witness the horror within a cell or on a street corner, as in images of water-boarding from her “Black Book of Aggressors” (2005-2006) that are on view here. Her most celebrated series, “Falling Man” (1966), repurposed photographs of piles of corpses in the Warsaw Ghetto into upside-down free-falls of ravaged bodies of dizzying grace.

The ten CoCA members not only display work related to Waldman’s legacy; some of their comments are among the most insightful that have been written about her. For example, Yvonne Kunz notes, “A vein of loneliness pervades both Waldman’s and my own work ... We humans are alone in this together: in our longing for peace, our longing for understanding, our longing for justice ... Unlike Waldman … I do not dive fearlessly into the overt acts of violence but, instead, I address the minutiae of micro-aggressions which can add up over a lifetime.”

Jennifer Molina’s photographs of women protesting murders of students and daughters share Waldman’s “collaboration with our subjects and surroundings.” She shares Waldman’s sourcing of photography to “explore interpersonal relationships, the human condition, and the effect of our actions on the surrounding human landscape.” Molina relates to how Waldman’s activism “manifested itself in her Jewish identity” as a parallel to “my Mexican-American identity ... [Like Waldman, my art] is an outlet for my ideas, my energy, my creativity and even my frustrations.”

Anchorage, Alaska artist Mikhail Isikoff cuts and collages news and color supplement magazines such as “Time” and “National Geographic.” “Foreign Investment” is a mélange of corporate businessmen, machine guns, and starving children. Isikoff’s focus is on the perpetrators, the instigators of political violence, as he notes of Waldman, “[Her] artistic responses to the ‘Pornography of Power’ are fueled by dark points in history ... but who enabled them?” He also questions and transcribes into art the plight of Alaska communities “suffering as a result of political strife, ecological disasters, pollution, and famine, but by whose hand?”

I’m not clear as to why Vian Nguyen’s and Amanda Triplett’s abstract paintings and yarn sculpture appear here, they feel out of place. But “Labor” by Avril Lum is a startling take on Asian nail salons, what she calls “implicit and unspoken violence” against women. Similarly, Rohena Alam Khan raises questions of Arab women’s rights in her painting “Never Stop Questioning,” a daring reveal of a woman’s face behind an all-enveloping veil and head covering. The woman’s eyes pierce our curiosity, her garment drenched in paint — or blood.

On a quasi-optimistic note, Kunz’s “Natural Resources #3” juxtaposes a naked woman about to be tortured with young woman in helmet toting a machine gun, who we want to feel will be her rescuer. The mixed-media drawing is covered in a thin pink film of watercolor, ornamented by floating electric torture prods. Reflecting on her own awareness of political torture while traveling in Thailand, Qatar, India and China, Kunz concludes this tribute to the leading political artist of the Pacific Northwest: “. . . just like Selma, I want to keep fearlessly creating and being a voice for people fighting for liberation of all kinds.”