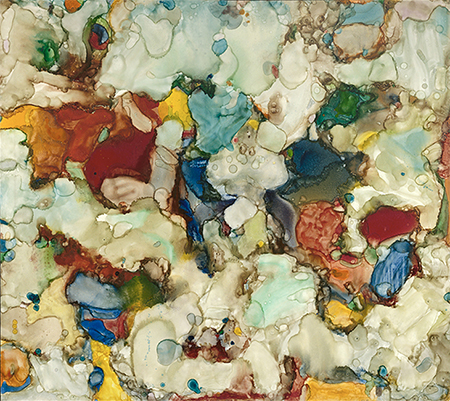 When asked my definition of “What is great art?” I always respond that it is art that people want to keep looking at — and talking about. It looks like Alden Mason (1919-2013) will be looked at and talked about for a long time. Besides the Bellevue Arts Museum survey, Seattle galleries Foster/White, Greg Kucera and Woodside/Braseth also organized commemorative exhibitions this summer. There is the enormous volume of work that he produced over the 93 years of his life — watercolors, oils, acrylics, murals, prints and, above all, drawings. Mason retired at 62 from the University of Washington School of Art to continue painting full-time and actually snagged a few shows in New York without having to move there. He became a minor footnote in the history of Color Field painting, for his “Burpee Garden” series (1972-76), as duly noted by artsmagazine and the New York Times. Next, his canny career-building encompassed huge, satisfying successes with laughable catastrophes, like his thinking Allan Stone, his New York dealer, was dead and calling the gallery to ask for another show (Stone answered the phone).

And that was only professionally; his personal life is glossed over in “Alden Mason: Paintings” by biographer Roger Hull. To be fair, what Hull quotes other apologists referring to as Mason’s “wandering eye,” might require sterner slang today, such as “serial adulterer” or “groomer,” and adding one interracial relationship with Debra Hunter, a woman whom he used to open doors to indigenous cultures. These visits changed Mason from a backwoods landscape artist to a manic expressionist radiating jagged, swooping brushstrokes into rhythmic, pulsing compositions.

From the darkened, El Greco-ish village scenes of his Skagit Valley childhood to the Pop art hard-edge phallic still lifes of the 1960s and on, Mason reflected his times. His range included flashy styles that acted as veils for darker subjects covered over by the unstoppable joy acclaimed as his subject. Despite Hull’s dogged efforts and impressive chronological research, two art critics, Regina Hackett and Robert Ayers, present respectively the worst and best essays ever written about Mason. Hackett’s is the worst because it substitutes affection for analysis. Ayers’ is best because, never having written about Mason before, he brings revealing insights heretofore overlooked by critics. Weighing in at 225 pages, the hardbound tome is occasioned by a concurrent retrospective at the Bellevue Museum, “Alden Mason: Fly Your Own Thing.” With no river stone unturned, Hackett and Ayers carve up Mason’s oeuvre into modernist-swinger and heavy-thinker segments, mostly informative, occasionally obtuse and arch, and ultimately persuasive as to the artist’s importance beyond his childhood precincts of muskrat trapping in the Skagit. He attracted midcentury-modern architectural patronage (four separate residential commissions); was a tenured UW School of Art professor; and, as seen in this suite of exhibitions, was an ambitious artist willing to do almost anything to further recognition of an aesthetic sensibility that at times appeared to go against the grain of Pacific Northwest art. In the case of his post-"Burpee Garden” paintings, he ran up against the fickle New York art world.

Hackett focuses on the “Burpee Garden” paintings, the same group treated in her 1987 Henry Art Gallery catalogue essay, but here fleshes out a more deluxe pedigree that takes on Arshile Gorky, Pierre Bonnard, Philip Guston, John Altoon, California funk and the Chicago Hairy Who for good measure. With access to family papers and Mason’s son, Roger, Hackett’s approach is more monument than analysis or interpretive key. However, although the Color Field paintings are discussed in depth by Hackett, it is Ayers who has new things to say about them. More importantly, he makes the case for the greater significance of the later works.

Mason’s rifling through world ethnic art is much more fruitful as a key to his art, but, seen today, also potentially problematic in terms of post-colonial cultural expropriations. Unapologetic in his sourcing and collecting, Mason used indigenous art and his real-life experiences with tribal peoples in New Guinea, Central America and Africa as creative motivators in his increasingly dynamic painting surfaces. Highly abstracted, mask-like visages drive these connections.

Then there are the largely ignored imagery of sex and violence against women. When we read his entire oeuvre as autobiographical, the recurring bird is not Ayers’s “spirit,” but Mason’s symbolic stand-in; similarly, the reclining nude woman hovering beneath a huge black bird (“Gypsy Rose and the Bird,” 1992) is awaiting assault far from the bland sterility of UW colleague Michael Spafford’s “Leda and the Swan” (another Hackett idol). The intimidating husband-and-wife couple in “The Farmer’s Wife” (1997) is his mother and stepfather, Hattie and Nestor, or Arvid, his biological father, who died when Mason was five. Wounded as a Morris Graves bird, Mason turned to women (after Mother) for solace and to assuage grief. This led to a lifelong chain of female imagery alternating between grateful affection and maternal intimidation. What appeared as derivative debts to Altoon in the 1960s and 1970s were debuts of Mason’s darker, more interesting side. “The Proboscis Enigma” (1970); “Mashed Head” (1971); “Fetish Mask” (1972); and “Montezuma” (1985) trace ominous violence, slaughters, and bloody outcomes with the chromatic panache of Raoul Dufy, hence their confused reception.

Mason preferred open-ended meanings and interpretations and repeatedly said so. He did not wish to close off discomforting content and areas of emotion, especially anger and despair. Foretelling Judy Chicago, “Parade” (1966) is blatant in its severed and separated phallus and scrotum, plunging into a centered red oval. Sealed off in black lines and model car enamels, Mason’s secret desire cannot be hidden forever: too many people want to keep looking at and talking about it, his art, his legacy, and his gift to American art.