Kara Walker, an initiative of “Toward Common Cause”
DuSable Museum of African American History, Chicago, Illinois
Review by Margaret Hawkins 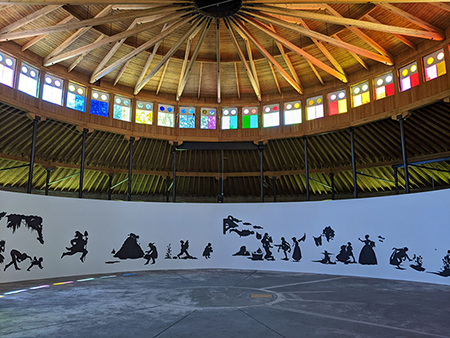 Kara Walker, “Presenting Negro Scenes Drawn Upon My Passage through the South and Reconfigured for the Benefit of Enlightened Audiences Wherever Such May Be Found, By Myself, Missus K.E.B. Walker, Colored,” installation view at the DuSable Mus

Kara Walker’s silhouettes are not for the faint of heart, though on the surface they look almost pretty. But get up close and they slam you with obscenity: slavery. Consider the reinstallation of her classic early work, “Presenting Negro Scenes Drawn Upon My Passage through the South and Reconfigured for the Benefit of Enlightened Audiences Wherever Such May be Found, By Myself, Missus K.E.B. Walker, Colored.”

First exhibited in a conventional gallery space at the Renaissance Society at the University of Chicago in 1997, the work looks even better now installed as a 360-degree panorama, centered in the rotunda of the Roundhouse at the DuSable Museum of African American History. The series of loosely related vignettes, fashioned from black paper silhouettes, is part of a city-wide, 18-venue exhibition, “Toward Common Cause: Art, Social Change, and the MacArthur Fellows Program at 40.”Walker, who is Black, is one of 29 participating Fellows.

Walker’s silhouettes rely on a whiplash effect, even when we know what to expect. They draw you in with their refinement, then swamp you with raw force. The raw part is her subject matter. This is not a historical treatise on slavery, not photos or text or “realism.” Walker skips all that and deep-plunges into the truer truth of imagination and cultural memory, forcing us to enter the inner lives of slaves, who by the way are not portrayed as virtuous victims but as complex human beings capable of their own perversity. Walker offers up sexual exploitation, bestiality, casual cruelty, bodily effluvia, surprising forms of violence and debasement.

Some vignettes are just gross. You want to look away, but you can’t; the circular format embraces you clammily. The silhouettes only tell so much, demanding that you keep looking, to figure out what’s going on. And besides, a part of you wants to look because the awfulness needs to be known. This is what humans devolve into if given the chance, Walker is saying. To underscore this point, she features a tall pile of human excrement, along with a Black man hurrying toward it with a shovel. This functions as both metaphor and fact. Also, there’s sex with a horse. It is unsurprising to learn that one of Walker’s favorite artists is Brueghel.

Also (gorgeously) raw is the venue. In a perfect pairing of artist to exhibition space, the work is installed in a refurbished horse stable — surely the scatological associations pleased Walker — formerly owned by the Chicago Park District and designed by famous Chicago city planner and architect Daniel Burnham. The 35,000-square-foot rotunda is all exposed limestone, pine timbers and concrete floors. In an added synchronicity, the space quotes cyclorama, those weird post-Civil War panoramas in-the-round that flourished briefly in the late 1800s and celebrated Civil War battles, a form that Walker cites as inspiration. To repurpose this format in this space for this work is pure genius.

To top it off, literally, clerestory windows circle the timbered ceiling and let in daylight. They are covered with colored film, creating a stained-glass effect that lays rainbows on the concrete floor. Wow. It’s like an extremely profane church.

That’s the raw part. The refinement part, it might go without saying but I can’t say it enough, is Walker’s touch, specifically her drawing. She’s an exquisite draftsperson. Without that, these images would be simply grotesque caricatures. Instead, every curve and detail is loaded with observation, opinion, and sometimes parody about character, intention, desire, fantasy, history, gender politics. She vivisects human nature with the same surgical precision she uses to razor her black paper cut-outs.

So much is going on here and most is hidden, subsumed in the opaque blackness of silhouette. The opacity of the medium suits Walker’s ugly and complicated subjects. She saturates us in horror but doesn’t explain and doesn’t shy away from perverse pleasure either. Unequal power leads to perversity and abuse, this work argues. Everybody is degraded. It has been said of Walker that she refuses to veil the history of slavery in shame. This is true. Her imagery has been called bizarre, but that is not true. To me, it feels uncomfortably recognizable, the way nightmares always seem familiar.

Maybe the most telling vignette in this psychological freak show is the dancing couple. Walker makes ruthless fun of the so-called romance of the American south, the dainty white ladies with their upswept coifs and big skirts, the “gentlemen” with their good manners and tight pants that reveal their intentions for the slave girls. She laughs at the idea of romance in this context, maybe any context. The couple only looks romantic. He’s a white man in a priggish pose and fancy clothes; she’s graceful, young and Black, with a beautiful body and a pretty dress but no shoes. This is not an equal relationship. While they dance their mincing dance, a strange thing emerges from her skirt, the profile of a rodent or fox. A wild animal lives in her skirt. Is it a parasite or a pet, an effort at self-protection, or her alter ego? Is she part wild animal? Does he see it? Maybe that’s what he likes about her.

A child approached me while I was taking in the penultimate scene, a girl copulating with a horse. The child stood next to me studying the image, then patted the wall and softly asked, “What’s she doing?” Luckily, I hadn’t figured it out yet. She offered the possibility that the girl was cooking the horse, referring I guess to the horse’s upside-down position, as if stuffed in a pot. Later I thought, that’s another great thing about Walker: she leverages the ambiguity of silhouettes to automatically match the viewer’s mind, knowing they will land where they need to. That flat blackness is a kind of Rorschach test. You see what you are inclined to see. A lot can happen in the dark, and the action goes as far as your mind will let it.

In the last vignette, a young Black woman makes her way toward the exit, wearing the smoothly coiffed head of a white woman on top of her own head. It could be a disguise to help her make her way in a hostile world. It could be an impersonation, a psychological disguise. Then again, maybe it’s a decapitation, with the severed head worn as a trophy. After all, fair is fair. It’s fitting that this is where the piece ends.

Postscript: “Presenting Negro Scenes Drawn Upon My Passage through the South and Reconfigured for the Benefit of Enlightened Audiences Wherever Such May be Found, By Myself, Missus K.E.B. Walker, Colored” is one of eighteen shows in Toward Common Cause: Art, Social Change and the MacArthur Fellows Program at 40. The biennial-style, multi-site exhibition features 29 MacArthur visual art Fellows and will remain on view in and around Chicago, on a staggered schedule, through December. More information is available here https://towardcommoncause.org.

Correction: A previous version of this story implied that Kara Walker was responsible for the colored light coming through the upper windows. It is instead the result of a previously existing site-specific installation of film gels on the rotunda windows by Cauleen Smith, titled “The Right Time, Before and After.” The window work is a 2017 commission by the Palais de Tokyo that’s now a permanent part of the Roundhouse.