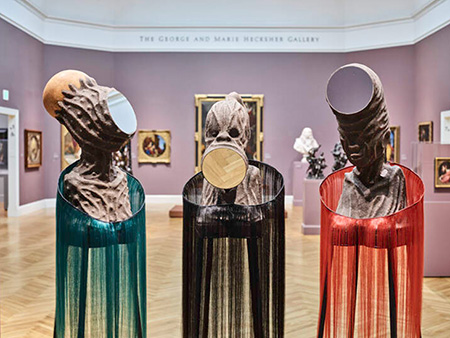 Fred Wilson's “Mining the Museum” at the Maryland Historical Society in 1992 was one of the first installations by a contemporary artist to examine a museum’s collection to expose prejudices, as well as issues of violence, racism and exclusion in their holdings. Since then, numerous artists have created and placed works in direct response to a museum, frequently inspiring conversations about display, what is collected, what is missing, what is on view and why. In “I Am Speaking, Are You Listening?” Kenyan-American artist Wangechi Mutu juxtaposes her sculptures and works on paper with statues by Auguste Rodin in the courtyard, and galleries full of early Renaissance and later European paintings. This is the sixth of an ongoing series of exhibitions conceived with contemporary artists to reflect on the history and identity of this Beaux-arts palace. A smattering of contemporary art has been introduced in the 21st century, with the Contemporary Arts Program starting in 2017. In her installation, Mutu raises questions including, "What does belonging mean? Where do people come from? Whose home is this and why? Whose institution is this and who is it serving?"

The Legion of Honor in San Francisco is an encyclopedic museum with holdings in ancient art, early European paintings, decorative arts and sculpture, as well as photography and a vast collection of works on paper. The building was constructed to commemorate California soldiers who died in World War I. The structure is imposing, and its holdings are partial to the canon of white patriarchy. Centered in the courtyard of the U-shaped museum is Rodin's monumental bronze sculpture, “The Thinker” (1904). Originally commissioned to be the centerpiece of “The Gates of Hell,” numerous casts (28) of “The Thinker” were created. Versions can now be found in museums and public spaces throughout the world.

For Mutu's installation the conversation begins in the neoclassical Court of Honor, at the entrance to the museum, around ‘The Thinker.” Under “The Thinker’s” gaze she has positioned four bronze works. Two “Shavasana” figures (the corpse pose in yoga), “Shavasana I” and “Shavasana II” (both 2019) are presented as victims, their red painted fingernails and high heels extending out from under tarps that cover them like crime scene victims. “MamaRay” and “Crocodylus” (both 2020) are animal-human hybrids posed as gatekeepers that flank the museum's entrance.

Entering the galleries, we confront the half woman half sea creature “Water Woman” (2017), perched on a large, dark orange pedestal and gracefully looking out toward the nearby bay. In the gallery space directly behind her is “Prayer,” three monumental strings of black beads draped from the vaulted ceiling, along with “Sentinel IV” (2020), a life-size female figure made from tree branches and strands of black hair. Both are seen in relation to a selection of Rodin sculptures.

It is hard not to be self-reflexive when regarding “Mirror Faced I,” “Mirror Faced II” and “Mirror Faced III (all 2020). Situated at the entrance to the European painting gallery, this mixed media triptych consists of mirror-faced female busts outfitted in gowns of red, black and green thread that hang over four-legged stands. The circular mirrors reflect different aspects of the space. You see your own face, the floor and ceiling of the gallery, and also the shapes of several tondo paintings in the gallery reflected in them. At the back of the space, the reclining, bumpy skinned female figure of “Outstretched” (2019) is positioned to echo the women in the nearby paintings. Yet Mutu's figures are not beckoning to the gods or holding children: rather, they are stoic individuals that assert power through their materiality.

A few of Mutu's works on paper hang amidst bronze and marble sculptures in another gallery. These highly intricate ink, watercolor and collage on mylar works, such as “Ox Pecked” (2018), have a fantastical fluidity and grace in contrast to the sheer weight and density of the sculptures. At the far end of the southeast wing a video produced for the occasion, “My Cave Call” (2020), closes the exhibition. Here, Mutu performs as a mythical creature in the bowels of a cave that provides grounding for much of her other work in this realm.

Without being preachy or didactic, “I Am Speaking, Are You Listening” raises questions about the West’s modes of representation throughout the centuries. It’s a dialogue about history, race and gender that shifts as you experience the installation. The sensitivity, passion and longing Mutu brings allows that dialogue to linger well beyond.