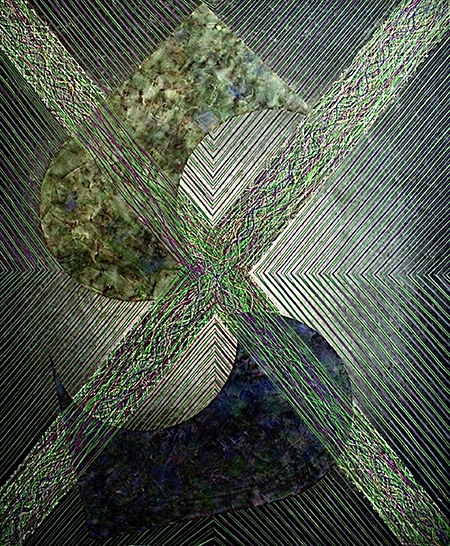 “Since March 7, 1972, my oeuvre [has been] dedicated to a spinning off of light, color, form, retinal vibration, space, and the materiality of a chosen medium and its respective immateriality.”

On March 7, 1972, HJ Bott was doodling on a pad of graph paper while in a meeting at work. He drew a square, divided it into four quadrants, and drew an “S” through it. Since that day, the resulting shapes have dominated his work. He calls it the “Displacement-of-Volume System” or the DoV module for short. In 1992, on the occasion of the 20th anniversary of the DoV System, he said, “Once I finally decided to constrict myself to working with a system-as-style, using my Displacement-of-Volume System and its inherent modules, my focus became more assured. I think.”

Bott has been an incredibly prolific artist, considering the majority of his work revolves around the DoV module. His aptitude for mathematics prompts him to keep track of the number of shows he has had, which he estimates to be close to 100 solo and 800 group. At the preview for this show, one long-time patron remarked, “I thought I had seen everything of Harvey’s, but this is all new to me.”

Seventeen works of art from 1965 to 2017 include five large paintings, seven sculptures, a 1976 etching, and an early pen-and-ink drawing. The mini retrospective is appropriately titled “HJ Bott: A Baroque Minimalist”: it is not about what the objects are reduced to, but about what they have been built up from.

Four square panels comprise the 98 by 98-inch painting “Euthenic.” On the minimalist side, the painting is formal, geometric, ordered, and unemotional. On the other hand, it is baroque in its complexity, patterning, and sophistication. Two DoV modules, which are sometimes described as paisley- or comma-shaped forms, occupy the center of a black-and-white checkerboard background. Four circles spin around the center like a pinwheel. Sheer overlays in warm colors help delineate the two modules and anchor the lower left-hand corner. The surface glistens due to Bott’s use of glazed polymers on polyflax panels.

In the 1985 sculpture “Open Heart,” Bott manipulates rose-colored industrial mesh and undulating black wire into a seductive floor piece that suggests an exotic sea creature or high-fashion headpiece. In the equally lovely painting, “Damndazzled Generalizing Specificity,” the intricacy of the geometric patterns in shades of green and purple is astounding. It may be minimalist, but it is in no way reductivist. It is dense, loaded with detail and drama. The DoV modules seem to float above a ground of pulsating electric circuits. Extravagant and flamboyant, it is the artist at his best.

The materials Bott has used in these artworks include polymers, acrylics, foil, titanium mica flakes, enamel, vinyl, aluminum, India ink, basswood and pine. He is part-artist, part-scientist, part-mathematician and part-philosopher. I first met Bott in 1981 and attended one of his remote-controlled “ROBOTT” operas. I was impressed by his theoretical concepts and political insights, as he wrote the satirical scripts and had his friends, fellow artists, critics, and even an art dealer record them for the robots to recite as they rolled around the room.

Bott has always been ahead of this time. In 1993, he said about a piece titled “Space Mun” that “It’s neither male or female because when we all are wearing spacesuits in the future because we have destroyed the planet, no one will know anyone’s gender. We will be fighting for space suits.” In 1972, he did a series of abstract drawings using masking tape and graphite that predated similar works by Frank Stella and Carl Andre. Bott’s brilliant mind and creative drive have served him well over the past half-century, as he has focused on creating philosophically charged work informed by a conceptual framework and anchored by a formulaic geometric system.