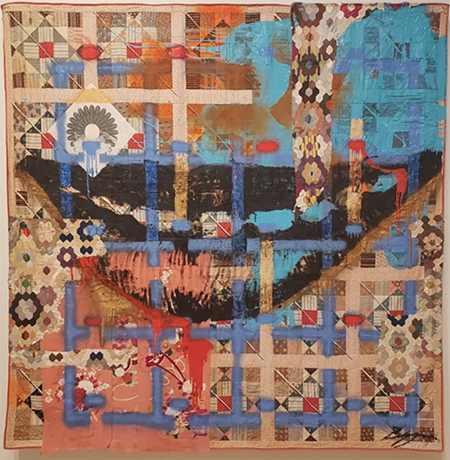 Sanford Biggers conceived of and constructed this compelling exhibition of 50 painted and embellished quilts on many levels, from the metaphorical, to the figurative; from the abstract, to the intuitive. The works are emblazoned with spray paint, acrylic, charcoal, tar, glitter, oil stick, textiles, and other media.

Entering the show, we behold an array of square and rectangular, colorful, and symbolic images. They draw inspiration from contemporary art, urban culture and sacred geometry, along with the hundreds of years history of the African American experience. Within much of the work, there are references to the Underground Railroad, the 19th century network of secret routes that slaves used to escape to freedom.

The artist’s initial impetus for this work was a 2009 commission from the Mother Bethel AME Church in Philadelphia, which was a stop on the Underground Railroad. As Biggers researched the Railroad, he became interested in the rumored legacy of quilts as signposts along the escape routes. Inspired by those stories, he created his first quilt-based work for the Philadelphia project.

As the artist continued to research the history of quilts, he was gifted with many of these antique treasures, so naturally he proceeded to paint on them. More than a decade ago, he named this new series “Codex.” The title refers to African Americans’ centuries old practice, known only to them, of code-switching or shifting from one linguistic code to another as a strategy for survival, and as a means of escape from brutal slave masters. “Codex” also suggests the “hidden in plain view” codes — through patterns, colors and folds — that former slaves embedded into quilts and then hung on signposts along Underground escape routes.

In the course of working on a quilt, Biggers adds his own characters and symbols as additional layers of codes. “It’s also about the transformation of the object, doing another process or action that acknowledges its found nature, but also puts something new into it,” he explained. The results are multi-layered abstract artworks that bridge contemporary iconography to symbols of the debilitating and conversely creative history of African Americans.

Biggers creates the quilt paintings intuitively, but references his knowledge of African American history, contemporary art, worldwide spirituality, music (he is also a musician), and even Afrofuturism, a movement combining science-fiction, history and fantasy, which also explores the African American experience and African ancestry.

The earliest pieces, “UGRR: US2.1” and “UGRR: US2.2” (both 2009), are composed of colorful screen prints on muslin with the artist’s personal markings. “Quilt 6” and “Quilt 7” (both 2012) combine original patterned quilts with drawings of globes, stars and triangles, the latter referencing sacred geometry.

“Quilt 14 (Flying Lotus)” (2012) depicts a blue lotus flower, symbolizing the Buddhist image of a beautiful flower growing out of a muddy pond. It also contains a triangle and drawings of ships, reflecting African Americans’ transformation from victims of chattel slavery to practitioners of free creativity over the centuries. Continuing this enlightened theme are “Quilt 15 (Harmonics 2)” (2012) and “7 Heavens” (2013), each with a pinwheel style yellow flower nearly filling up the quilt canvas. With these and other pieces, the titles speak to the viewer as much as the designs do. Other examples of this include “Estrellita” (2013), a composition of black stars in a circular pattern; and “Rockstar” (2013), comprised of a large striated multi-colored star filling up much of the canvas.

Quillts with figures include “Negerplastik” (2016), with an all-black silhouette, and “Floral Seated Warrior” (2017) with a stylized warrior composed of additional textiles. Several geometric three-dimensional pieces, referred to as “Quilt Objects,” are comprised of geometrically painted quilts stretched onto plywood. These include “Fool’s Puzzle” (2017) with a series of black triangles; “Harlequin” (2017) with a harlequin print; and “Incidental Geometry” (2017) with a zig-zag pattern. Many of these pieces are also adorned with gold or silver leaf.

While quilts are regarded by many people as quaint functional sources of warmth and beauty, research indicates that they have often been used as political tools, going back to the 19th century. Quilts over the last several decades have continued and even intensified this trend. Consider the enormous “AIDS Memorial Quilt” of 1985.

Biggers also mines the quilts as political tools with his “Codex” series. In an online video filmed at the museum, he remarks that after seeing an exhibition at the Whitney Museum of quilts by women of Gees Bend, Alabama, a small African American community that has produced hundreds of exceptional quilts over the centuries, “It got me to thinking a lot about the politics that are embedded in materials.” He went with that instinct and ultimately created a series of artworks using quilts already infused with politics, to which he added “a transgenerational conversation within aesthetic code,” that is, layer upon layer of politically, aesthetically, and spiritually infused codex.