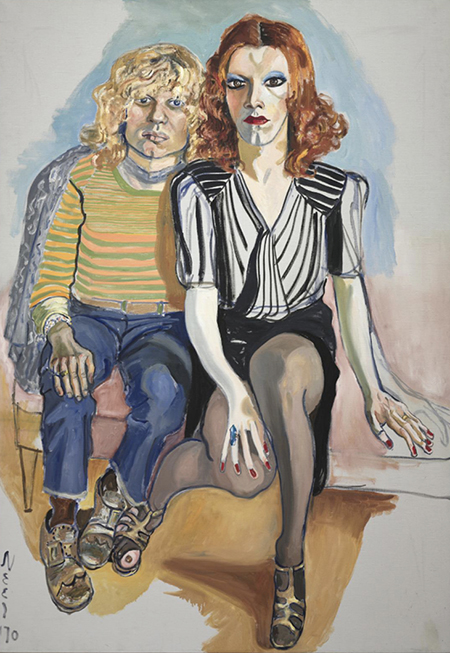 “People Come First” is the subtitle of this retrospective, and it aptly elucidates Alice Neel’s humanistic life philosophy, which she manifested in both her artistry and her relationships throughout her life. The 100 plus portraits, still lifes and landscapes executed in oil, graphite and watercolor on display here were created while Neel consorted with and supported various progressive individuals and movements in New York City. Born in 1900, she is quoted in 1950 as saying (in the Communist Party's “Daily Worker”), “For me, people come first. I have tried to assert the dignity and eternal importance of the human being.” She also remarked: “There isn’t much good portrait painting being done today, and I think it is because with all this war, commercialism and fascism, human beings have been steadily marked down in value, despised, rejected and degraded.”

As an artist committed to social justice and civil rights, for seven decades Neel embraced and painted people from the social and political movements in her hometown — Marxists, Feminists, civil rights, LGBT activists, and others. She painted pregnant women, musicians and nudes, including one of herself at age 80 (she died in 1984 at age 84), all with a sharp but compassionate eye. All the while, she was mining issues of personal interest, including periodic poverty, rejections by male partners, the loss of two children, and a nervous breakdown that resulted in stays at four clinics. Neel was also dealing with the sexism of the time; she once said, “My mother used to say to me, ‘I don’t know what you expect to do; you’re only a girl.’ But this, instead of destroying me, made me more ambitious because I’d think, you know, I’ll show them, I’ll show her.” And she was pursuing figurative painting in defiance of the tide of mid-century Abstract Expressionism.

Indeed, the act of painting portraits became Neel’s salvation from her personal travails, while providing us with a visual chronicle of New York City’s evolving progressive movements through much of the 20th century. Neel was born and raised in Pennsylvania before residing for two years in Havana, and then moved to the Big Apple in 1927.

Neel’s expressive, stylized paintings of the many people she interacted with reveal a passion and dignity that speaks with a consistent frankness through most of her career. Her brand of realism anticipated the emergence of modern feminism and social practice, thus conveying the zeitgeist of the eras they inhabited. This feature is particularly resonant in her counterculture portraits from the 1960s and 70s. Perhaps the most well-known of these is “Jackie Curtis and Ritta Redd” (1970). This double portrait features Warhol superstar Jackie Curtis (named John Holder, Jr. at birth), sporting long red hair, blue eye shadow, deep red lipstick and revealing clothing, while staring confrontationally at the viewer. Her presence overwhelms the emotionally diminutive Ritta Redd in the painting.

“People Come First” (originally presented at the Metropolitan Museum of Art in 2021) is divided into eight sections. “New York City,” 1928 to 1968, includes cityscapes, building interiors and portraits of individuals from Neel’s neighborhoods. In “Georgie Arce No. 2” (1955), a defiant pre-teen stares out at us while holding a large knife, referencing the implicit violence pervading New York City neighborhoods in the 1950s. (Think of “West Side Story.”) The more genteel “Dominican Boys on 108th Street” (1955) is a compassionate depiction of two of Neel’s neighbors.

“Counter/Culture” is the largest section in the exhibition, with paintings from the 1930s through the 70s. Here Neel depicts the bohemians, hippies, radicals, performers, artists and writers who Neel met, befriended and protested with. In addition to “Jackie Curtis and Ritta Redd,” examples include feminist poet “Adrienne Rich” (1973), an ink on paper portrait in which the smiling subject appears to be hiding a secret; and “Robert Avedis Hagopian” (1971), the popular San Francisco pianist, boldly demonstrating in his face and body the focus he exhibited while performing. Hagopian was among several of Neel’s subjects who later died from complications of HIV/AIDS.

“The Human Comedy” was a title that Neel often used. The selection of heartbreaking drawings and paintings in this section includes the macabre graphite on paper “Suicidal Ward, Philadelphia General Hospital” (1931), which alludes to the artist’s own year-long hospital stay. In this drawing several patients are pathetically confined to their beds while doctors and nurses stand over and monitor them. In “City Hospital” (1954), in ink and gouache on paper, patients, visitors and one distraught nurse desperately converge together in a small space.

“Alice Neel and Art History” aligns works by Neel alongside pieces from the Fine Arts Museums of San Francisco collections. Here we see some of the most startling artworks in this show. These include four gelatin silver prints of a nude woman in advanced pregnancy by Imogen Cunningham, photos that mirror in style and subject matter several Neel paintings. Here also is the Neel “Pregnant Maria” (1964) painting of a woman in late-stage pregnancy posing as though she might for a “Playboy” centerfold; and “Childbirth” (1939), in which a large-breasted woman contorts her face and body while delivering her baby. Also in this section, “Ginny in Blue Shirt” (1969), a pensive and perhaps expectant portrayal of Neel’s daughter-in-law, was painted during the artist’s visit to San Francisco.

The “Motherhood” section includes some of Neel’s most intimate works, with several evoking the early Renaissance Madonna and Child tradition. “The Spanish Family” (1943), depicting a dark-haired mother embracing three children, has a dark, Moorish-inspired aspect, and is different in this respect from her more cheerful mother and child paintings. But the most compelling image is “Richard and Hartley” (1950), a portrait of the artist’s two handsome preteen sons, congenially seated alongside each other. This prescient painting conveys the illustrious lives that the artist expects her sons to lead — which they in fact did.

The “Nude” section is predictably the most provocative and salacious part of the exhibition. In addition to the nude self-portrait, Neel contributes “Joe Gould,” a portrait of a seated man showing off multiple penises, and “John Perreault” (1972), also of a frontally nude man reclining on a bed that flips the long history of Venuses and Odalisques. In “Pregnant Julie and Algis” (1967), the unclothed Julie, showing off her belly, lies alongside her fully clothed husband, creating an interesting juxtaposition of exposure alongside modesty, and of the expected sexuality of women by men even during pregnancy.

The final section, “Good Abstract Qualities,” includes Neel’s partially abstract oil, “Black Draftee (James Hunter)” (1965). The story behind this piece demonstrates Neel’s compassion for her subject, and her willingness to embrace different painting styles. During the Vietnam War, she saw Hunter on the street, stopped him and asked if he would pose for her. He explained that he was about to leave for Vietnam but agreed to two sittings. The first lasted several hours. But as Hunter did not show up for the second sitting, Neel eventually decided that the painting was complete, signed it and put it into a Whitney Museum exhibition. She never heard from Hunter again nor ever find out what happened to him. But the “unfinished” painting became the genesis of a new, more minimal style for the artist, while demonstrating her ever-growing love for people from all backgrounds and races.