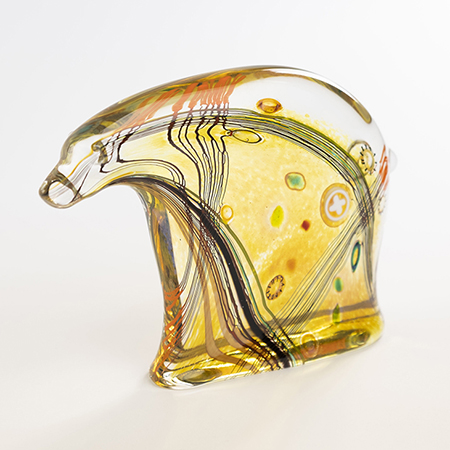 Three artists with ties to the Pilchuck Glass School in Stanwood, Washington, now celebrating its 50th anniversary, demonstrate how Italian glassblowing techniques have infiltrated American glass. It began when Dale Chihuly invited several Murano maestros to do demonstration workshops. In one fell swoop, many “secrets” of Venetian glassblowing (the release of which were once punishable by death) were transmitted to the New World, changing world glass art forever.

Preston Singletary, Raven Skyriver (both Tlingit), and Dan Friday (Lummi) have Alaska and Northwest tribal affiliations as well as ties to the Chihuly and William Morris teams working at the Pilchuck School. Along with other blowers and technicians surrounding Chihuly, each artist has branched out on his own, with varying degrees of success. Singletary has international ties, and was recently honored at the Smithsonian Institution’s National Museum of the American Indian. All three have been responsible for expanding the material purview of Native American art through their re-interpretation of totem imagery, engagement of nature as subject matter, and a kinetic energy that reinvigorates tribal forms previously stuck in pre-existing natural materials like cedar bark, earthenware, and plant pigments. The use of glass is the most important thing that has happened to indigenous art in the U.S. in recent decades and, with artists’ workshops in Japan, Taiwan, Brazil, Denmark and Canada, it has been felt internationally.

All three artists develop animal, bird and marine imagery, first evolving from mythic tales, often alluding to underappreciated fish and fowl, in the process presenting the imagery of living things in a remarkably fresh and glowing manner. Without going into every single technique they employ, it is worth noting that in addition to hot glassblowing on a rod, other approaches they use are hot-glass sculpting (shaping solid hot glass), glass-casting (pouring hot glass into molds), and flat, kiln-heating, or slumping for smaller or flat glass sheets.

Singletary vigorously expands the ways that creation myths may be expressed. Considering that one of the historic challenges of glass sculpture has been size, the height of his cast-glass totems, at times over six feet, is a completely original to the totem pedigree. Totem poles, though ubiquitous as civic and commercial art in the Pacific Northwest, were never made by local Coast Salish tribes (such as Friday’s Lummi clan) but by the Tlingits, a southern Alaska tribe that provided the primary field source for legendary French anthropologist Claude Lévi-Strauss in formulating his theory of structuralism, wherein rigid power hierarchies are replaced with co-equal tasks, roles, and geographical dispersals. All this is comprehensible in Singletary’s totems. His collaborations with Skyriver and Friday (“Salish Spirit” and “Matriarch”) on view here are of interest as examples of subsuming the ego in indigenous art, given the necessity of multiple creators on the hot shop floor. Indeed, none of this art can be made by a single isolated and unassisted artist; this, too, reinforces the collective, communal nature of both tribal and glass art expressions.

Part of the problem with glass art being accepted into the contemporary art world was once this collective-creation aspect, along with the retro fabrication. No material avant-garde seemed to exist, just difficult, age-old traditions of construction. However, with the rise of postmodern art, where anything goes, even old-fashioned glassblowing — reinvented by Chihuly and the wayward Venetians in Seattle — got a hearing and viewing. This was often in contradistinction with its wild market successes — not only Chihuly’s — which conspired against embracing prevalent avant-garde aesthetics. None of these artists have made installation art comparable to Chihuly’s achievements in the 1970s, but each has adapted European traditions to convey the mysteries and symbolisms of nature.

Friday’s transmuting of feathers, animals, salmon and woven baskets into gleaming, elaborate objects has refreshed ancient myths, underscoring how current artistic expression can support prior traditions. For example, “Woven Bear” is a clear polar bear with thin colored inclusions of slim glass rods, all derived from Italy. Elsewhere, his wall-mounted fish such as “Rainbow Salmon” and “Mauve Salmon with Teal Nose” include numerous stripes of color as “skin” that grow directly out of Italian techniques associated with another Murano visitor to Pilchuck, Lino Tagliapietra, with whom all three have worked. From him they have learned how to apply a dazzling barrage of colored lines. (According to Chihuly, Tagliapietra at 88 is currently the greatest living glassblower.)

Skyriver turned to hot-glass sculptures, concentrating on marine life, as in “Galapagos Marine Iguana.” A giant Pacific octopus, “Repose,” pushes the limits of familiar glass-animal knickknacks, but its size (13 by 18 by 14 inches) moves the work into a sculptural category that is striking and dangerous-looking with its vivid red tentacles.