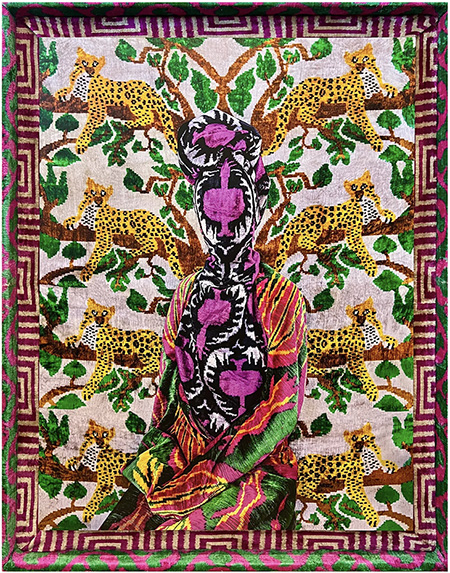 The daughter of a Bosnian mother and a Yemeni father, Alia Ali grew up in Yemen at the crossroads of Africa and Asia. As a child, she traveled widely with her migrant-linguist parents, and carries with her the evocative memories of local markets where textiles were beautifully presented, often by the creators of the fabrics themselves. These master artisans were more than merchants, they were artists and storytellers. And they were Ali’s favorite people to meet, often over tea in a cozy space. Such recollections are the basis of her art practice: she wraps her models from head to toe in patterned fabrics, photographs them, and presents the resulting prints in hand-upholstered frames.

“Blue Tides,” from Ali’s new “Liberty” series, is a photograph of a figure wrapped in Rajasthani hand-printed cotton fabric produced with traditional wood-block printing methods. The frame is a custom-built shadowbox upholstered in the same fabrics. “Blue Tides” and “Pink Palms” are mounted together against a large disc created from additional patterned fabrics. All told, there are more than a dozen dazzling textiles in this show. The title of the series refers to Liberty cotton, which was developed by Indian artisans hundreds of years ago and appropriated by the British when they occupied India. “How can one steal the knowledge of generations, divorcing them from their ancestors and from their land, in the name of freedom?” Ali asks. This is just one example of what drives the artist to use textiles to express her political beliefs.

Having traveled to 67 countries, lived in seven, and speaking five languages, Ali is constantly confronting prejudice, sexism, and racism. Consequently, political borders and oppression are always on her mind and in her work. The textiles she employs come from around the world: Yemen, Côte D’Ivoire, Sénégal, Uzbekistan, India. Whenever possible, she meets with the creators of these fabrics. The fact that Ali covers her models completely, including their faces, prevents us from imposing on them any individual bias based on gender, ethnic or racial identity. The artist transforms her figures into living works of art existing in a borderless space free from prejudice. By camouflaging her sitters, Ali grants them anonymity. The layering of the indigenous fabrics, the complexity of the patterns and the covering of the figures together create a powerful, nonverbal experience.

Ali divides her time among Los Angeles, Marrakech, and New Orleans. A love for jazz led her to title this show “Blue Note,” a reference to a note played at a slightly lower tone than conventional pitches, or in the words of Marvin Gaye, “between the cracks on the piano keys.” This microtone seems to have originated in Africa or Asia, and is at the basis of American jazz and blues.

Like the blue note, Ali’s work cannot be neatly categorized, neither as photography, textile, nor installation. Her rich palette and patterns draw the viewer in, and the figure slowly emerges from the background. It gradually unfolds with layers of symbolism and storytelling that challenge oppression and exclusion, and embrace liberation, transformation, and possibility.

According to Ali, this new series is “a love letter to those who have taught me the most about what I know of pattern, color, texture, and the expanse of the world of textile — which is the world of linguistics, constellations, cartographies, and expressions …. You’ve taught me that liberty cannot be owned, trademarked, or captioned but must be experienced.”