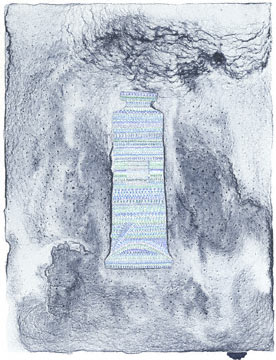 Printmaking is a studied art. There’s much deliberateness and deliberation in prints, which partly stems from the planning required for the multi-step process to make them, and partly from the way prints lend themselves to serial production. Deliberateness and deliberation are much in evidence in the work of Kimiko Miyoshi, who also injects her work with a delightful sense of play. Her show “Serial Possibilities” features 30 works from five distinct series made over the last four years – series in which she conscientiously explores both content and form, and even tries out with a new form.

The largest grouping of works in the show – a dozen prints – is from her recent "Gertrude Stein" series. During my visit to her San Pedro studio, she explains how she was inspired by Stein’s experimental text "Tender Buttons," written in Stein's typically elliptical and ambiguous way. Miyoshi especially likes these lines from the “Objects” section:

“Within, within the cut and slender joint alone, with sudden equals and no more than three, two in the centre make two one side … If the elbow is long and it is filled so then the best example is all together.”

The artist says, “It is like describing and not describing, puzzle-like."

Indeed, the "Gertrude Stein" prints both describe objects and make them mysterious. The background of each print has been made through a litho wash process with accidental eddies of color. In the center, she leaves blank an identifiable shape – such as a butterfly, a clock, an onion, a dress, a paint tube – and she fills this space with a repetitive pattern drawn by hand, somewhat reminiscent of a herringbone pattern. Thus, each print is an intriguing combination of randomness and control, and clearly both – alone and in tandem – can result in visual beauty.

Miyoshi has a bit of fun with paper itself in her “Effect of H2O on Gampi Silk Tissue” series. Gampi is a translucent paper, which crinkles after it has been moistened. She silkscreens simple designs on gampi - dots and curled-string patterns - then wets down the paper and lets it dry. These crinkled sheets are laid over an opaque, subtly-shaded sheet of paper, also with a design, creating a ghostly dimensional effect as our eye tries to focus on one layer, then the other, and back again.

By contrast, her “Manmade” series is rooted in politics and historical awareness. These are actually not prints but pictures created by fine cuts into sheets of reflective silver mylar that are made using a scalpel, which produces lines which mimic the cross-hatching style of Old Master drawings. By “manmade” Miyoshi is referring to manmade disasters such as war and global warming. In the studio she is working on a large vertical – mushroom clouds blooming atop one another in an angry salute. The image was taken from the bombing of Nagasaki by the Americans at the end of World War II, an image of total warfare that has worked its way into our collective consciousness, so we recognize it quickly. She chose this Mylar for its mirror effect, so that when we look at it we might also realize WE are in the picture – we are part of this disaster, whether as cause or victim or bystander, and therefore implicated.

Printmaking may be something of a dying art, Miyoshi admits. Then again artists do like to go against the grain, and somehow she’s even more attached to her medium because it may be disappearing. She teaches full-time at Cal State Long Beach, and has the impression students don’t find printmaking cool like painting and drawing. Of course, printmaking takes time, often lots of it, and deliberation. “I like to do things in a more thoughtful manner,” Miyoshi says, “To go step by step.”