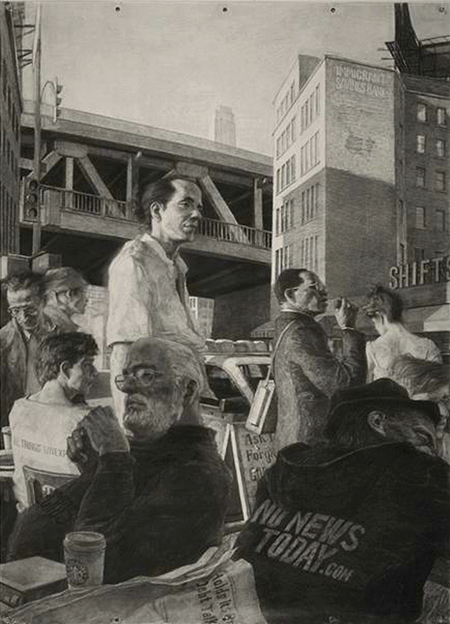 Figurative artist Yu Ji presents an impressive body of work, using as his inspiration his years growing up in China’s rugged countryside during Mao’s Cultural Revolution, where he received contraband art training from fellow detainees. Other influences include his later study of figurative artwork at Beijing’s Central Academy of Fine Art, at art schools in France and the U.S., and his lifelong practice of sketching people in public places. With this background, the artist creates detailed drawings that have the practiced artistry and emotional depth of 20th century Ashcan School works. Some of his artistic heroes, including Robert Henri and Raphael Soyer, were giants of that school.

Yu Ji, also inspired by the figurative work of contemporary painter Jack Beal, fills each of his dozen charcoal and conté drawings with obsessive details, with what he calls, “very little negative space.” His “Buy Me” features several characters in a train station, including an elderly sleeping man, a young man with a court jester-like hat and a large angel hovering over the older man. Filling a bottom corner is an open gym bag with the words, “Fun Bag.” Yet its contents combine, yes, fun objects such as the puppet Elmo, but along with a much darker skull and a hand. When asked about the symbolism, the artist explains that this one — and nearly all of his works — are based on years of observing people, on his desire to fill up every corner of the canvas and on drawing his images from his unconscious. He says, “I leave it up to the viewer to interpret them.”

Many of Yu Ji’s characters are portrayed as individuals, absorbed in their own thoughts, even while they are among throngs of people. “Passing Time” includes several elegantly dressed individuals in a café, observed through a plate glass window, each in their own world. “Without Doubt” is another grouping of four people in a public place, their dress grungier and more proletarian in nature, and each one is similarly detached. “Passing in Transit” features four well-dressed people walking up the steps of a train station, with each person visibly ignoring the others. “Traces of Fleeting Moment” depicts two chess players on an urban street, focused only on the chessboard, with two other people nearby who are oblivious to the intense game.

The artist also creates drawings that have conflicting images, asking the observer to construe the narrative in a different way. “Infinit Desires” [sic] features a man within a clothing shop, drawing the words, “Infinit Desires” onto the front facing window. He faces the street, but is oblivious to the drunk, asleep on the sidewalk just outside. In “Subway Music” a harmonica and guitar player harmoniously serenade the nearby passengers. Even in this piece, all of the members of their transient audience stare off into space.

Looking at these well-wrought drawings, along with two “Portrait Studies” of a man and a woman and 12 earlier sketchbook drawings that provided inspiration for the larger charcoals, is like viewing the endless stream of contemporary humanity, observed through the keen yet dispassionate eyes of an artist.