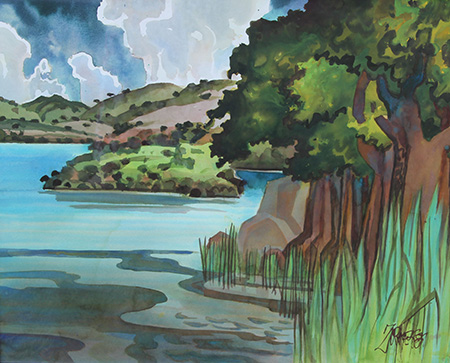 Attending a watercolor workshop with artist Milford Zornes in 2003 was an unforgettable experience, one that was both joyous and engaging. Lively and dapper into his nineties, he was delivered by limousine, then swept into the room and entranced his audience with his erudite commentary and his lightening speed skill with the brush. His generosity towards fellow artists, be they outside the art world or inside, was clearly evident. His love of life and art is conveyed in his pristine watercolors of the California scene in all its moods and caprices, as is evident in the exhibit "Milford Zornes: A Tribute," which details his 65-year relationship with the Chaffey Community Museum of Art that began in 1942.

Part of the California Scene painting group during the 1930s that included the legendary artist and teacher Millard Sheets and other Regionalist artists such as Rex Brandt, Phil Dike and Emil Kosa Jr., Zornes taught at Pomona College and traveled the world giving watercolor workshops. The California Scene painters chose "slice of life" subjects that depicted rural and urban California before the rise of freeways and parking lots. The unspoiled California was to dramatically change as urban and suburban centers encroached into the landscape. He mostly painted "en plain air," always setting up his easel and paints after determining the best view of his subject. A genius at using the fewest strokes of watercolor for the maximum effect and letting the white of the paper shine through, Zornes was painting up until he died in 2008 at the age of 100.

During his world travels, he continued to paint, including the marvelous watercolor included here, "The Source of the Nile at Ginja” (1987). Spiky green reeds contrast with the subtle blue rhythms of the river, the inlet anchored by dramatic trees topped with abundant foliage. The sky melts and disappears into the clouds and the whole is a swirling vortex of colors and forms. His view of the coast at “Monterosso” (1988) has a similar movement, as beach goers are quickly rendered, only their bright attire standing out, and boats perch on the rocky beach or float in the water,. A white castle hovers above the entire scene as Zornes recreates a shimmering summer day.

California scenes predominate in his glowing watercolors. The grey skies make the the gold and burnt siena of the landscape pop in "Over Cayucas” (1987), a stunning view of a bay of turquoise water framed by the rolling hills that also have an inherent, complex rhythm. In the stylized landscape "Morning in the Cayuma” (1981), he briskly captures the shadows and light of a brilliant fall day where the vivid orange leaves and the golden grass further illuminate the scene. “Prado” (1966) is an ephemeral watercolor that has the same elusive qualities of light and shade. Golden trees are silhouetted against a grey sky, with the vivid green of the meadow anchoring the composition.

Zornes' continues his intersecting curvilinear rhythms in "Gothic by the Sea” (1967), a marvelous visual poem of jagged cliffs and rocks highlighted in white jutting against a monochromatic sky. "Surging Sea” (1988) epitomizes the ethereal beauty of a California coastline. With its dramatic rock formations and violent surf, Zornes paints the water smashing against the shoreline and bouncing back in giant curves of glittering blue.

As the last of the California Scene painters, Zornes remained true to his dazzling watercolor style, and to representing the beauty of a California that still can be found in hidden places.