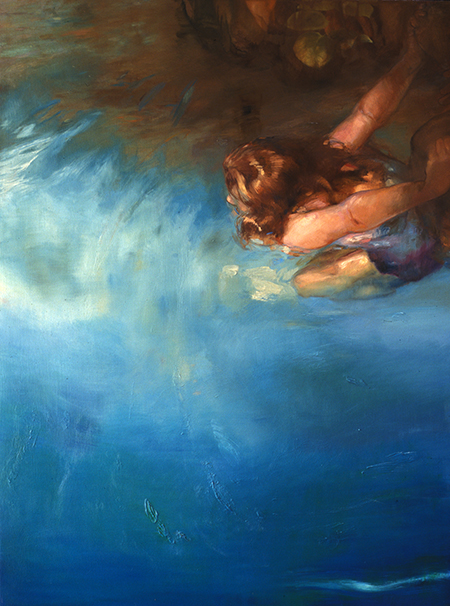 Painting appears to come naturally to Margaret Lazzari. A devoted student of the craft, her interest in the natural world and biological imagery is matched only by her ability to capture these subjects with paint. Her sense of discovery is present in each piece, yet it is obvious that she assumes a healthy and reflective stance; her realism is layered and often turns into abstraction. Lazzari’s mid-career survey, entitled “Wild Biology,” offers works from her past along with a group of new works.

The notion of "Wild Biology" grew from two of the artist’s personal experiences. One was a move to a new house, which enabled the facilitation and planting of a garden. The transformation of a landscape that began as bare sand into a lush environment has pictorial ramifications in her painting. The second stimulus took place in 2003, when Lazzari battled breast cancer. It was at this moment that everything stopped for her and provided an opening for new things to begin. Similar to her garden, this experience had a barren aspect that was followed by intense growth. It was during this time that Lazzari switched her primary media from oil based paint to acrylic. This allowed for new formal and color combinations, opening up doors and invigorating the realistic with the symbolic.

Many of these "Wild Biology" features come to the surface in "Julia Dreaming" (2010), which depicts a young women’s head (that of Lazzari’s daughter) resting gently on her own shoulder. The young woman appears to be deep in thought, and unbeknownst to her we are provided an aerial view. Organic forms are layered on her forehead and face as her mind feels full, embedded as it is with color and texture. Created just before Lazarri’s’ daughter headed off to study at college, there are a number of brush strokes that crisscross across the subject’s brain representing this exciting time in life. Interestingly, in the midst of these fluid marks are blue squares that resemble post-it notes. The artist is implying there are so many things to learn and impressions to be made at this next stage.

Lazzari has two distinct series which highlight her direction as an artist. The "Cancer Series" is an autobiographical reaction to her body as she was assaulted by the disease. From comparing her daughter’s growth inside her to the cancer that wrought havoc, it was an emotional and life altering experience. Secondly, the "Floating Series" depicts images of the human form under water. A good example is "Holding On" (1998), where a young woman reaches back and holds onto some rocks before she leaps into the void and is completely submerged in water. This series is about the physical and emotional changes we incur through life. The distortion of the water references these ideas.

Lazzari’s use of form, light, and color are intended to communicate a much richer dialogue than superficial experiences. Saturated colors and deep shadows represent the fullness of life. Classical forms or imagery represent the weight of the past, while the body potentially shares stories of pain and the sublime. In "Cosmic Aquatic Landscape” (2014) a globe-like shape melts into greens that float like a Mark Rothko painting above the shades of blue. Collage-like shapes dance in the open air, recalling early aspects of cubism. Lazzari often draws from the physical world of star clusters, aerial views, erosion patterns, entangled plants, animal life and ocean waves. Between layering these images and an intense use of color, Lazzari creates a reality that is abstract, organic, dense, symbolic and bursting with life.

Lazzari’s survey proves to be celebratory of both her use of media and the colors she chooses. Viewing the body as a vehicle for one’s spirit is an important theme for the artist. In her own words: “This work is based on the concept that our apparently solid world is mostly a void that contains dispersed specks of matter animated by vibrating energy.” Whether focusing on her notion of beauty or the onslaught of disease, Lazzari displays vital interest in exploring a diverse range of ideas, relating all to the body and its impermanence.