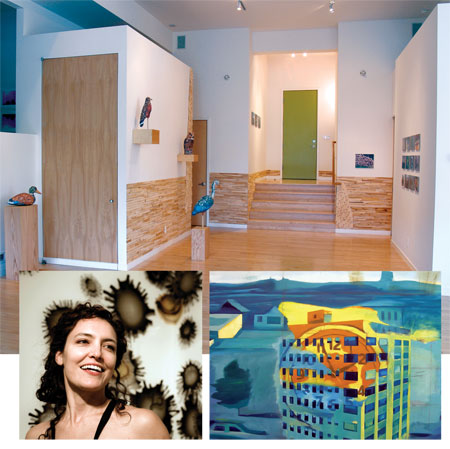 The Bay Area’s smaller cities have always been overshadowed by glamorous big sister San Francisco, but they in fact produce much of the culture that ends up in the downtown galleries near Union Square, and even in the hipster enclaves of SoMa, south of Market Street. This is particularly true of Oakland, which over the past decade has developed a vibrant art scene, often compared with Brooklyn’s. This becomes particularly evident on the first Friday of the month during Art Murmur, when some twenty participating galleries, many artist-run, stay open late, attracting sizeable crowds of young art lovers (or maybe just lovers), and decent-sized numbers of the more sedate. One regular out-of-town visitor enthused on Yelp: “Outrageously dressed people donning tutus and sipping beer from a brown bag? Check. Spontaneous vocal performances where you’re not sure if it’s an artist or a crazy person? Check. Massive crowd that could easily be defined as a mob if it weren’t for the obvious hippie vibe? Check. Huge variety of art, both disturbing and wonderful? Check. Hipsters, posers, scenesters, kids, and artists all getting along? Check. Easy to blend in or stand out...and it doesn’t matter either way? Check.”

Such carnivalesque, egalitarian extravagance might suggest hippie or New Age origins, or some marriage of Burning Man and the Bay to Breakers race, with its bizarrely costumed and even naked joggers, but Oakland’s colorful art scene developed because of the economic hijinks of the real estate market in the late ’90s. At that time, flourishing dotcom companies and a rising Dow fostered a glut of construction in San Francisco. This gentrifiers’ dream, dubbed Manhattanization by its critics, was promoted by mayors who envisioned the payroll taxes from the new corporate headquarters as the future financial base for the city, replacing revenues from failing traditional blue-collar industries. By day, the corporate creatives would work inside the new high-rise hives; by night, they would become lifestyle consumers in their live-work converted old warehouses, chichi $400K lofts completely unsuitable for messy creative work. Serious artists priced out left San Francisco in droves, finding fixer-uppers across the Bay Bridge, and Oakland, to its credit, supported the emerging art scene with modest funding and assistance (though not without an occasional prod from the fiercely committed, electronically connected art community).

Not all the artists moved from San Francisco, of course. Many alumni of Berkeley, Mills, and the California College of Arts already knew the East Bay to be relatively affordable and livable, and found ways to put down roots. The result is the current East Bay scene, centered in Oakland, but extending north to Emeryville and Berkeley, with its traditionally untraditional values, and south to the Jingletown neighborhood of Oakland and adjoining Alameda (which have just inaugurated a Second Friday art walk of their own). The youthful, do-it-yourself spirit finds congenial soil here; in addition, there is more emphasis on art making as a way of life rather than as a career path, as may be found in the pricier, more competitive and comparatively stuffier San Francisco art scene. While the East Bay is hardly “laid back” in terms of activity, a palpably more collegial, supportive spirit does prevail. There is also a wide range of venues, most of them run by artists. Nonprofits like Oakopolis, NoneSuch Space and Red Door Space in Oakland function as alternative spaces pursuing specific esthetic or sociopolitical interests, while others like LoBot Gallery and 21 Grand function as experimental spaces open to installation and performance. That said, those galleries that seek to show, promote, and sell predominantly static works of art, and help support their artists, are the focus here: galleries such as Johansson Projects and Swarm Gallery in Oakland, and Traywick Contemporary in Berkeley. The viability of the entire East Bay art scene will depend on the ability of these and other galleries to develop the local collector base and go beyond the region for support as well.

These galleries make that case. The artists they exhibit are often (but not exclusively) emerging talents in their thirties and forties who attended art school locally and make witty and sometimes immaculately crafted work from humble or unusual materials like cardboard, paper, photographs, cloth, wire, and tape. They often embrace laborious or arcane processes like paper-cutting, embroidery and stitching, as well as laborious and arcane computer design, and generally eschew overt illusionism or metaphor; in keeping with previous northern California tradition (Beat, Funk, Bay Area figuration), private narratives (about which the artists are sometimes evasive or secretive) are often involved, and art theory is accorded, in general, a proper balance of respect and skepticism.

Located uptown at the heart of the Art Murmur festivities at 23rd Street and Telegraph Avenue is Johansson Projects, known for its small arcaded gallery surmounted by artist Misako Inaoka’s mock-verdant ceiling and its wittily entitled shows (e.g., Tickling Thicket, Collapsitalism, Flaming Furbelows) of elegantly subversive objects. Representing among others, mixed-media painters/collagists Val Britton, Amanda Hughen, Tadashi Moriyama and Katy Stone, and sculptors Kristina Lewis and Michael Meyers, Kimberly Johansson has created in only two and a half years, by general critical consensus, one of the best and most consistent young cutting-edge galleries in the Bay Area.

Perhaps most significant, the two largest cultural institutions in the region are gearing up for major improvements. The Oakland Museum of California (OMCA), currently celebrating its fortieth anniversary, is undergoing a major $58 million transformation, which is to include an expansion of its landmark Kevin Roche building and a sweeping reinstallation of its numerous collections. The renovation will affect almost every aspect of the 300,000 square-foot Museum, adding new interpretive displays, storage facilities, and exhibition space for its art collection; the museum will close on August 23 and reopen in the spring of 2010, while work on the second phase of the renovation will continue until 2012. Meanwhile, the UC Berkeley Art Museum and Pacific Film Archive (BAM/PFA), under the guidance of Director Lawrence R. Rinder, is completing the design stage of a brand new building to be designed by the Japanese firm of Toyo Ito & Associates. The innovative gridlike, curving structure will bring the museum closer to the city’s downtown arts district (and to the BART mass transit line) and is slated to open in 2013.

Despite the economic uncertainty everywhere, the future of the East Bay’s art scene looks sanguine. But already the innovation, creativity and cooperation on display in Oakland and Berkeley is setting an impressive pace for the larger jewel-like city across the bay.