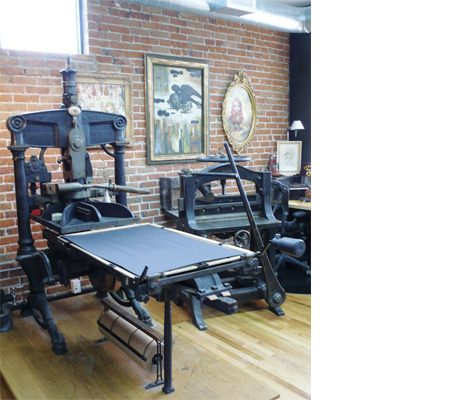 In the nearly half century since the founding of Tamarind in Hollywood in 1960, fine art printing presses have sprouted up across the West Coast and Western states with florid diversity. In the following pages, art ltd. offers a deliberately non-comprehensive field guide to a dozen of them, with an emphasis on variety. Thus we omit a number of outstanding presses, such as Arion Press in San Francisco (35 years old this year) cited prominently in our book art feature; Paulson Press, by the Berkeley waterfront, which features limited edition intaglio prints; Mixografia®, founded by the Remba family in Mexico City, and since the mid-80s based in downtown Los Angeles; and many others. Consider this survey but a starting point.

Tamarind Institute
Albuquerque, New Mexico
More than just a press, Tamarind is in many ways the wellspring from which the entire medium of fine art lithography in America has blossomed in the last half century. Founded in 1960 in Los Angeles by artist June Wayne, with a mission of stimulating the art of lithography in the U.S., Tamarind established the template of pairing a fine artist with a master printer, working with twelve guest artists per year, thanks to grants from the Ford Foundation. In 1970, Tamarind became affiliated with the University of New Mexico and moved to Albuquerque. Tamarind’s director since 1985, Marjorie Devon, notes that of the many master printers now working around the country, “a healthy percentage of those are Tamarind trained, or trained by someone who trained at Tamarind.” As Tamarind approaches its half-century mark, it has begun construction on a striking new facility to be completed next spring. Look for a range of celebratory events in September, 2010, including a survey exhibition titled “Tamarind Touchstones: Fabulous at Fifty.”

Crown Point Press
San Francisco, California
One of the progenitors of the American print renaissance, Kathan Brown, originally founded Crown Point Press as a print workshop in a Berkeley basement in 1962. The subterranean press soon began publishing portfolios beginning with Diebenkorn, and in 1971 moved to another unlikely location, this time two stories above ground, into a light-filled loft in downtown Oakland. Among the artists to traverse the narrow flights of stairs leading to the studio were the likes of Cage, Frankenthaler, LeWitt, Marden, Oliviera and Thiebaud, whose works were later included in the1997 retrospective held at the National Gallery of Art titled, “Thirty-Five Years at Crown Point Press.” Crown Point now resides on Hawthorne Street in San Francisco, where it moved in 1986, and continues to stand among the most recognizable names in contemporary printmaking.

Shark’s Ink
Lyons, Colorado
For over 30 years, Tamarind-trained Master Printer Bud Shark has collaborated with a wide range of artists in his Colorado print studio. First established in Boulder, Shark moved his press in 1998 to its current location in Lyons, just outside of Denver. Fostering a creative environment beyond the typical residency, invited artists stay at the home of Shark and his wife while working in the printmaking studios adjacent to the residence. Techniques used by artists working with Shark include etching, lithography, woodcut, monoprint and monotype. This past year, the Museum of Contemporary Art Denver held a retrospective exhibition, focusing on the work of 10 artists who have a long working relationship with Shark, among them: British artist Bernard Cohen, whose printmaking dates back to the origins of Shark’s Ink; Enrique Chagoya; Don Ed Hardy; and innovative three-dimensional lithographs by New York-based artist Red Grooms.

Hamilton Press
Venice, California
Among Ed Hamilton’s early experiences as a master printer in Los Angeles, was working at Tamarind in its heyday from 1968-69, with founders June Wayne, Clinton Adams, and Garo Antreasian. “All the decisions were being made by artists,” he recalls. “I thought that was really a neat idea.” In 1990, Hamilton founded his own press in Venice, CA, with artist Ed Ruscha. Today, Hamilton Press prides itself as being an artists’ press, working with a wide spectrum of artists, from well-known figures as Ruscha and Raymond Pettibon to significant younger artists like Gajin Fujita and Mark Licari and emerging talents like Victor Gastelum and Samantha Thomas. Notes Hamilton, “We take the concept of collaboration even further” than the artist-printer model, in that many of his artists like to collaborate with other artists. Among Hamilton’s newest projects: a boxed suite of 15 prints by Joe Goode called “Rehabilitation,” incorporating B&W photographs of paintings of Goode’s that were lost in a studio fire, “with all different colors, both underneath and on top of them.”

Cirrus Editions
Los Angeles, California
Since 1970, Cirrus Editions—and Cirrus Gallery in Hollywood—have played a prominent role in the Los Angeles print scene. Founder Jean Milant envisioned Cirrus embracing several distinct platforms, focused largely on California artists; thus it is a print workshop, a gallery and also a publisher. By its own estimate, Cirrus has hosted over 250 exhibitions, encompassing works in a wide range of media; in 1979, they moved their operations to Alameda Street, helping pioneer the cultural community of Downtown Los Angeles. In a testament to its significance, LACMA acquired the archives of Cirrus Editions in 1986 and in 1995 mounted an exhibition on the center’s then-25-year history. Artists affiliated with Cirrus range from pioneers such as Craig Kauffman and Joe Goode to younger artists like Kori Newkirk, who created three lithographs on mirrored Mylar as part of his 2008 solo exhibition at LA > < ART.

Pressure Printing
Denver, Colorado
Brad Keech is equally at home molding designs from raw lumber as he is working with antique hand presses, creating highly individual portfolios of work by his favorite artists. What makes Pressure Printing unique among print studios is the combination of graphic design, traditional and digital printmaking methods, hand-pressed embossing and unique packaging concepts that Keech creates in his multi-faceted studio. Keech initially conceived of Pressure Printing in 2000 with the goal of collaborating with artists whom he admired. He described the process of initiating these relationships as simply “talking with the individual artists one at a time, proposing projects and generating ideas.” To date, Keech has worked with key figures of Pop Surrealism and the New Contemporary movement, including Mark Ryden, Camille Rose Garcia, Gary Baseman, Kim Deitch, Scott Musgrove, Jeff Soto, and Todd Schorr.

Landfall Press
Santa Fe, New Mexico
Established by Jack Lemon in 1970, Landfall Press became a vital component of the Chicago art scene for 34 years before moving to its current location in Santa Fe. Lemon’s initial decision to open his own studio came after participating in lithography workshops at the University of New Mexico in Albuquerque in 1964 and the Tamarind Lithography Workshop in Los Angeles the following year. Originally dedicated to lithography, Landfall Press has since incorporated intaglio, etching and woodcut into their vocabulary. “It’s about finding the best medium that will translate the artists’ idea,” Chris Campbell explained, “We bend the rules around the possibilities of an image.” Among the impressive list of names contributing to Landfall’s ongoing legacy are Claes Oldenburg, Lesley Dill, Terry Allen, Judy Chicago, and Christo whose work included a wrapped collage element, and master printers such as David Jones, who, after training with Landfall Press, founded Chicago-based Anchor Graphics in 1990.

San Jose ICA
San Jose, California
The San Jose Institute for Contemporary Art occupies a unique role as a regional museum that operates its own printing press. The seeds for their program were sewn fifteen years ago with the “monotype marathon” SJICA organized as a fund-raising event. But the ICA Print Center only opened two years ago, in 2007. Under the direction of Master Printer Fanny Retsek, the ICA Print Center offers three distinct programs: a workshop program, an open access program for local printmakers, and an Artists-In-Residence program for four regional artists per year. 2009 invitees included Rigo 23, Lewis deSoto, Linn Meyers and Christel Dillbohner; the 2010 season will begin with Theodora Varnay Jones, who will also have a solo show from November 2009 through February 2010. Every three years, the ICA will feature a group exhibition of works by the previous Artists-In-Residence. “We haven’t done it yet, because we’re brand new,” Retsek explains.

Aurobora Press
San Francisco, California
After 15 years on Natoma Street, Aurobora Press now resides in a new location in the South of Market district on Brannan Street where owner Michael Liener continues his dedication to the creation of monotypes and monoprints. Liener, who laughingly described the monotype as “the bastard child of printmaking,” opened the studio as a place where artists could experiment and learn to view the press as a “creative tool,” to produce a multitude of images rather than multiples of one. Invited artists for residencies at Aurobora–which includes Charles Arnoldi, Lynda Benglis, Guy Dill, Sabina Ott, Gustavo Ramos Rivera, Fraser Taylor–and intimate workshops bring varied artistic backgrounds, which may or may not include extensive printmaking experience. Currently, artists in residence Andrew Schultz and Hillary Pecis are exploring the monotype in a multi-step process that involves cutting up and reassembling the fragmented parts to create a new whole.

Magnolia Editions
Oakland, California
Chuck Close, Ed Moses, Bruce Conner and William T. Wiley aren’t names one usually associates with jacquard tapestries, nor is “weft thread” usually common terminology for a printmaking facility. Magnolia Editions is a printmaking studio that has married digital technology and conventional weaving with a unique twist, translating pixels into textiles creating editions of tapestries instead of on paper. Magnolia Editions was established in 1981 as a traditional studio, with artists working on intaglio, collagraphy, monoprints and monotypes, artist books and public art. Since then, director Donald Farnsworth has incorporated digital technology, working to keep pace with advances in technology while maintaining an eye on hand-crafted traditions, hand-made papers, and the layered colors of the weaving palette.

Mahaffey Fine Art
Portland, Oregon
Master Printer Mark Mahaffey and his wife, artist Rae Mahaffey, first opened their print studio in 1990 in Los Angeles working out of their garage while Mark continued to work at Gemini G.E.L. After scouting different locations in the Pacific Northwest, the Mahaffey’s decided upon Portland, in part due to the encouragement of then-curator at the Portland Art Museum, the late Dr. Gordon Gilkey. Relocating in 1992 into a historic Victorian Italianate residence provided a contrasting atmosphere to the industrial environment often associated with printmaking workshops. In 2006, the association between the workshop and museum culminated with a retrospective exhibition titled, “Fourteen Artists/Fourteen Years: Mahaffey Fine Art,” and featured work from artists, one to represent each year, including Aaron Fink, Hans Haacke, Robert Morris, Margot Voorhies Thompson, and Sherrie Wolf.

Gallery 16 Editions
San Francisco, California
Griff Williams established Gallery 16, Gallery 16 Editions, and Urban Digital Color in tandem in 1993, as a means of working with contemporary artists across a range of platforms. One of the ways that Williams strove to break new ground in these ventures was his early involvement with digital printing. “When we started there was no dirtier word than Iris,” he recalls. Instead of focusing on the limitations of these new media, such as issues of longevity, Williams embraced their unexplored possibilities by inviting conceptual and video artists, along with painters and printmakers, to investigate both digital and traditional printing techniques at his studio. Since then, Gallery 16 has produced editions from such Bay Area notables as Libby Black, Ann Chamberlain, Lauren Davies, Deborah Oropallo, and Rex Ray, and produced artist books by Amy Franceschini and Andrew Romanoff.