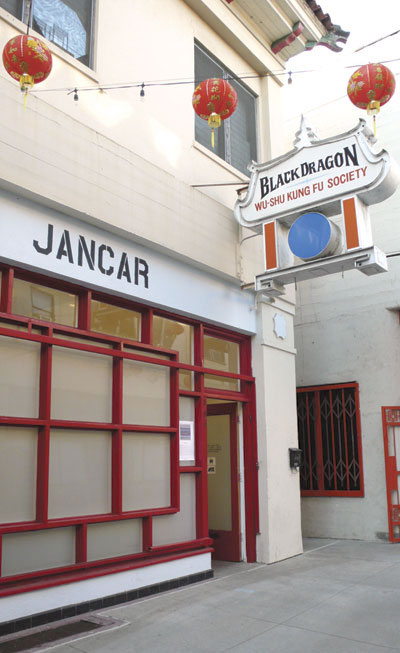 Chinatown’s historic Central Plaza celebrated its 70th anniversary this past year with a rededication ceremony under the soft glow of neon-laced Chinese architecture and a multitude of crimson and gold lanterns. Amidst these celebrations, on the other side of Hill Street, the Year of the Rat brought a scurry of activity to an arts community that has been continually evolving since China Art Objects and the Black Dragon Society first opened their doors on Chung King Road ten years ago. Among the changes, some major galleries, such as Jack Hanley, Mary Goldman, Telic Arts Exchange, and now Fringe Exhibitions have closed their doors, Peres Projects and David Kordansky have moved out, while established veterans together with new faces took advantage of these open venues.

Mara McCarthy, director of The Box, speaks positively about the atmosphere and benefits of being located in Chinatown, where “you can get away with things that would never happen in other locations.” And the daughter of renowned Los Angeles sculptor/performance artist Paul McCarthy does everything but stay within the traditional limitations of her experimental/ educational space. McCarthy regularly escapes the confines of the gallery’s walls, as evidenced by “Skid Row History Museum,” a summer exhibition that incorporated lectures, performance, and a re-created homeless “sleeping zone” designated with red tape on the pedestrian alleyway in front of the gallery.

Moving in next door to McCarthy, avid collector-turned-gallerist Charlie James, arrived from Seattle, bringing his passion for content-driven work into the space where Telic Arts Exchange once stood. His inaugural event on November 15 included Ray Beldner, Packard Jennings and Kara Maria, setting the tone for an upcoming schedule that will highlight art that “actively critiques the social and political environment while remaining accessible to a broad audience.” This past fall, Telic Arts reconfigured into multiple venues, including an underground school, a project space in Berlin, and a network of four video monitors located in the Central and West Plazas of Chinatown, known as The Distributed Gallery.

Tom Jancar, a steadfast proponent of the LA art scene since 1980, had his own reasons for relocating from his previous “destination location” atop a high-rise in the Mid-Wilshire district to this amalgamated community, simply more space and more traffic. In addition to the multi-room gallery that still bears the departed Black Dragon Society marquee next to his own, Jancar recently opened a project-space basement that creates its own unique vibe quite distinct from the rest of the gallery.

Meanwhile, Parker Jones, a former partner of Black Dragon plans to open his new Parker Jones Gallery in March 2009, located on Bernard Street, adjacent to the Chung King nucleus. This space neighbors Mesler & Hug, formerly Daniel Hug Gallery, a partnership between artist/gallery director Joel Mesler and Daniel Hug since June 2008 after Hug stepped aside from his role at the gallery upon taking the position of director of the Art Cologne Fair last May. Mesler continues to pursue the same experimental exhibition program featuring a roster of emerging national and international artists.

For David Patton, the community of galleries also provided incentive as he moved into the space previously occupied by Mary Goldman when she returned to New York after her nine years in Chinatown. Patton brings his conceptual-based vision from Highland Park to the renovated space across from one of Chinatown’s originals, China Art Objects, and newcomer Jeremy Mora’s POVevolving, which opened this past summer in a newly renovated antique store. “POV is an experimental artist run space and print shop,” Mora explains, “focused on emerging artists (such as Amy Casey and Derek Albeck), with plans to expand with a roster of performance and musicians.” These adjacent galleries, each with their own distinct venue, provide a succinct snapshot of Chinatown’s sundry accoutrement.

Partnerships and collaborations have had their fair share of renovation as well. Steven Hanson of China Art Objects, Kate Brennan from Sister and Thomas Solomon came together in a renovated movie theater to establish Cottage Home that will host a schedule of alternating events. High Energy Constructs and Solway Jones also announced a newly formed partnership in the fall, with each gallery maintaining its distinct vision in alternating shows. Conversely, some partnerships dissolved. In addition to the aforementioned Black Dragon, the joint venture Chung King Projects has been operating this year under sole direction of François Ghebaly, who took the opportunity to re-focus the vision of the gallery to support the local community by incorporating LA-based emerging and mid-career artists into his international roster, exhibiting both locally and abroad.

Galleries moving into Chinatown were paralleled by moves in the opposite direction. Notably, the prominent Peres Projects and David Kordansky both found opportunities “too good to pass up” in Culver City. Peres took up in the former site of Anna Helwing, who moved to back to Switzerland, while Kordansky moved into a newly constructed 3,300 square foot gallery slightly off the beaten path, and immediately took full advantage of the new setting with an inaugural show of monumental sculptures by Los Angeles sculptor Thomas Houseago. Back in Chinatown, Redling Fine Art made a short move across the street, into Kordansky’s vacancy, Sister moved into the former private showroom of Peres, while the fate of the newly open gallery space held by Peres remains undetermined. At least as of today.