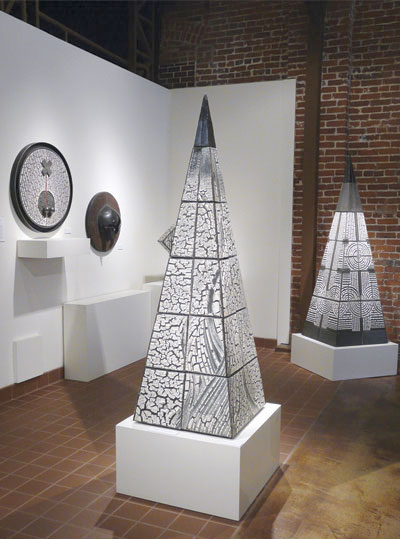 Pomona seems an unexpected center for ceramic arts activity, but the history of Southern California pottery has been embedded here for well over half a century. A major turning point came when Paul Soldner, a student of the legendary Peter Voulkos, began teaching at Scripps College in 1956—and stayed on to run the ceramics department from 1959 to 1991. Among ceramics circles, he is celebrated for developing an American raku technique and bringing the Fred and Estelle Marer collection to the college. “This collection has a special strength in post-war West Coast ceramics,” says Mary MacNaughton, director of the Ruth Chandler Williamson Gallery at Scripps, “as the Marers acquired many pieces directly from the Otis group.” Soldner also expanded the Scripps Ceramic Annual, the longest continuous annual exhibition of ceramics in the United States, from a regional into a national event.

By tradition, the Annual has been curated by an artist. In 2008 Phyllis Green put together an innovative show in which ceramicists collaborated with technology experts, pairing one of the oldest arts with the newest, digital, in “Arm’s Length In: Ceramics and the Treachery of Objects in the Digital Age.” (Disclosure: I wrote the catalog essay.) January 2009 will bring in an Annual curated by Adam Davis, Assistant Professor of Ceramics at the college, which will focus on the Scripps’ ceramics tradition.

South of the college, in downtown Pomona, is the American Museum of Ceramic Art (AMOCA), the only museum dedicated to ceramic art on the West Coast. The vision and passion of one man, David Armstrong, got it off the ground in 2004; he even opened a commercial gallery nearby to help fund the nonprofit museum. Armstrong got hooked on clay when he was attending Pomona College and decided to try out a ceramics class. It was taught by Soldner, and Armstrong ended up taking several more classes. “It’s probably the most wonderful way for self-expression,” he says.

That feeling is shared by Christy Johnson, AMOCA’s director. “I love clay, I was a studio potter for about 30 years,” she says. “I want to pass this love of ceramics on, and we do this through exhibitions and programs.” Each year they do five exhibitions, covering both modern and contemporary work, as well as historical surveys. This winter they will feature the collaborative work of Frank Boyden and Tom Coleman (through February 14), followed by “Cerámica de la Tierra,” a show of pre-Columbian pottery.

Johnson likes the variety. “I like people to come in and see the then and the now, [work from] our country and another country ... this artist and that artist,” she says. One of her favorite shows featured Susie Singer and Marguerite Wildenhain, who both came from similar training in Europe, then moved to California, but ended up producing markedly different work. “It gets people to think.”

Sometimes that variety and contrast can be seen in a one-person show, as with their recent exhibition on Robert Sperry (1927-1998). A Canadian who got an MFA from the University of Washington, Seattle, Sperry was a long-time professor of ceramics there. The show began with some of his early, more functional pieces—bowls, vases, pots—then moved quickly into his explosive and experimental style inspired by Abstract Expressionism. In these works, Sperry dripped and slashed his colors across plates, the way painters did across canvas. Sperry also liked to create bubbling effects on the works’ surface. In addition to tabletop and wall pieces, the show also included several free-standing sculptures—a dramatic gateway and obelisks built of glazed tiles attached to plywood. In Pyramid (1993) the tiles are painted with white striations over a black background (many of his works from the ‘80s and ‘90s were monochromatic).

The Armstrong Gallery is around the corner from the museum, and it offers a range of contemporary ceramics—some utilitarian, some decorative, some from regional potters, some from South of the Border. Armstrong especially likes the intricately painted work from the Mexican town of Mata Ortiz; they incorporate motifs related to the highly graphic style of American Southwest pottery. Sometimes the gallery has thematic displays; his current show, “The Pomona Tea Party” (which runs from Dec 6, 2008 - Jan 31, 2009), spotlights teapots.

Recently, both AMOCA and Scripps College had reason to celebrate: they’re recipients of special research and planning grants from the Getty Foundation that will result in exhibitions a couple years hence. These grants were given out to 15 institutions under the rubric “Pacific Standard Time: Art in LA 1945-1980,” including LACMA, MOCA, and the Hammer Museum. AMOCA’s show “Searching for Peace, Post-WWII Innovations in Clay” will focus on Millard Sheets and the studio potters of the region, while the Williamson Gallery will feature major ceramicists such as Soldner in “Clay Reconsidered: Ceramics in Southern California, 1945–1980.”