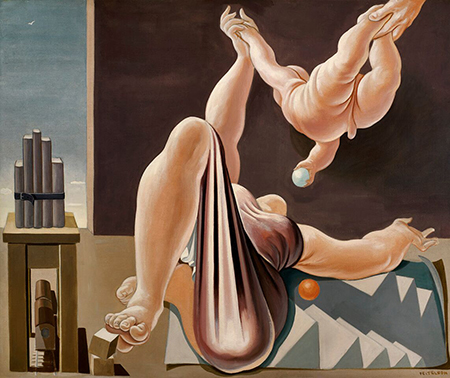 Lorser Feitelson (1898-1978) played a significant role in the Los Angeles art world, beginning when he left his native New York City for extensive stays in Paris and Italy before heading for the West Coast in 1927. In addition to being one of the founding fathers of West Coast Hard Edge painting, he served as an influential teacher of drawing and painting at Chouinard Art Institute (now CalArts). Feitelson developed strong skills in Old Master-style draftsmanship under his father’s tutelage while still in his teens. Influenced by the 1913 Armory Show, he conducted a career-long experimentation that eventually led to the Post-Surrealist work, which opens this exhibition.

In seventeen exhibited works, “Figure to Form” traces the artist’s evolution from what he referred to as New Classicism during the 1930’s, to the biomorphic abstraction of the “Magical Forms” during the 1940’s and, as he divested his painting of any last vestiges of sculptural modeling and spatial illusion, to the “Magical Space Forms” of the 1950’s and beyond. In the singular paintings of the first period, “Flight Over New York at Twilight” (1935; a trio of preparatory drawings provide insight to the compositional development), there are clues as to how Feitelson was influenced -- even as he rejected the unconscious dream-inspired basis of European Surrealism -- to focus on “the rational use of subjective elements.” The scene of mother and infant at play (only a hand cropped at the upper right corner hints at the second parent) casts domestic accoutrements such as a throw rug, books and toys so that they also read as urban high rises and stairways to some underworld. The pair of figures are posed with the kind of extreme foreshortening that declares a connection to the deeper history of 15th-century masters like Paolo Uccello and Andrea Mantegna. The gestures are open and loving, yet both faces kept hidden. It adds up to a statement of deliberate ambivalence.

As Feitelson’s reductive process gravitated towards the “Magical Forms, and these are the largest contingent of works here, his color palette opened up and explicit figuration is dropped. Only an “Untitled” 1949 work describing a form at once female and bird-like balanced on a narrow red panel thrust in space obliquely retains a component that is explicitly figurative. The forms and the space into which they are thrust — and thrust they certainly are — ground themselves with protrusions that narrow to spear points in four works of the immediate post-war period. The impulse feels, particularly in the larger context of Feitelson’s body of work, like a years-long struggle between holding firm and letting go. Looking at a 1950 “Untitled” Magical Forms beside a 1951 “Magical Space Forms” painting marks a central period of transition: the space moves from an insistent and self-conscious pursuit that finally flattens out. The 1951 painting is a straight negative-against-positive ground graphic featuring a spiky claw that screams a desire to match the aggression of the new Abstract Expressionist work coming out of New York; but the artist’s heart is not in that, and he will never test the expressive possibility of gesture.

The process by which Feitelson struggles to achieve resolution of that tension is the missing piece of the story here. From a pair of 1952 paintings, one balancing a bold yellow complexity against a very pale pink atmosphere, the second asymmetrically balancing red and lavender forms that appear to be at war with one another, we jump ten years to the final pair of paintings in the show. The relative calm and balance of the two1962 works pose a striking contrast in tone, while retaining the adherence to the rationalism that anchored the earlier work. It’s not that Feitelson went through these three long periods with the goal of achieving a long-sought harmony. That is only part of the story we see here. We also see a committed dialogue with the century’s long development of European and American art that brought him to a place of keeping only what he wanted — even as he made a consistent effort to respond to and incorporate the lessons of tradition next to the modernist avant garde.

By the time of the seminal 1959 exhibition “Four Abstract Classists” (Los Angeles County Museum of Art, curated by Jules Langsner), Feitelson had joined with Karl Benjamin, Frederick Hammersley and John McLaughlin to argue the case for a non-representational painting that would be, and remains tagged with the sobriquet of Hard-Edge. Once there, it seems that Feitelson found a permanent and hospitable aesthetic home, one that he only became further committed to for the rest of his life. What this show suggests is that the real hard edge was present in the decades leading up to the “Magical Space Forms,” and that energy gradually settled into a sensuality and pleasure born out of the original rationalism.