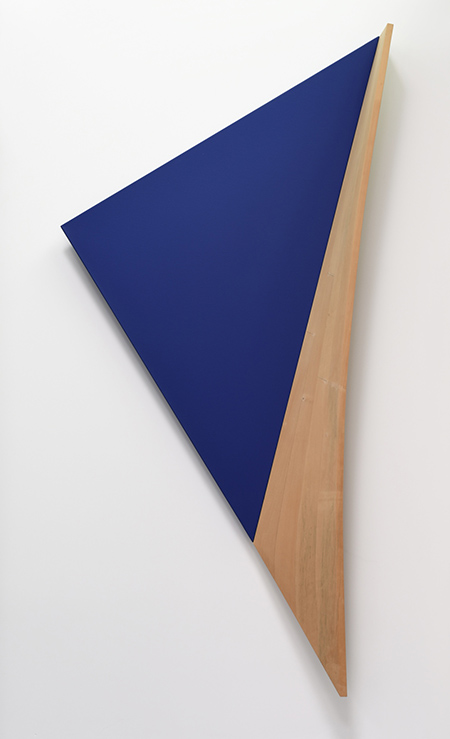 Tony DeLap (b.1927) has been making art for at least 70 of his 90 years. From a young age he has also had a keen interest in magic and as this retrospective suggests, the two might as well be interchangeable. Roughly 80 paintings, drawings, multi-media and three-dimensional works have been selected by guest curator Peter Frank. The show is timed to honor DeLap’s ninth decade and, coincidentally perhaps, the museum’s 100th anniversary.

DeLap may have taken the creating and crafting of his art quite seriously, but never himself. From the earliest inclusions, such as “Mona Lisa,”(1962) “Ping Pong” (1962) and “Flip Flop,”(1962) his works, or often their titles, exhibit a sense of humor. Those works originated when DeLap was combining spacial elements of painting and sculpture, his interest at that time. DeLap recalled titling a 1962 hard-edge painting “Gherkin” after the gallerist Robert Alcod remarked that two green circles bracketed in white and framed by a black hourglass shape reminded him of canned pickles. The whimsy flows naturally and unabashedly, as evidenced by a 1991 depiction of the iconic Eiffel Tower dissected by an orange square, as well as colorful freestanding sculptures such as “Mabel at the Wheel” and “Tango Tangles III” (both 1966).

The latter were part of a series of free-standing sculptures that DeLap created from shapes that he cut into their final form by wit and whim during a process of endless discovery that he says pervades most of his work. “Modern Times” (1966) exemplifies the process. Here the the eye is tricked into following a shadow line that suddenly appears infinite.

His shaped canvasses, with their bright, flat colors and intricate shadow plays, resulted in much of his best and most popular work. Superficially minimal, their shadows recall the magic of what Germans call Schattenspiele, a form of play where participants tell stories using hands to shape shadows on walls. “Red Daub” (1991) and “Strange Secrets” are among the best examples. Beyond this, for the artist it is always about the edge, about translating the canvas into the three-dimensional realm, as seen in “Pseudo Psychometry (1979) and “Shamus” (2004). DeLap has said that he never felt comfortable being labeled a Minimalist: “I want to complicate things, to compete, in a sense, with my ideas.”

DeLap considers the relationship between a painting and the wall symbiotic, hence the shadow. He refers to the the edges as “hyperbolic,” created by a straight line that is cut and shaped at crucial points to expose armature, or if covered in canvas giving it a three-dimensional appearance. His affinity to architecture as well as graphic design comes into play, as does his early pre-occupation with building model aircraft. Certain pieces vaguely recall the shape of aircraft wings, examples being “Mister Mirical” (2014), “Razzler” (1998) and “Shamus” (2004).

The exhibition also includes a maquette of “Big Wave” (1982), a public sculpture commission installed in Santa Monica. The nighttime installation of this work in 1989 was reported to have became a piece of performance art in its own right, replete with welders, quality inspectors, cops and colleagues stopping by. One is said to have remarked that people finally had a piece of contemporary art they could drive under. Spanning 42 feet across, the city embellished “Big Wave” 21 years later with blue LED lights in 2010.

His interest in magic is most explicit in his famed installation “The Floating Lady” (1994) first exhibited in the Orange County Art Museum. It is accompanied here by “Double Floating Lady” (1974) and a “Floating Lady Portfolio,” consisting of lithographs and other illustrations. Delap used his “magic” cards and card tricks as inspiration in a series of 1977 watercolor paintings (“Card Fan I & V”) whose circular forms recall the upside down shuffling of a magician’s cards. “You can’t have magic if you don’t have something to hide,” he says. Hence it’s up to us to deduce how the “Floating Lady” came into being — and stayed afloat.