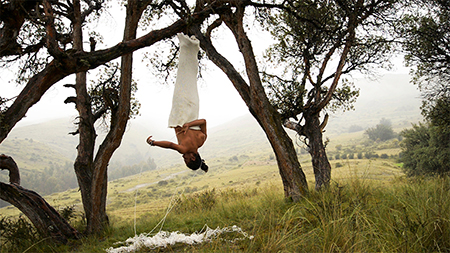 “Extracorporeal (Beyond the Body),” celebrates the life and work of the late Ana Mendieta, influential for her earth/body work and remembered for her untimely death in 1985. Given her deeply feminist perspective, it is worth noting that among the five artists here three are male.

As with many migrants, Mendieta had a mixed heritage: a Cuban transplanted to America as a political refugee. Much of what she did was grounded, literally on the ground, her outline carved out, marking her place on this earth as if she was trying to penetrate and put down roots. The rest of her work was done as she stood proudly and unabashedly naked, covering her face and body with blood or feathers, enacting rituals half remembered from her Cuban childhood.

If she had lived, Mendieta would be seventy years old, but she still inspires artists who use their own bodies in ways deeply indebted to their precursor. These past few years have witnessed a revival of interest in the work of an artist who used her own body to measure the world. Carmen Argote “built” Mansión Magnolia, seen last year at Shulamit Nazarian, during a rendezvous with her family’s history. One of the most iconic buildings of Guadalajara, the Mansión is the home of her aunts, her tias, who gave Argote permission to photograph the interiors of the neo-classical building, a place of myth and memory. Just as Mendieta returned to Cuba for her Esculturas Rupestres, Argote announced her re-occupation with her nude body, a blur hovering just above the slick black and white checkerboard floor. While she resisted carving into earth, Argote marked her place through her whimsical bouncy castle and her bristling stack of black metal chairs.

This sense of sliding between home as source and home as destination reappears in the work of Antonio Paucar, a Peruvian artist who lives in Berlin, is the creative child of two mothers, Mendieta and his mentor Rebecca Horn. His installation of dead flies, “Shoes That Break The Silence” is pure Horn with its intellectual political theme. “Suspended from a Queñua Tree” is related to Mendieta. In this slow video performance, the artist hangs from a gnarled tree, unique to Peru, and emerges from a cocoon in a ritual of birth, unwinding white thread, deconstructing the enclosure as he sways from a branch.

Rarely appearing as himself, Tadeo Muleiro makes elaborate costumes that combine a superhero appeal from comic books with traditional mythic characters from Latin legend which may or may not be authentic. Because these figures as sculptures often appear with their arms upraised in a manner similar to poses struck by Mendieta, nude, covered with mud, blending with the trunk of a tree at Old Man’s Creek in Iowa, there is a link back to the Cuban artist. The Argentine Mulerio takes the idea of transmutation a step further in his “Invasiones míticas” series in which he, in an elaborate costume covered with painted symbols, lies waiting to be born out of a vulva-like bed. Inspired by Mendieta’s idea that her work was a form of rebirth, the play "El Hijo" presets the “double” of Mulerio, returning to the womb.

Roberto Tondopó, a Chuntá from Chiapas, is part of a Native American tradition of men who function as women in the community. In “Transito” Tondopó becomes a woman through costume and ritual, another video performance about becoming something more through ceremony. This idea of transfiguration through regression also marks the work of Daniela Riojas, who in many ways, is the most obvious inheritor of Mendieta’s mantle. Like the Cuban artist, Riojas is haunted by a personal tragedy, and her art often seems to be a search for peace and exculpation. In the body work, “Don’t Let me Forget La Loba,” she calls on the higher power of forgotten female wisdom to raise the dead and the power to awaken into a new incarnation.