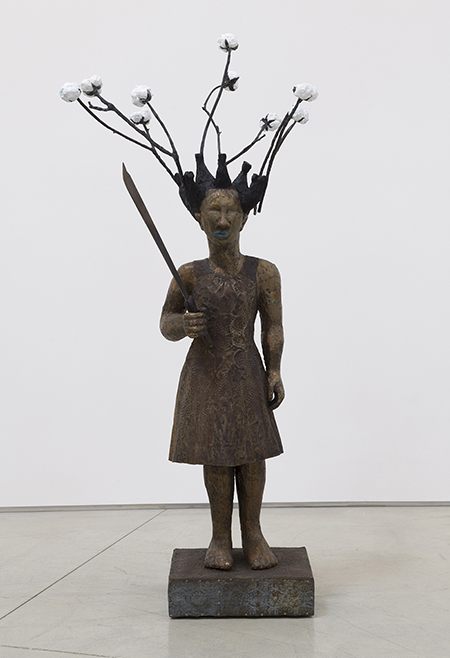 Even before the MeToo/#TimesUp movement broke wide open, Alison Saar was already developing a new exhibition about black women fighting back, a theme that is especially timely in light of events of the past few months. Motivated in part by Black Lives Matter and her personal anger over the nation's uptick in violence towards minorities, Saar had been thinking about the abuses suffered by African American women dating back to slavery. In response to these concerns, the sculptures and paintings in her new exhibition "Topsy Turvy" depict black women empowered with strength and determination. In the artist's own words, they are "ready, willing, and able to participate in the current call to arms."

In a series of five life-size sculptures and a monumental painting on fabric, Saar has armed her female warriors with weaponry that once functioned as tools used by slaves. Standing tall and proud, each woman firmly holds a different implement that, as a slave, she would have used for cutting crops: a machete for sugar cane, a tobacco knife for tobacco, a hoe for indigo, a sickle for rice, and a bale hook for cotton, the crop most commonly associated with slavery. Cotton is also shown growing from the tips of each figure's nappy hair braids, sprouting from their heads like long-stemmed flowers as symbols of emancipation.

To  create the canvas for the painting titled "High Cotton," Saar sewed together sections of indigo cloth, a process inspired by the Gee's Bend quilts made by African American women in Alabama. In Saar's painting , the same black female warriors bearing arms are lined up for duty in the foreground. Almost camouflaged against cotton fields by their dark skin, indigo garments, and white hair bows, they are emerging from their historic past as slaves, an idea that is also referred to by the indigo cloth itself. Indigo was a slave crop that originated in Africa and was commonly used for clothing worn by slaves.

Elsewhere in the exhibition, Saar returns to subjects she has explored previously, but which have taken on enhanced meaning and potency in the present moment. With the sculpture and related painting "Topsy and the Golden Fleece," Saar reintroduces the character Topsy, the physically and psychologically abused African American slave girl from Harriet Beecher Stowe's Uncle Tom's Cabin. In the late 1990s, Saar explored the theme of biracial identity in works inspired by the once popular double-ended Topsy Turvy dolls, which depict Stowe's Topsy and Little Eva, the angelic white girl from the novel, joined to one another at the waist. In Saar's new incarnation of Topsy, the black girl has stolen Little Eva's "white power" by scalping her, cutting off her hair in the way that Hercules severed the Golden Fleece from a ram. In Saar's visual telling, Topsy proudly displays the sickle used as her weapon in one hand, and Eva's golden locks in the other.

Saar's painting "White Guise (Study)" also revisits an issue that she examined earlier in her career: how historically and yet today, African Americans are treated differently based on the lightness or darkness of their skin. Painted on white flesh-toned linen, as opposed to dark indigo, the emancipated woman seen in the new work is light-skinned, and her weapon is an iron, a reference to the domestic roles that were assigned to lighter skinned slaves. To perhaps link her to that indoor environment, Saar has cleverly crowned the figure's head with a bouquet of cotton balls that could easily fit in with the floral arrangements and decorative wallpaper of a domestic interior. Be sure to look closely at the tip of the iron. The droplet of blood indicates that this warrior has been triumphant against her racist enemy as she prepares to live the life of freedom that she justly deserves.

Perhaps the most sobering sculpture is "Barrenness," in which an older woman is seated on two tree trunks, with barren branches growing from her womb.  Conceivably the mother of black youth whose lives have been destroyed by brutality, unjust incarceration or death at the hands of racists, she bears the stoic look of a sad, timeworn survivor.

Not all of the works in the exhibition come across as expressions of anger or injustice. A more exuberant tone can be found in the sculpture "Jubilee," where Topsy appears posed like the Africanized women of Picasso's "Les Demoiselles d'Avignon." In this instance, the protagonist is shown cutting off her own braids to celebrate her defeat of Little Eva and symbolizing her freedom. As monuments to black pride, "Jubilee" and the other works in the exhibition remind us that history moves in cycles, and that the time has come again to march to the tunes of "We Shall Overcome" and "Yes We Can.”