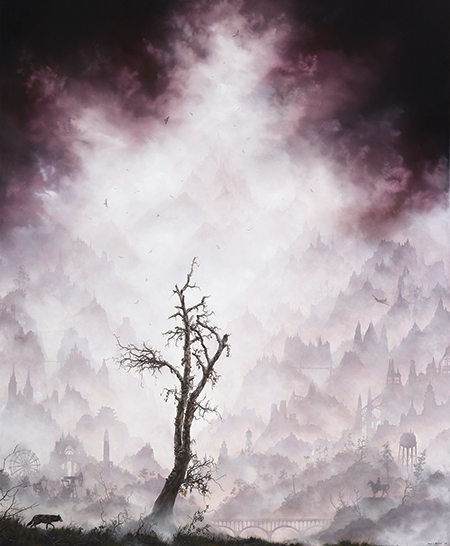 A fascination with the natural world turns eerily disquieting in ui A resident of Asheville, North Carolina, snug in the Blue Ridge Mountains, Mashburn highlights the importance of this mountain range in addition to his extensive travels around the globe. He specifically notes the effect that Southeastern China had on him, where the thickness of the atmosphere and the growing population seems to calcify open space. Titling the exhibit “Origin Stories” references both format and process as well as the history of landscape painting. Yet the color scheme, atmospheric aesthetic, and isolated imagery speak to darker tones that draw him closer to apocalyptic and desperate themes may be linked to 19th century European Romantic painters.

Landscape painting has been a tried and true genre of Western academic art since the Renaissance. The depiction of these wide open and ideal locations often featured grandiose mountains, inspiring locales, and provoked a sense of awe. Landscape painting during the Romantic period (originating in the late 18th century) emphasized the sublime through the beauty of nature. These painters made mankind feel small, and often dwarfed the depictions of animals or people as they sat at the foot of nature writ large. However, in the academic tradition landscape would often be regarded as a lesser genre in the hierarchy compared to history paintings that encompass religious, mythological or historically important subjects. Mashburn’s wide lens and stylized realism embraces this history, although his dark tones and lack of human presence contradict Romantic idealism. Instead the artist establishes a kinship with the grotesque associated with the Gothic offshoot, establishing a combination of both.

In the Eastern tradition, landscape painting has held an especially prominent role and enjoys a much longer history than in the West. The philosophical tradition of Taoism, which emphasizes living in harmony with the Tao, stimulated artists to explore this love of nature for centuries. Their sweeping and famously misty vistas were accepted as important subjects for both contemplation and delight. Historian Miranda Shaw traces landscape painting in the East back to the second century A.D., informing us that the realism utilized by Chinese landscape painters is easily confused with Western approaches. It’s not necessarily about celebrating the appearance of the natural landscape as much as it is about extracting its essential naturalness and spontaneity. This perspective further shapes Mashburn’s conceptual agenda, and provokes relationships with clear winners and losers.

“Kettle” features a silhouette of a leafless spindly tree visible within a smoky purple haze that obfuscates layers of hilltops that increasingly protrude upward as they recede into the background. These peaks and valleys are topped by familiar architectural structures that crisscross historical time and geography, ranging from bridges and oil derricks to medieval cathedrals and primitive thatched roofs. A lone wolf walks toward the tree, oblivious to these surroundings. The implied progress symbolized by the architectural features is undermined by deathly symbols of the biological world that creep into this landscape. Scavenger birds circle the city-like structures, while a frieze of vegetation at the bottom edge of the composition appears poised to mount an attack, slowly climbing the hills to cover the built environment.

In a similarly themed work “Red Bellied Woodpecker,” the titular bird serves as the protagonist. Proudly situated off-center, its lifelike qualities and stature protrude towards us. The foggy atmospheric condition moves the wilderness of small hills back in the picture plane. A castle-like set of buildings barely pop up within the forest, almost blending into the lush of leaves and trees. They appear to be in a state of disrepair and are surely abandoned. “Walking Shadows” also capitalizes on this theme. Several animals (an owl, chicken, and cow among others) gather under the cover of the fog in a densely populated forest. A note of conspiracy is felt, absent all but a hint of human population in the form of similarly decaying structures on a hill placed far in the background. Mirages of progress juxtaposed with nature, Mashburn certainly has notes that he strikes repeatedly, but continuously mixed with implied references to an end of times and a new beginning. While this origin may not be for us, the animals present sit on a throne of nature that dominates and provokes grandiose notions of power.