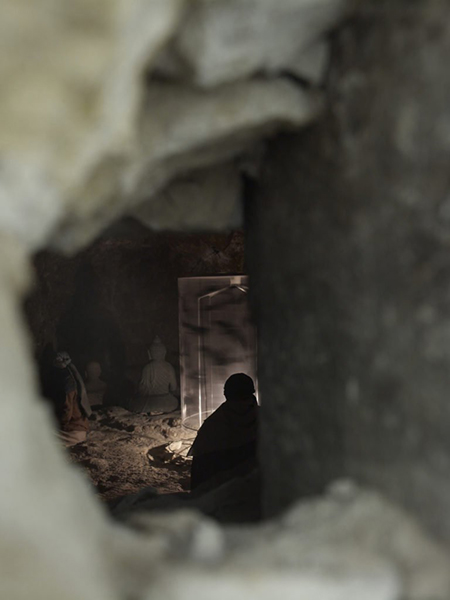 Considering Plato vis-a-vis contemporary art brings to mind Mike Kelley’s seminal “Plato’s Cave, Rothko’s Chapel, Lincoln’s Profile,” a brilliant title that encompassed a solo show, a performance and a book. This was vintage Kelley, and even for those who missed the original performance at Artist’s Space in New York in late 1985, the audio recording became something of a deep underground hit. It’s a tough Plato to measure up to, and with “Plato in L.A.: Contemporary Artists’ Visions,” which will accompany the opening of a newly reinstalled Getty Villa, we’re looking at a very different context and premise.

Kelley himself will be exhibited alongside ten other artists, including luminaries Adrian Piper, Michelangelo Pistoletto and Rachel Harrison as well as baggage-heavy Jeff Koons, though the only living L.A. artist in the show will be Paul McCarthy (Raymond Pettibon has deep L.A. roots, but is now living in New York). While it may be “Plato in L.A.,” there’s precious little L.A. in Plato, and that can’t help but be perceived as a disconnect. But no matter: the Getty is above mere provincialisms; curation comes first. And besides, as guest curator Donatien Grau insists, “Plato’s spirit is ever present in Los Angeles.” In other words, it’s not about where the work was made, it’s about where it’s seen and, for Plato’s sake, contemplated.

As of a month out from the exhibition’s opening, information on the pieces to be contributed by Piper (who’s just-opened MoMA retrospective adds serious caché to the mix), Harrison and Pistoletto (whose work hasn’t been seen here in over 10 years), wasn’t available. Known quantities of “Plato in L.A.” are France-based artist Huang Yong Ping’s “Caverne” (2009), which includes a giant resin boulder, within which resides “a resin cave, sculptures of buddhas and talibans, [and a] projected bat’s shadow” that make up his interpretation of Plato’s Cave. It’s a nice introduction to a revered avant garde Chinese artist who’s thus far remained mainly unknown to Angelenos. Paul Chan, a New York artist of formidable intellect and the founder of publishing company Badlands Unlimited, will be represented with “Le Baigneur 1,” one in an ongoing series of fan-inflated figures (not unlike the old carwash blow-up tubes, only much more sophisticated), in this case a black, headless version crouched against the wall, its itinerant shoes scattered nearby but also connected to the power cord. Pettibon’s inclusion will be two pen and ink works, one — “No Title (Plato unwaveringly)” (1987) — of which depicts what could be both the silhouette of a penis as well as the shadow of darkness coming from a cave. It’s Pettibon at his most economic (and is in a style that shares much with early Kelley drawings of that same vintage).

All that said, you can’t help but wonder if Koons’ entry, “Play-Doh,” a 10-foot-high-plus polychromed aluminum sculpture, will be by far the biggest draw, or at least hit, especially for typical Villa visitors. It’s been written about extensively as a major technical achievement for transforming aluminum into clay of such visceral verisimilitude (I haven’t seen the piece in person, but clearly the surface’s finish, ranging from full matte to a clay-like reflective shininess, proves as much). The conceit here in having a pun, or making one, to connect this piece to Plato strikes me as highly un-Getty like (read: not what you what expect from a scholarly institution), but of course there are numerous ways one could spin Play-Doh into the broad philosophical scope that is the legacy of Plato. What you can’t do, however, is present a show titled Plato in L.A., have two out of 11 L.A. artists, and not provoke a few raised eyebrows.