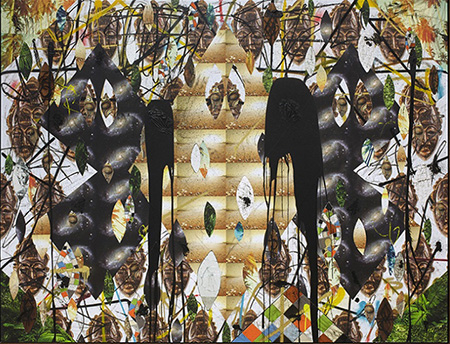 By entitling his exhibition “The Rainbow Sign,” Rashid Johnson positions the works within a spiritual and literary realm. His works reference both James Baldwin's classic book “The Fire Next Time,” and the African American Spiritual that inspired Baldwin, "God gave Noah the rainbow sign / No more water but fire next time."

On view are interrelated bodies of mixed media works that comfortably fill the large gallery spaces. The works speak not only to Johnson's impressive productivity, but also to his ability to use unconventional materials to convey his ideas. His wall-based pieces contain ceramic tiles, mirrors, oil stick, black soap, vinyl, wax and spray enamel among other elements.

“Untitled Escape Collages,” filling the North Gallery, are densely layered works that incorporate fragments from printed sources depicting lush green foliage, beach scenes and African masks that are collaged to the surface in symmetrical patterns. The two halves of the works are quasi-mirror images whose thick interior shapes are embedded with square tiles in primary colors, blobs and drips of a thick black substance that flows over the other materials, as well as oval inserts containing eyes as well as shards of broken tile or mirror. The six “Untitled Escape Collages” work together to create an unsettling utopia.

In the smaller back gallery stands a wooden table covered with shea butter — a fat extracted from the nut of the African shea tree. The rich yellow substance is strewn on the tabletop, appearing as a dilapidated pile of crud that could potentially be sculpted like clay. Some of the globs appear to resemble figures. Along the walls are four “Untitled Broken Men.” Here, Johnson embeds crude facial forms within surfaces of carefully assembled fragments of irregularly shaped multi-colored ceramic and mirror tile. There is an uncanny disconnect between order and chaos in the relationship between the tiles and the aggressively drawn marks and splatters that have invaded these surfaces like urban graffiti.

The South Gallery features a curious juxtaposition. Centered on a large, worn Oriental carpet on the floor is an assortment of “Untitled Ugly Pots” — kiln-fired and glazed clay vessels that are decorated with abstract patterns in earthen hues. In contrast to these functional objects, Johnson has installed a suite of “Untitled Microphone Sculptures.” These compartmentalized pieces are meant to function as microphones: during the exhibition’s opening Johnson invited poets and musicians to perform before the works. Although their capacity to amplify sound was not discernible when the space was empty, the power of the works was evident. The wall-based sculptures functioned as curio cabinets filled with disparate objects ranging from stacks of books by authors such as James Baldwin, Claudia Rankine, Paul Beatty and Debra J. Dickersom, to grids of white tile covered with black soap and scribbled with faces that bring Jean-Michel Basquiat to mind. Each also contains a bronze-colored screen (think windows not computer monitors) that alludes to the covering of a microphone or speaker.

While aspects of Johnson's work are aggressively rough and unpolished, it is clearly purposeful. Like many of his previous exhibitions, this one is packed with images and references. The pieces are loaded with symbolism and speak not only to the changing political climate and the struggles of African Americans, but to the possibility of change — as in the rainbow shown to Noah after the flood. There may be hope after the storm.